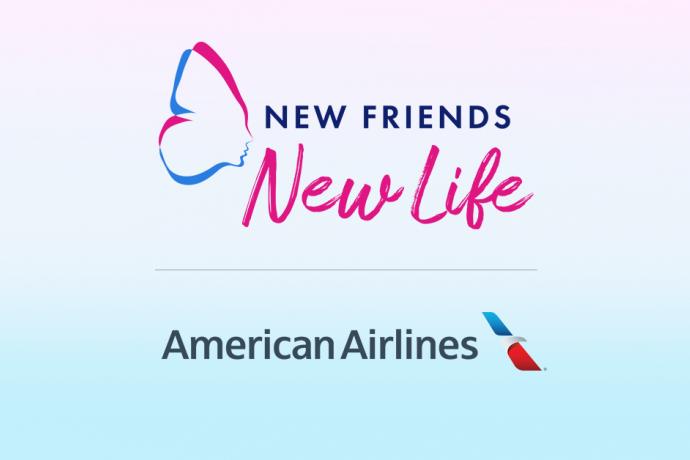 American Airlines is in the business of getting people where they want to go and caring for them on their journeys. Recently, members of the airline’s Legal team helped fulfill the company’s purpose in an unexpected way, changing one woman’s life for good.

Castanita Fitzpatrick spent 31 years in what she describes as a never-ending cycle of drug and alcohol use, homelessness and sexual exploitation. After experiencing trauma at a very early age and being abandoned by her mother soon after, the trajectory of Castanita’s life became defined by her desire to earn her mother’s love and acceptance ― even if it came at a personal cost.

She began using drugs and alcohol at 10 years old, dropped out of school in sixth grade and, at one point, hitchhiked from Chicago to Cleveland in search of her mother. In the wake of that journey, and because her mother again turned her away, Castanita was classified as a runaway and placed in a detention center. Later, Castanita became homeless and found herself trapped in a life of sexual exploitation and prostitution, which she describes as something she had no choice but to do “just to have a place to stay.”

“Off on the streets I went again,” Castanita said. “That was my safe place, because that’s all I knew.”

Several years later, Castanita would find her way from the streets to New Friends New Life (NFNL), an organization that would help change her circumstances in ways she never thought possible.

As part of the global travel industry, American prides itself on taking a leadership role in preventing human trafficking from happening on its watch. That’s why American began a partnership with NFNL in January 2020, aiming to raise awareness of human trafficking and support the needs of victims and survivors in the Dallas-Fort Worth area the airline calls home.

Around the same time, American’s Legal team, helmed by a new general counsel in Priya Aiyar, was launching a new pro bono program to enable members of the team to volunteer to provide free legal services to people in need. The department saw the airline’s budding partnership with NFNL as a ready-made opportunity for its attorneys and support staff to put their professional skills to work.

“We have an extremely talented group of attorneys and legal professionals at American who support our business in a variety of ways,” said Priya. “Knowing how much of a difference our team could make in the lives of others, we wanted to create a program that would give those team members an opportunity to use their unique skills to give back to the community. We couldn’t be prouder of the pro bono work our team has taken on so far.”

In the fall of 2020 and in partnership with attorneys at Jones Day, American participated in an initiative led by the Dallas County District Attorney’s Office, providing legal help to Dallas-area residents ― including human trafficking survivors ― who were qualified to have offenses expunged.

Soon after, Priya and McKenzie Brown, a paralegal with American, were among a small team of attorneys involved with a case in which a former human trafficking victim and NFNL member was eligible to have a prostitution charge removed from her record.

“I got the email and I said, ‘Can I do that? Can I get my record expunged?’” That’s how Castanita recounts her reaction to a message she received from NFNL counselor Hillary Owen alerting her to the possibility of having certain criminal offenses cleared from her record.

Over the next three months, Priya and McKenzie worked with Castanita to help her through the expungement process ― a process McKenzie notes would have been difficult in the absence of specialized support. On Jan. 8, 2021, the prostitution charge Castanita had been carrying for 10 years was formally expunged.

Now, as she looks forward, Castanita has new hope for what her life might hold. She says she’ll be able to get better housing in a different neighborhood, a better job, and maybe even go back to school.

“I was ready to go out and start filling out applications and putting ‘no’ by ‘ex-offender,’” Castanita said. “I feel like a new person. I get to just be a normal person without a past.”

And Castanita wasn’t the only one to benefit from the process. McKenzie and Hillary say they were inspired by Castanita’s story, her positive attitude and her commitment to healing from her past.

“We did put work in, but Castanita has been on this 31-year journey. We did some paperwork,” McKenzie said. “At the end of the day, we’re all just honored to be in on this one small part of that journey.”

Hillary described the experience this way: “At New Friends New Life, we see so many clients, and if it were up to us, everybody would have the same success Castanita had. It’s such an honor to get to witness a full-circle moment like this.”

For Castanita, there’s no overstating the transformative nature of the work American and NFNL are doing together. “You guys have given me the next part of my journey: The life I want to live,” she said.