Purple Heart Veteran, Family Get Mortgage-Free Home for the Holidays

Purple Heart Veteran, Family Get Mortgage-Free Home for the Holidays 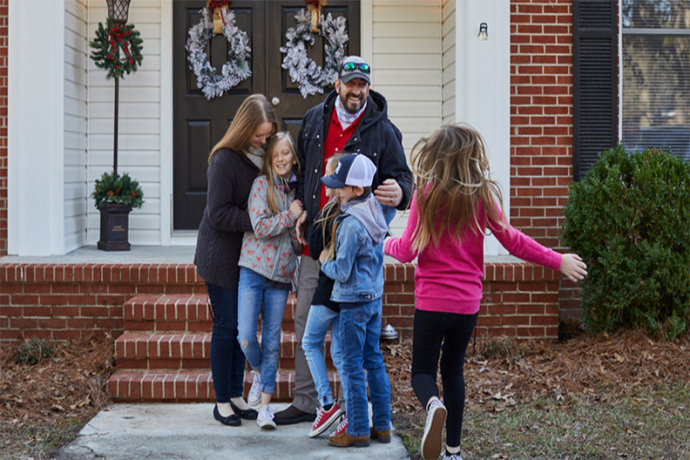 Home for the holidays! Purple Heart veteran Clint Myatt and his family celebrate after accepting the keys to their mortgage-free North Carolina home, donated by Wells Fargo and Military Warrior Support Foundation. Wells Fargo supports Military Warriors Support Foundation’s Home4WoundedHeroes program, which provides mortgage-free homes for wounded veterans and their families as well as financial mentorship to help ease the transition from military to civilian life. Since 2012, Wells Fargo has donated more than 400 homes valued at over $60 million to support veterans and their families in all 50 states.

Tarboro, N.C., December 23, 2020 /CSRwire/ - The holidays are shining brighter for a Purple Heart veteran and his family after being surprised with a mortgage-free home and holiday gifts. Retired U.S. Marine Corps Staff Sergeant Clint Myatt, his wife Jacki, and their six children didn’t think homeownership was in reach until they were presented with the keys to their Tarboro, N.C. home donated by Wells Fargo and Military Warriors Support Foundation just in time for the holidays.  In addition, the Purple Heart veteran and family were surprised to find their home filled with new furniture, holiday gifts, a pantry full of food and funds to help with moving expenses.

“My family and I are still trying to process it all,” said Retired U.S. Marine Corps Staff Sergeant Clint Myatt. “This home is perfect for us. It’s close to a community college that offers courses I need to transition into my new civilian career of being a nuclear medicine technician. We cannot even begin to thank everyone enough at Military Warriors Support Foundation and Wells Fargo for donating this home to us, and just in time for Christmas! On December 24, my wife Jacki and I, will celebrate 17 years of marriage. This home is a Christmas and anniversary gift all in one. We are truly blessed!”

Born and raised in Murray, Kentucky, Myatt joined the military in 2005 to serve his country and better support his family. He entered the Marine Corps that year and was first deployed to Iraq in 2007, and then to Afghanistan in 2010. It was during his second deployment on Dec. 28, 2010, that the vehicle he was in struck an improvised explosive device. He was badly injured and medevacked by the British military. After several days in the hospital, Myatt was moved to the Wounded Warriors Recovery Center where he was awarded the Purple Heart. Myatt returned to take back his platoon a few weeks later and finished the deployment as planned. He then was deployed once more and, upon his return, was assigned to domestic posts before he retired in 2018.

“We are honored and excited to present Sgt. Myatt and his family with a home for the holidays,” said Eileen Fitzgerald, head of housing affordability philanthropy at Wells Fargo. “We hope this is just the beginning of wonderful memories this family will create in their home. Having a safe and affordable place to call home is an essential pathway for wellness, dignity, and economic opportunity, and we will continue to create opportunities for veteran families to have a sanctuary.”

Wells Fargo supports Military Warriors Support Foundation’s Home4WoundedHeroes program, which provides mortgage-free homes for wounded veterans and their families as well as financial mentorship to help ease the transition from military to civilian life. Since 2012, Wells Fargo has donated more than 400 homes valued at over $60 million to support veterans and their families in all 50 states.

“On behalf of Military Warriors Support Foundation, we thank Wells Fargo for joining forces with us to award Retired U.S. Marine Corps Staff Sergeant Clint Myatt and his family with the best Christmas gift possible, their very own mortgage-free home,” said Ken Eakes, Executive Director for Military Warriors Support Foundation. “We are thrilled that our work together can continue helping more of our nation’s combat-wounded heroes and Gold Star families and making a difference for generations to come. Together, we can accomplish what we can only individually dream.”

Since 2010, Military Warriors Support Foundation has awarded nearly 900 mortgage-free homes through their Homes4WoundedHeroes and Homes4GoldStars program, and has assisted combat-wounded veterans, Gold Star Spouses, and their families in paying off over $22.8 million in personal debt through financial mentorship.

This holiday season, Wells Fargo is encouraging people to show gratitude to veterans like Myatt, as well as teachers, frontline workers, military members, and others for all they do by posting their thanks on social media. Wells Fargo will donate $5 to the American Red Cross for every social media post on Twitter, Facebook, and Instagram that includes the #WFGivesThanks hashtag, up to $1 million through Dec. 27.*

Since 2015, the Wells Fargo Foundation has provided more than $31 million in grants to support sustainable housing and homeownership for veterans. Additionally, Wells Fargo’s collaboration on NeighborhoodLIFT® with NeighborWorks America has resulted in helping veterans across the country achieve the dream of homeownership by providing down payment assistance grants. To date, over $7 million in grant assistance has been provided, resulting in more than 525 veterans purchasing a home.

*From 11/23/20 to 12/27/20 for every Wells Fargo card retweeted or shared on Twitter In-Feed, Instagram In-Feed, and/or Facebook In-Feed that includes the #WFGivesThanks hashtag, Wells Fargo will donate $5 to American Red Cross. (Maximum donation of $1,000,000, Wells Fargo is also guaranteeing a minimum donation of $500,000.) Social media user’s profile must be set to public in order for # share to count.

About Wells Fargo
Wells Fargo & Company (NYSE: WFC) is a diversified, community-based financial services company with $1.92 trillion in assets. Wells Fargo’s vision is to satisfy our customers’ financial needs and help them succeed financially. Founded in 1852 and headquartered in San Francisco, Wells Fargo provides banking, investment and mortgage products and services, as well as consumer and commercial finance, through 7,200 locations, more than 13,000 ATMs, the internet (wellsfargo.com) and mobile banking, and has offices in 31 countries and territories to support customers who conduct business in the global economy. Wells Fargo serves one in three households in the United States. Wells Fargo & Company was ranked No. 30 on Fortune’s 2020 rankings of America’s largest corporations. News, insights and perspectives from Wells Fargo are also available at Wells Fargo Stories. Additional information may be found at www.wellsfargo.com | Twitter: @WellsFargo.

About Military Warriors Support Foundation
Military Warriors Support Foundation is a 501(c)(3) non-profit charity, founded by LTG Leroy Sisco (Ret), in 2007. Their mission is to provide support and programs that facilitate a smooth and successful transition for our nation’s combat-wounded heroes and Gold Star families. Their programs focus on housing and homeownership, recreational activities, transportation assistance and leadership development. Through their programs, they have awarded nearly 900 mortgage-free homes and 100 payment-free vehicles to combat-wounded heroes, Gold Star spouses and their families in all 50 states. In addition to the home or vehicle, the families receive family and financial mentoring. For more information, visit MilitaryWarriors.org.