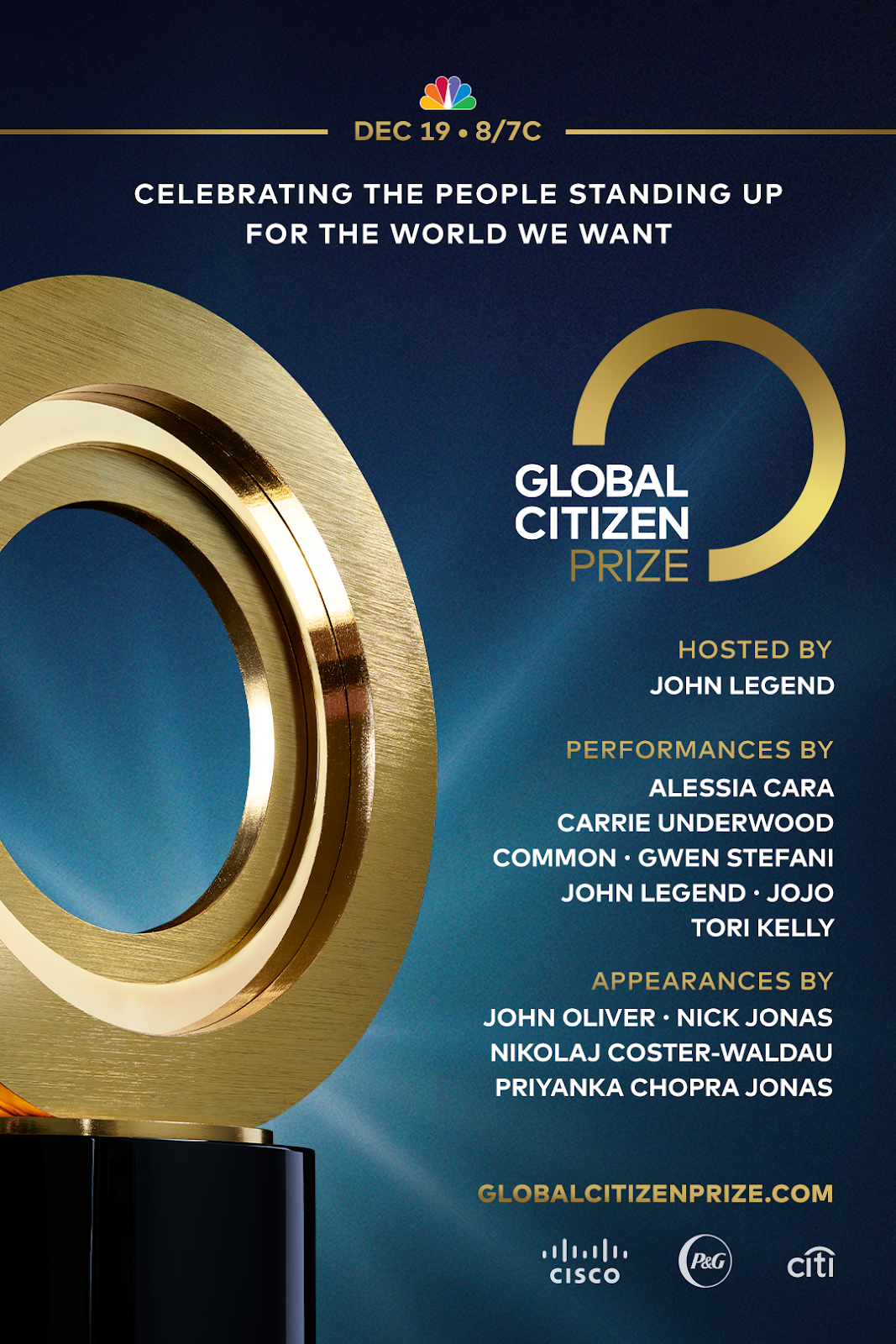 “We are honored to celebrate this year's ‘Global Citizen Prize’ winners who have made it their life’s mission to be the change we want to see in the world,” said HUGH EVANS, CO-FOUNDER AND CEO OF GLOBAL CITIZEN. “Our hope is that through this award, their leadership will inspire people all around the world to make an impact in their own communities, at a time when the world needs it most!”

Bryan Stevenson has been named as the recipient of the Global Citizen of the Year Prize, which celebrates an individual who has proven exceptional and sustained impact toward the end of extreme poverty and its systemic causes. As Founder and Executive Director of the Equal Justice Initiative (EJI), Stevenson has dedicated his career to helping the poor, the incarcerated and the condemned. Under his leadership, EJI has won major legal challenges eliminating excessive and unfair sentencing, exonerating innocent death row prisoners, confronting abuse of the incarcerated and the mentally ill, and aiding children prosecuted as adults.

Sir Elton John will receive the Global Citizen Artist of the Year Prize, which honors a creative individual or group using their platform and their work to create change not only through conversation but meaningful impact. A singer, songwriter, philanthropist, and composer, John also tirelessly works to end the AIDS epidemic through the Elton John AIDS Foundation and most recently was a leader in raising vital funds for the global COVID-19 response.

President of the European Commission Ursula von der Leyen will receive the Global Citizen World Leader Prize, which honors a political figure who advocates for and has implemented policy changes that have improved the lives of those living in poverty. Finalists for this year’s Prize also included Chancellor of Germany Angela Merkel, Chairwoman & Managing Director of the IMF Kristalina Georgieva and Executive Director of UNAIDS Winnie Byanyima. President von der Leyen has shown extraordinary leadership during her first year in office, driving significant and exemplary impact for the global community and contributing to achieving a just and sustainable future for all, in particular through her relentless work for equitable access to tests, treatments and the vaccine against COVID-19. The winner of the Global Citizen Prize was selected by an independent committee of more than 30 judges and included former Heads of States and Governments, other political leaders, and champions in the development community. The committee deliberated and gave careful consideration to all the nominees who embody the spirit of global citizens through their work, identity and community collaborations.

LifeBank Founder Temie Giwa-Tubosun will receive the Global Citizen Business Leader Prize, which honors an individual in the business community who has combined business goals with positive human impact. Recognized for her work as a health advocate in addressing blood shortages in Nigeria, as well as her innovative use of technology and the partnerships harnessed to expand LifeBank initiatives, Giwa-Tubosun is also recognized for LifeBank’s COVID-19 response, including creating a national register, launching testing centers, and free delivery of medical oxygen to COVID-19 patients in isolation centers.

The winner of the fifth category, the Global Citizen Prize: Cisco Youth Leadership Award, will be announced on December 19 during the awards proceeding. The finalists for the Cisco Youth Leadership Award, include Founder and President of Virtualahan, Ryan Gersava (Philippines); Founder and CEO of the Myna Mahila Foundation, Suhani Jalota (India); and Founder and Managing Director of Water Access Rwanda, Christelle Kwizera (Rwanda).

In addition, the Global Citizen Prize is introducing three awards, selected by Global Citizen and a team of advisors to recognize individuals or organizations who have demonstrated exceptional impact over the preceding year, creating positive change and inspiring others through compassion, innovation and unwavering dedication in their respective fields.

Warren Buffett will receive the Global Citizen Prize for Philanthropy, honoring a philanthropist, or philanthropic group, who has shown extraordinary leadership, stepping forward to accelerate their giving in support of the world’s biggest challenges and in pursuit of achieving the United Nations Global Goals. Historically the most giving person in the world, Buffett has vowed to gradually give more than 99% of his wealth to philanthropic foundations and announced earlier this year that he donated another $2.9 billion worth of stock to nonprofit groups.

Sesame Workshop will receive the Global Citizen Prize for Culture & Education, honoring an individual or organization who has excelled in creating positive change through an artistic or educational endeavor. The nonprofit Sesame Workshop has a storied history of bringing critical early childhood education to children in over 150 countries through the power of media and the Sesame Street Muppets and tackling the toughest issues facing children, like HIV/AIDS, family homelessness, autism, and most recently the COVID-19 pandemic, in ways that children not only can understand, but that also help them to grow smarter, stronger and kinder.

The Black Lives Matter movement, represented by Co-Founders Patrisse Cullors, Alicia Garza and Opal Tometi, will receive the Global Citizen Prize for Activism which honors an organization or individuals whose activism has driven significant and exemplary impact for society, at a local or global level. The Black Lives Matter movement has been awarded with the Prize for Activism, due to the powerful impact that it has had on combating anti-Black racism. The Black Lives Matter movement has also confronted socio-economic challenges that disproportionately impact disenfranchised communities and communities of color. The movement has promoted equity, enlightenment and inclusion, elevated the collective conscience of people, and BLM Co-Founders have excelled in their ability to unite people across the country and around the world.