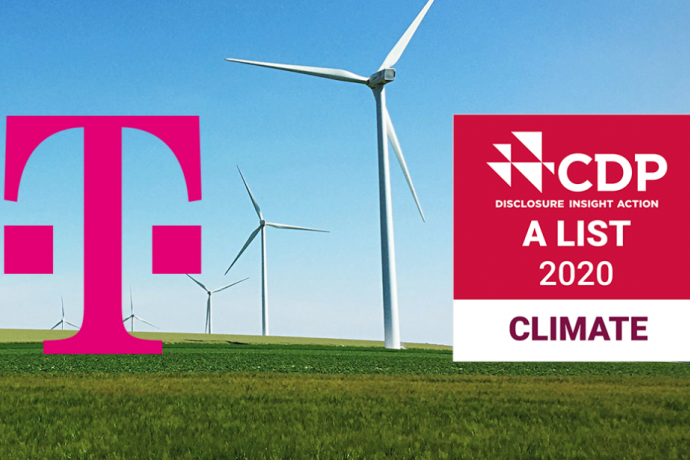 December 10, 2020 /CSRwire/ - Global environmental nonprofit CDP released its annual climate change ‘A List’ and T-Mobile was one of 270 pioneering companies — and the only U.S. wireless provider — to receive an ‘A’ grade for its leadership in environmental ambition, action and transparency.

CDP’s annual scoring process is recognized as the gold standard of corporate environmental transparency. For the last 20 years, CDP (formerly known as Carbon Disclosure Project) has asked companies to share details about their environmental awareness and leadership, including how they manage risks, best practices used in their operations and future targets with meaningful ambitions. Based on company responses, CDP assigns an A through D- scores. This year the CDP reviewed more than 5,800 total submissions.

Though T-Mobile has been a leader in the U.S. wireless industry in sustainability effort for years, this is the first time the Un-carrier has earned CDP’s ‘A’ grade. The Un-carrier’s continued progress against ambitious sustainability goals helped earn it the highest marks. For example, T-Mobile was the first major U.S. telecom to announce a 100% renewable energy goal and to have its carbon-reduction goals approved by the Science Based Targets Initiative.

“Over the past few years T-Mobile has committed to becoming a better environmental steward, and we set some ambitious goals to get there. Today I’m so proud that our team’s hard work and follow-through has paid off with a place on CDP’s coveted ‘A List’ for the first time,” said T-Mobile CEO Mike Sievert. “I love seeing T-Mobile listed alongside these impressive companies and it is really exciting that so many are taking climate change seriously and opting to be more transparent. While it’s amazing to see the ‘A List’ grow this year, there is still so much work to do. T-Mobile will continue to do our part and lead by example. Future generations are depending on us.”

T-Mobile’s ‘A’ grade reflects years of focus on bettering the environment. In January 2018, T-Mobile became the first major U.S. telecom to sign the RE100 commitment to use 100% renewable energy by 2021 and it has made huge strides toward achieving that goal, such as signing nine major renewable energy contracts with solar and wind farms, increasing renewable energy purchases by 105% from 2018 to 2019, and investing in wind power technology that produces enough electricity to power 215,000 homes each year!

Along with today’s inclusion on the CDP ‘A List’ for Climate Change, the Un-carrier’s sustainability achievements have earned top marks among U.S. wireless providers on Green America’s Wireless Scorecard three years in a row, and the EPA’s Green Power Partnership, a collective of companies leading the way in renewable energy.

And true to form, the company will not stop. As the supercharged Un-carrier, T-Mobile is not just a bigger company, but also a better one — and that includes its unwavering commitment to going even greener and doing what’s right to protect communities and the planet. For more information about T-Mobile’s industry-leading environmental goals and initiatives, visit the T-Mobile website.