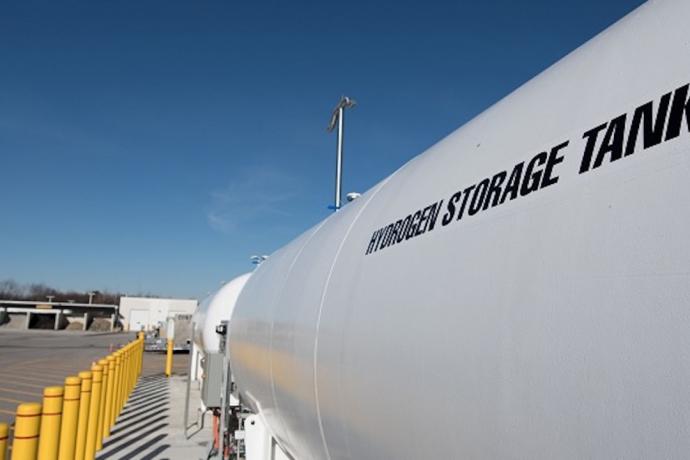 Hydrogen gas is not just colorless and odorless—it’s also an effective tool in the shift toward sustainable energy.

And it’s the foundation for a trailblazing partnership between Enbridge Gas Inc. and Hydrogenics (a Cummins Inc. company) designed to green the natural gas grid.

This hydrogen-blending pilot project, supported by Sustainable Development Technology Canada, is the first of its kind in North America—and represents an important step in greening the gas supply that millions of Ontario homeowners and businesses depend on to heat their homes and energize industry.

The renewable hydrogen gas to be blended is currently produced at an existing utility-scale power-to-gas (P2G) facility in Markham, established in 2018 by Enbridge and Hydrogenics with financial support from the Canadian government.

“I applaud Enbridge for their leadership in reducing greenhouse gas emissions through this home-grown hydrogen-blending project,” says Jeff Yurek, Ontario’s Minister of Environment, Conservation and Parks. “This kind of innovation and investment in clean, renewable energy programs aligns with the commitments in our Made-in-Ontario Environment Plan to combat climate change and help create a healthy and prosperous future for all Ontarians.”

Over the past two years, the Markham P2G facility has been converting excess energy from renewable sources into hydrogen gas, using electrolysis. The facility has been used by the Independent Electricity System Operator (IESO) to balance electricity supply and demand—and it’s proven an effective solution to the challenge of storing the province’s surplus electrical energy using existing pipeline infrastructure.

“Zero-carbon hydrogen can play a role in Ontario’s shift to lower‐carbon, sustainable energy solutions, and is an important example of investments Enbridge Gas is making across multiple markets to green the natural gas grid while continuing to meet the demand for safe, reliable and affordable energy,” says Cynthia Hansen, Enbridge's Executive Vice President and President, Gas Distribution and Storage.

This hydrogen blending pilot project will allow Enbridge Gas to initially provide blended gas distribution service to about 3,600 customers in Markham in fall 2021, abating up to 117 tons of carbon dioxide equivalent from the atmosphere.

If successful, this project will help Enbridge Gas pursue additional and larger-scale hydrogen blending activities in other parts of its distribution system.