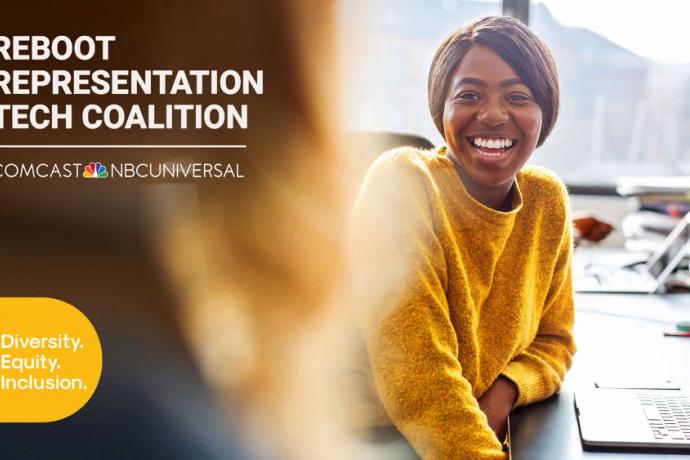 November 12, 2020 /CSRwire/ - Today, Comcast NBCUniversal joined the Reboot Representation Tech Coalition as an Executive-level partner as the Coalition works towards its goal of doubling the number of Black, Latina, and Native American women graduating with computing bachelor’s degrees by 2025.

As a global media and technology company, Comcast NBCUniversal’s commitment to addressing systemic barriers and racial justice in tech is impactful.

"The work the Reboot Representation Tech Coalition and Dwana Franklin-Davis are doing to increase representation of women of color and close the gender gap in the technology sector is inspiring and has the potential to drive real innovation and business success,” said Dalila Wilson-Scott, Executive Vice President and Chief Diversity Officer at Comcast. “Advancing digital equity has been core to our company's DNA for more than a decade and joining the Reboot Representation Tech Coalition perfectly aligns with the $100 million pledge we made earlier this year to take meaningful action to advance social justice and equality.”

The Reboot Coalition was launched after a 2018 report surveying 32 tech companies revealed that, although tech companies express a strong desire to hire underrepresented women of color, less than 0.1% of tech companies’ philanthropic donations ($335,000) focused on women of color specifically in 2017. The coalition exists to collectively pool philanthropic investments in the often overlooked programs and institutions that support Black, Latina, and Native American women.

“Comcast NBCUniversal’s commitment to our mission is clear, and we look forward to working together to create tangible and systemic change on behalf of Black, Latina, and Native American women in the tech sector,” stated Dwana Franklin-Davis, CEO of Reboot Representation.

With Comcast NBCUniversal’s commitment to the Coalition, 18 companies have now pledged $21 million to create pathways that support women of color pursuing tech careers.

Alongside its 17 existing member companies, Comcast NBCUniversal is committing to Reboot’s mission of taking action to close the race and gender gap for Black, Latina, and Native American women in tech. Reboot is committed to ensuring that the systems and institutions it invests in can better support Black, Latina, and Native American women while simultaneously growing and facilitating cultures that lead to long-term success, not just for individuals but for the industry as whole.

Interested in learning more about the coalition? Click here to learn about its mission, meet its members, and explore tools and resources.