Parents and coaches share stories of how the T-Mobile Little League Call Up Grant Program helps kids in need.

Parents and coaches share stories of how the T-Mobile Little League Call Up Grant Program helps kids in need. 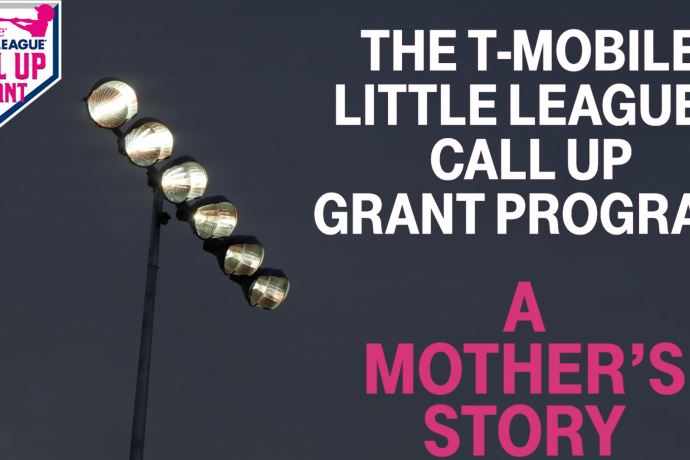 “As a single parent, I don’t get these opportunities very often for my son, but thanks to this program he was able to have the best summer of his life,” said Joanna Brown, a Little League parent from Ketchikan, Alaska.

For many parents like Joanna Brown, mother of former grant recipient Timothy Brown, Little League is something her family may not have been able to afford without financial assistance. In fact, it’s projected that one in five kids will not be able to play Little League in the upcoming season because of financial strains. For some families, missing out on the benefits of Little League is a sacrifice that proves this can be much more than just a game.

“My son has high-functioning autism, and it’s hard for him to be a part of teams and easily make friends … but he enjoyed being on that field, being up to bat and having friends in the dugout cheering him on,” explains Brown. “The camaraderie of his teammates and coaches was unbelievable, and this program made it all happen.”

It’s one of the many reasons T-Mobile is doubling its previous commitment and donating $10,000 per home run hit during the Major League Baseball Postseason to the T-Mobile Little League Call Up Grant Program — a fund dedicated to helping thousands of children across America participate in their local Little League programs by covering registration fees.

“Because of the effects of COVID-19 during the 2020 season, some families were unable to allow their children to play,” laments Reggie Reinhardt, VP of Baseball for Ketchikan Little League. “Because of financial hardship, registration fees became a burden and leagues were unable to get the extra funds from local businesses to help with scholarships for local players.”

After giving more than $1 million to the T-Mobile Little League Call Up Grant Program in 2019, the Un-carrier made it possible for nearly 5,000 children from more than 700 leagues in almost every state across the country the ability to play ball. Coaches from Alaska all the way down to North Carolina say the funds help them give hope to families that might not even try to apply because they assume they simply will not be able to afford this activity for their children.

“About 30% of all kids in our area are in the low to no income area and we end up having to pay the majority if not all of their registration fees,” says Cedrick Collins, President of the NW Little League Charlotte North Carolina District 3. “When I got the information about T-Mobile that was a huge help because we are now able to offer free registration basically to kids who were unable to pay. Some families have three to four kids and if the registration is eighty-five or even one hundred twenty dollars and that number times three or four is a great deal, and it turned them away.”

Through the MLB World Series, everyone — T-Mobile customer or not — can continue to support the cause by simply texting “LittleLeague” to 313131. For every text, T-Mobile will donate $5 — up to an additional $2 million — to support grant recipients in the texters’ local community next season.