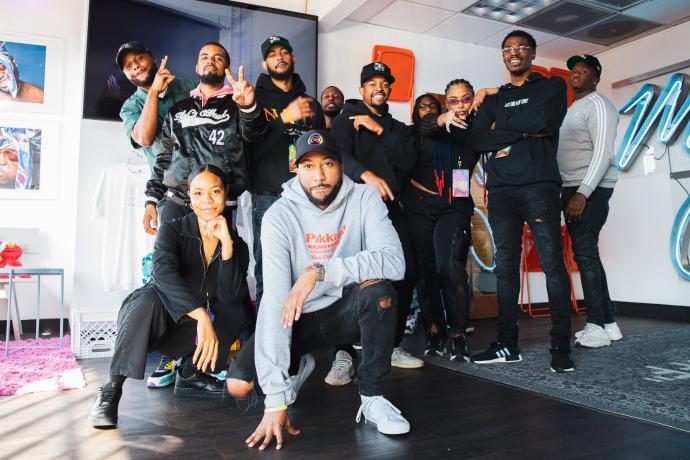 Kirkland and other creatives get in front of the camera for a photoshoot of their own. Photo by Keenan Litmon.

The Atlanta art scene wouldn’t be the same without Cam Kirk Studios. Named after owner and professional photographer Cameron “Cam Kirk” Kirkland, the studio opened three years ago as a space for creatives of all levels to sharpen their skills and conduct business.

Originally from Maryland, Cam moved to Atlanta twelve years ago to attend Morehouse College and earn a degree in marketing. He never saw himself becoming a photographer — though he jokes that the career is fitting with a name like Cam — and instead considered working in marketing for music labels. His view changed over time as he identified opportunities to he combine his talents and interests. “When I learned that I could marry my passion for music with photography, it felt like a no-brainer,” Cam said. “It was a marriage made in heaven.”

Today, hip-hop music labels regularly commission Cam and others in the industry to photograph album artwork and manage marketing campaigns. He has worked with some of this generation’s leading artists, including Gucci Mane, Young Thug, Migos, Lil Baby and 21 Savage, pioneering the genre of hip-hop photography and opening doors for other aspiring artists.

Throughout it all, Cam has focused on documenting, preserving and promoting Black culture, especially in his home city of Atlanta. He identified a need to create a “safe haven” for artists and nurture the rising Atlanta creative community. “Atlanta needed creative resources. It never felt like we had a home here,” Cam said. “I felt like it was my responsibility to pay back the city that made me.”

Cam Kirk Studios opened in the heart of downtown Atlanta in July 2017. With framed photos of Cam’s work on the walls, including an iconic black-and-white shot of rap artist Gucci Mane, the coworking space soon became a sanctuary for artists — a setting that Cam longed for when starting his own career.

“I didn't always have the support from friends or family that believed in my ideas or my vision,” he said. “We try to be that for our scene and our community here. We welcome all crazy, outrageous ideas and we help bring those ideas to life.”

The studio space is not just for photographers, but artists of all types and levels. “You'll see beginner photographers, fashion designers, models and makeup artists. It’s truly a space for all people that want to create,” he said. “We’ve had Fortune 500 companies working alongside artists who are doing their first-ever photoshoot in here at the same time.”

It was important to Cam that the studio not feel elitist or inaccessible. With about 15 appointments every day, Cam estimates that an average of 450 artists use the space each month for their various projects — including many who receive free studio time. This generosity comes from Cam’s own experiences as a young artist.

“I know sometimes spending money for a studio can be an expense that a lot of people may not be able to afford, especially if they are just starting out. I wanted to take that off people’s minds,” he explained.

Cam’s altruism has not only helped build the Atlanta art scene but uplifted the surrounding neighborhood. If he offers a free workshop or studio time to a budding artist, he asks them to volunteer their time at various community events in return. Cam holds monthly clean-ups and other service initiatives to improve the area surrounding the studio, which was recognized with a proclamation from the city of Atlanta earlier this year.

When the COVID-19 pandemic hit in March, Cam faced a difficult decision. Closing the studio would not only mean lost revenue and an inability to pay his ten employees, but also shuttering the creative resources many artists depend on to make a living. “When we're closed, the Atlanta creative scene is closed,” he explained.

“I had to sit my team down and make some really tough decisions about how we would keep moving,” Cam said. But as more details about the pandemic became available, he knew he had to keep his community safe. “As leaders, we had to make [the decision] for our community to say: ‘We need everyone to take this seriously.’ And it was scary.”

In mid-March, he closed the studio for two months. To help with the financial stress, Cam applied for a Paycheck Protection Program (PPP) loan from the Small Business Administration, which he said kept his business afloat during the closure. Then, a friend notified him about PayPal’s Empowerment Grants for Black Businesses. (The $10 million grant program, in partnership with the Association for Enterprise Opportunity, has since paused accepting new applications due to an overwhelming response.)

The grant made Cam feel recognized. “Many of my peers had been struggling to find the proper financial resources,” he said. “It was great to know that the work that we're doing here is not going unnoticed. As an entrepreneur, you can feel like it’s you against the world, but to know that a company like PayPal actually has your back and supports you is an amazing thing.”

Since receiving the PayPal Empowerment Grant, Cam Kirk Studios has reopened with limits on party sizes and social distancing in place   between parties. He used the Empowerment Grant funds to pay rent for the studio space and continue paying his employees, which in turn gave him peace of mind about the survival of the business and broader artistic community. The studio is now coming back strong, seeing increasing appointments from familiar faces and also attracting new clientele.

“I think being shuttered for months, without being able to do what we love, [has caused] that energy to come back tenfold,” Cam said. “We found a rebirth in a lot of creatives. People who were sitting at home for months with these ideas on their mind but unable to actually express themselves in a creative manner have come back to the studio with a surge.”

The pandemic has given Cam a renewed sense of gratitude for the creative community he helped build from scratch. He attributes the studio’s ability to survive a “worst-case-scenario moment” to the resiliency of the art community and the support he received from PayPal.

“That one grant is truly impacting the lives of thousands in Atlanta's creative scene,” he said. “By us receiving, we're able to give.”