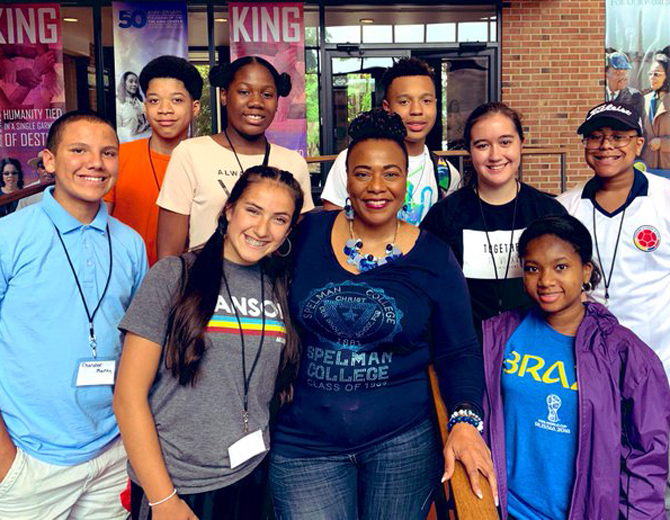 More than two dozen young people will learn to be global leaders and agents of nonviolent social change as participants in The King Center’s CampNow Leadership Academy, thanks to support from Cox Enterprises.

Through a partnership with The Martin Luther King, Jr. Center for Nonviolent Social Change, Cox is sponsoring scholarships that will send 25 students through the 2021 CampNow program.

The Martin Luther King, Jr. Center for Nonviolent Social Change is a nonprofit dedicated to educating the world on the life, legacy and teachings of Dr. Martin Luther King, Jr., inspiring new generations to carry forward his unfinished work, strengthen causes and empower change-makers who are continuing his efforts today.

CampNow Leadership Academy begins with a two-week summer leadership development experience where youth ages 13-18 develop and enhance their leadership, critical thinking and teambuilding skills. The academy prepares youth to be global leaders and change agents as they engage in the six principles and six steps of nonviolent social change based on Dr. King’s philosophy.

After the two weeks, the program continues for a year with monthly gatherings, group presentations and a capstone project centered on community engagement.

The contribution is part of the $1 million fund Cox created earlier this year to help champion inclusion and support organizations that work for social justice and civil and human rights. Cox employees helped determine where these funds should go, and identified three key areas around racial discrimination, criminal justice and quality education.

Other organizations receiving support from the fund include the National Center for Civil and Human Rights, the Equal Justice Initiative, UNCF and National Urban League.

A Proud History of Civic Engagement

At Cox, we have a long history of family civic engagement. The year 2020 marks the 100th anniversary of Governor Cox, our founder, running for president (with Franklin Delano Roosevelt as his running mate). A tradition of patriotism and civic duty runs through our roots. It's a part of doing the right thing. Always. Gov. Cox was dedicated to serving in public office and educating the community through quality news and journalism. That commitment remains in the foundation of our values today and is reflected in our company’s purpose: Empower People Today to Build a Better Future for the Next Generation.