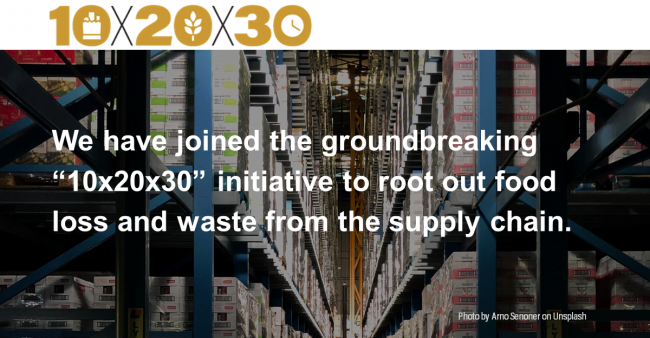 Today General Mill joins retailers Ahold Delhaize and Carrefour in the groundbreaking “10x20x30” initiative to root out food loss and waste from the supply chain. 10x20x30 is led by more than ten of the world’s biggest food retailers and providers, each having committed to engage at least 20 suppliers in a “whole supply chain” approach to halving food loss and waste by 2030. General Mill is one of Ahold Delhaize and Carrefour’s major suppliers for consumer packaged goods.

General Mill commits to a 50% reduction target for food waste in its own operations, to measure and publish its food loss and waste inventories, and to create actionable strategies to reduce this waste.

“When less of the world’s food gets wasted, everybody wins,” says Nicola Dixon, Executive Director, General Mills Foundation. “This is true from a social, economic and environmental point of view. We are inspired by the level of cross-sector collaboration seen in the 10x20x30 initiative, and know that by aligning  goals, actions and resources in the food system, we can achieve the goal of halving food waste by 2030, and ensuring that more good food goes to nourish those in need.”

The food retailers and providers behind 10x20x30 include AEON, Ahold Delhaize, Carrefour, IKEA Food, Kroger, METRO AG, Migros (Turkey), Pick n Pay, The Savola Group, Sodexo, Tesco, and Walmart. Among them are six of the largest food retailers in the world, the world’s 2nd largest food service provider, and leading food retailers in regions such as southern Africa, the Middle East, and Japan. Combined, participants operate in more than 80 countries.

General Mills’ Mary Muldowney, recently appointed to the position of global sourcing sustainability director, will be engaging teams across our Supply Chain organization to plan and execute the actions required to ensure General Mills meets or exceeds our public commitment to reducing food loss and waste within our operations.

10x20x30 was publicly launched at the 2019 annual food loss and waste summit hosted by Champions 12.3, which General Mills is part of as a “Friends of Champions 12.3.” Champions 12.3 is a voluntary coalition of executives from business, government and civil society committed to raising ambition and motivating action to achieve the United Nations’ Sustainable Development Goal (SDG) Target 12.3. SDG Target 12.3 calls for a 50% reduction in food loss and waste worldwide by 2030. The coalition inspired and helped develop 10x20x30, with World Resources Institute as co-secretariat of Champions 12.3 and lead provider of technical assistance to the 10x20x30 retailers and suppliers.

“Reducing the more than 1 billion tons of food that’s lost or wasted each year would bring big social, environmental and economic benefits – but bringing these benefits to scale requires action across the entire supply chain,” says Dr. Andrew Steer, President and CEO, World Resources Institute. “I’m encouraged to see so many leading food retailers and suppliers like General Mills committing to bold action. It’s exactly what the world needs to achieve the target of 50% reduction by 2030.”

Each year, one-third of all food produced in the world is lost or wasted, resulting in significant economic, environmental, and food security impacts. This amount of food loss and waste equals $940 billion in economic losses annually. It is responsible for 8% of global greenhouse gas emissions. And while more than 1 billion tons of food is lost or wasted annually, 1 in 9 people is undernourished.

10x20x30 is one among several initiatives General Mill is engaged in to improve sustainability.