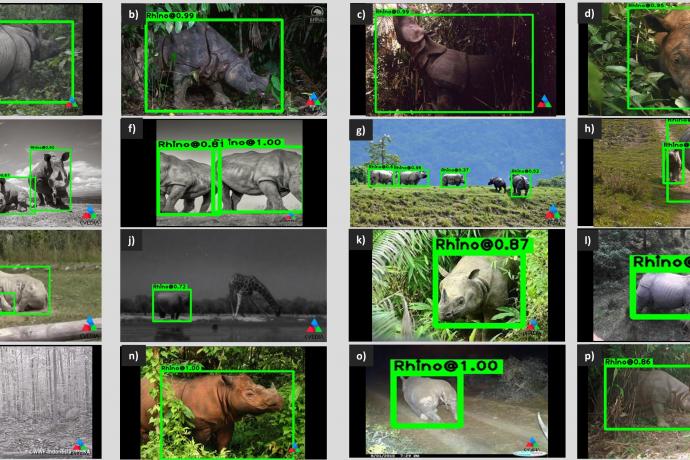 The Rhino Detector can accurately detect all five species of rhino (above). It will run on WildEyes AI cameras (10 cameras shown below), which can be easily concealed in vegetation to prevent theft, vandalism, or damage from wildlife.

On World Rhino Day 2020, RESOLVE and CVEDIA announce a novel solution to protect the world’s endangered rhinoceros species from extinction in the wild and to better monitor their recovery efforts. This new low-cost technology allows real-time detection of rhinos and illegal intruders, and transmits images as alerts to protection forces to prevent the slaughter of defenseless rhinos. Using new advances in artificial intelligence technology, RESOLVE’s tiny camera system, called WildEyes™ AI, works remotely, hidden from the poacher’s gaze. When the camera’s motion sensor is triggered, it uses computer vision to detect rhinos or humans in the frame and transmits those images in near-real time to the smartphones of rangers, park directors at Headquarters, and other designated parties to afford greater transparency in reporting. Placed strategically along suspected poacher trails, the cameras send alerts to command posts, which can trigger a rapid response by park authorities to protect these rare animals and arrest poachers trying to set snares or shoot rhinos.  A major challenge to protection efforts is that several of the rhino species are territorial and sparsely distributed over large areas, and thus harder to patrol effectively. Many of these parks are underfunded and struggle to keep ranger staff paid and properly equipped, and the COVID-19 crisis has exacerbated these difficulties. What is needed now is new technology to serve as a “force multiplier”, where a staff of 150 rangers can be as effective as 1,500 by responding within minutes to near-real time alerts of entry by poachers and to stop the poachers before they kill. 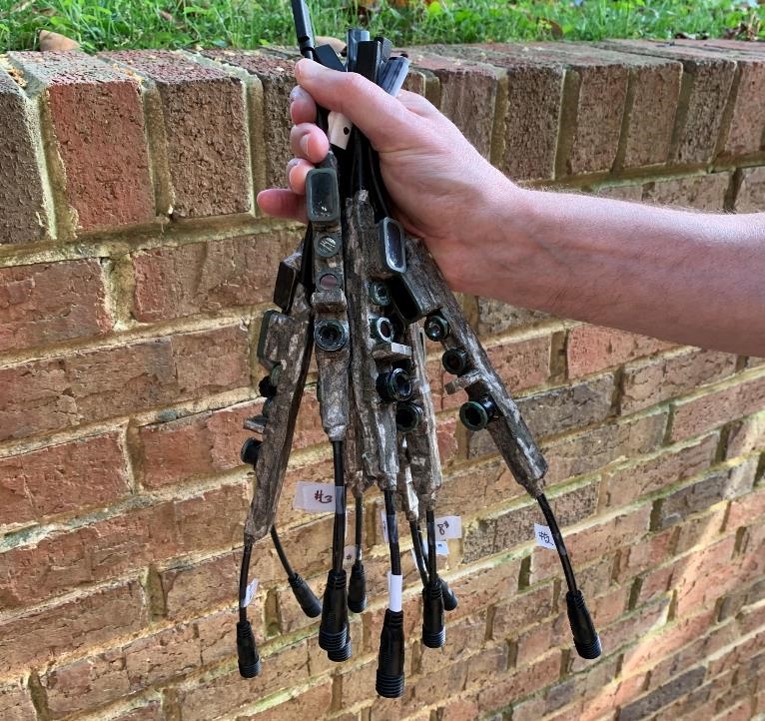 This new technology cannot come soon enough. Although international rhino horn trade has been banned under CITES since 1977, rhinos in Africa and Asia continue to be persecuted for their horns, which are reported to be valued at $65,000 per kilogram in illicit Asian markets. Many populations of the five species have suffered precipitous declines due to relentless poaching in the past few decades. Combined across all species, perhaps no more than 30,000 wild rhinos are alive today. The last wild northern white rhinos were hunted to extinction in 2018 and the Sumatran rhino has disappeared from the island of Borneo and is now restricted to three small populations in Sumatra. The Javan rhino may be the rarest large mammal on Earth, limited to a single park in western Java and numbering under 75 individuals. Less than 3,700 greater one-horned rhinos and only about 5,000 black rhinoceros remain in the wild. Only the southern white rhino occurs in numbers estimated at 22,000 individuals across about 467 populations.

How it Works: The sophisticated AI algorithm detects both humans and rhinos. The detector is based on synthetic data models created by CVEDIA, running on the Intel Movidius vision processing unit (VPU) embedded in the WildEyes AI camera. The camera remains asleep until the motion sensor is triggered and then, leveraging the AI algorithm, the Intel VPU filters out false triggers. The images can be sent from the camera to either the cell network or via a radio link in areas lacking cell coverage, to the Internet, and back to park HQ in about 2 minutes. By filtering “on the edge” (i.e., only transmitting true positives of rhinos or humans), the camera conserves vital battery life. Due to the VPU’s low power requirements, WildEyes AI can run for more than 1.5 years on a single charge of its small rechargeable Lithium Ion battery—a game changer for a field-based sensor.

“This wildlife camera system can detect rhinos and those who seek to do them harm. With the tremendous partnership and support of Intel and CVEDIA engineers, we can contribute to reducing one of the world’s most pressing wildlife management problems—to stop the poaching of rhinos to extinction,” said Steve Gulick, inventor of TrailGuard AI and its offshoot, WildEyes AI and Chief Technology Officer of WildTech@RESOLVE.

Enhancing Monitoring of Rhinos: WildEyes AI, running the Rhino Detector, has another important application: monitoring rhino recovery. Current monitoring approaches for endangered large mammals rely on radio-telemetry, field observations, and aerial surveys, but are resource intensive; their limitations are much more pronounced in dense forested or grassland environments where the three Asian species reside. Among the five rhino species, only the body shape of the Greater one-horned rhinoceros allows it to be fitted with a traditional radio collar. For the black rhino and white rhino of Africa, transmitters have to be placed in the horn, but these are short-lived. More effective is to place WildEyes AI cameras running the rhino detector at water holes where the African species congregate, or at forest wallows where the Asian species meet and cool off. To retrieve and process data from the field creates a lag time between event and detection, ranging from weeks to months. A network of cameras running the CVEDIA rhino detector strategically positioned within rhino home ranges can autonomously detect rhinos 24/7 with high accuracy and near real-time notification capabilities, an affordable alternative to traditional surveys or to support existing monitoring efforts. For very small populations, such as for the Sumatran and Javan rhinos that live in dense tropical forests, photo-ID would greatly advance protection and population estimation.

“I wish there had been a technology like WildEyes AI when I was conducting a photographic-based census of rhinos in Chitwan National Park in Nepal in the late 1980s. Rhinos are easy to tell apart compared to most large mammals: a combination of horn size and shape, cuts to the ears and other scars, and extra skin folds distinguish rhinos as individuals. Soon, we will also be able to run Re-Identification algorithms to determine if a specific rhino has been previously detected by the camera’s software. This will be a revolution in monitoring these endangered species,” said rhino biologist Dr. Eric Dinerstein, co-inventor of TrailGuard AI and WildEyes AI, Director of the project at RESOLVE, and author of The return of the unicorns: the natural history and conservation of the greater one-horned rhinoceros and the chapter on rhinoceroses in the Lynx Encyclopedia Handbook of the Mammals of the World.

“By combining our advanced human detector with the new rhino detector, we can have a big impact on protecting endangered rhinos. Using our unique approach to creating AI algorithms trained on synthetic data, in under three weeks, we were able to create a detection algorithm with high accuracy that processes using very low power inside the camera itself. Our Rhino Detector is trained on all five species of rhino so it is agnostic to the species. Because range overlap is rare, or non-existent in most parks, classifying rhinos by species is not of concern in this use case. We’re excited about our partnership with RESOLVE and are just getting started: detectors for other high-value wildlife species such as elephants, tigers, snow leopards, wolves, and bears, have already been developed and soon we will create regional detectors and classifiers for multiple species to run on the edge,” Arjan Wijnveen, CEO of CVEDIA.

RESOLVE is a Washington, DC-based non-profit organization that forges sustainable solutions to critical environmental, social, and health, challenges by creating innovative partnerships where they are least likely and most needed. RESOLVE’s Biodiversity and Wildlife Solutions Program tackles the most pressing conservation problems of our time—the approaching extinction of endangered wildlife and threats to habitats, including tropical forests where most of the world’s species reside—through technological innovation, ambitious global agreements, and targeted land protection.

CVEDIA is an AI solutions company creating machine learning algorithms for applications where data is limited or unavailable. We’ve mastered synthetic data for computer vision, using a combination of data science and machine learning against a backdrop of 3D design.

RESOLVE builds strong, enduring solutions to environmental, social, and health challenges. We help community, business, government, and NGO leaders get results and create lasting relationships through collaboration. RESOLVE is an independent organization with a thirty-year track record of success.