Special programming, activations, PSAs and social media campaigns will emphasize the importance of registering to vote and educate viewers on the voting process 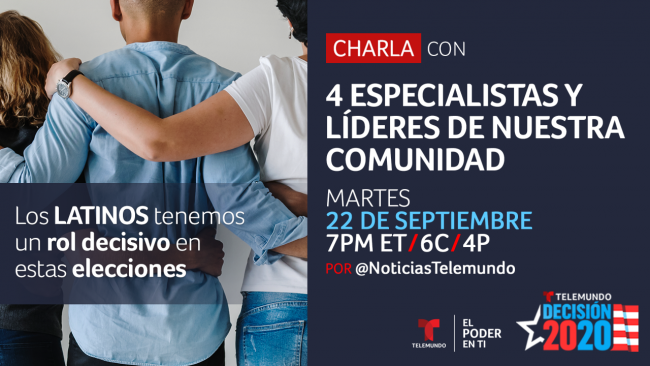 NBCUniversal Telemundo Enterprises, the leading media company serving Hispanics in the U.S. and Puerto Rico, will be celebrating National Voter Registration Day today through a national, multiplatform campaign aimed at informing and motivating eligible Latino voters across the U.S. to participate in this year’s historic election. The efforts, taking place during Hispanic Heritage Month, will highlight the decisive role that Latino voters will play in the 2020 elections and feature cross-platform civic engagement opportunities for Telemundo’s audience, including a national phone bank, a webinar series, tools and resources and Public Service Announcements (PSAs) encouraging viewers to register to vote and plan their vote.

This year marks the first general election where Latinos are the largest ethnic group eligible to vote, accounting for a projected 13% of the electorate, or approximately 32 million Hispanics voters. Since July, Telemundo has been focused on educating and energizing this audience to register to vote through its ongoing non-partisan Decisión 2020 campaign, under the banner of the award-winning corporate social responsibility initiative “El Poder En Ti” (The Power in You). National Voter Registration Day marks a culmination of these efforts.

“Latinos have enormous power to shape the outcome of the 2020 elections. At Telemundo, we are dedicating our platforms and resources to ensure that our community is empowered to vote and informed on how to do so safely during the pandemic. Together with our partners, we hope to inspire millions of Latinos to recognize and honor the importance of their vote on National Voter Registration Day and beyond,” said Christina Kolbjornsen, Senior Vice President of Corporate and External Affairs at NBCUniversal Telemundo Enterprises.

As part of its Decisión 2020 campaign, Telemundo has been operating a sequence of bilingual phone banks in partnership with the Hispanic Federation to encourage Latino voters to register to vote. On National Voter Registration Day, a national phone bank will run from 8am to 10pm EST, with operators on standby to ensure callers have all the information they need, not only to register but also to navigate the rules and restrictions associated with voting during the COVID-19 pandemic. Since July Telemundo has hosted a series of voter registration phone banks that have resulted in over 11,000 calls received nationwide.

The network has also launched “Planifica Tu Voto,” a Spanish-language version of NBC News’ “Plan Your Vote” tool which provides a state-by-state guide of the voting process, including the most up-to-date information as procedures and regulations are announced in real time.

Telemundo’s Voter Registration Day efforts will tap into the power of the Latino electorate, which is growing across the nation and particularly in key swing states. This voting block skews young; 3.6 million Latinos will turn 18 in time to vote this November. Telemundo recently released a report with BuzzFeed News, “Young Latinos: A Generation of Change,” which found that 64% of Latinos aged 18-34 “definitely” plan to vote in November.

About NBCUniversal Telemundo Enterprises
NBCUniversal Telemundo Enterprises is a world-class media company leading the industry in the production and distribution of high-quality Spanish-language content to U.S. Hispanics and audiences around the world. This fast-growing multiplatform portfolio is comprised of the Telemundo Network and Station Group, Telemundo Deportes, Telemundo Global Studios, Universo, and a Revenue Strategy & Innovation unit. Telemundo Network features original Spanish-language entertainment, news, and sports content reaching 94% of U.S. Hispanic TV households in 210 markets through 30 local stations, 50 affiliates, and its national feed. Telemundo also owns WKAQ, a television station that serves viewers in Puerto Rico. Telemundo Deportes is the designated Spanish-language home of two of the world’s most popular sporting events: FIFA World Cup™ through 2026 and the Summer Olympic Games through 2032. Telemundo Global Studios is the company’s domestic and international scripted production unit, including Telemundo Studios, Telemundo International Studios, Telemundo International, Underground Producciones, an internationally renowned production boutique based in Argentina as well as all of the company’s co-production partnerships. As the #1 media company reaching Hispanics and millennials online, the Revenue Strategy & Innovation unit distributes original content across multiple platforms, maximizing its exclusive partnerships with properties such as BuzzFeed, Vox, and Snapchat. Through Telemundo Internacional, the largest U.S.-based distributor of Spanish-language content in the world; and Universo, the company reflects the diverse lifestyle, cultural experience, and language of its expanding audience. NBCUniversal Telemundo Enterprises is a division of NBCUniversal, a subsidiary of Comcast Corporation.