Your Vote, Your Choice: Commemorating 100 Years of Women's Right to Vote 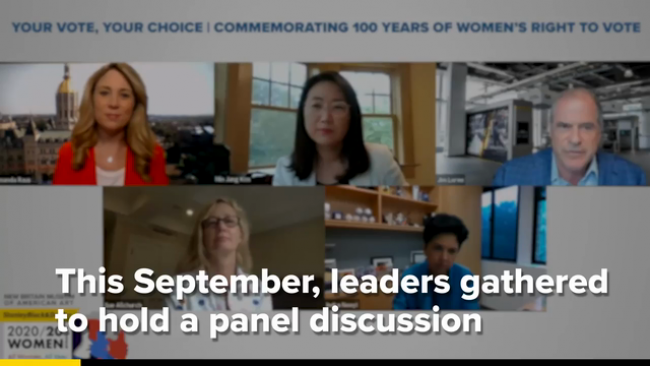 Stanley Black & Decker and The New Britain Museum of American Art hosted a panel discussion focused on the centennial anniversary of women’s suffrage as part of their collaborative 2020/20+ Women @ NBMAA initiative.

The panel was moderated by award-winning journalist and anchor for Fox 61 News, Amanda Raus and featured local leaders:

The panel discussed the important role companies, communities and local government can take in creating gender parity in the workplace. “We as a company, joined Paradigm for Parity on International Women’s Day this year, which is a coalition of fellow leaders who have made a commitment to achieve gender parity by 2030,” said Jim Loree. “If we don’t achieve this, according to the World economic Forum, it may take as long as 157 years to accomplish that goal. So, this is an opportunity to accelerate progress and to make a difference in that regard.”

Leaders also left the audience with words of wisdom for the next generation of female leaders. “I tell my kids and I say this to all young girls in particular, ‘Dream Big,’” said Indra Nooyi. “You can be anything you want to be, and don’t get held back by any historical biases, dream big.”

Learn more about our Diversity and Inclusion efforts