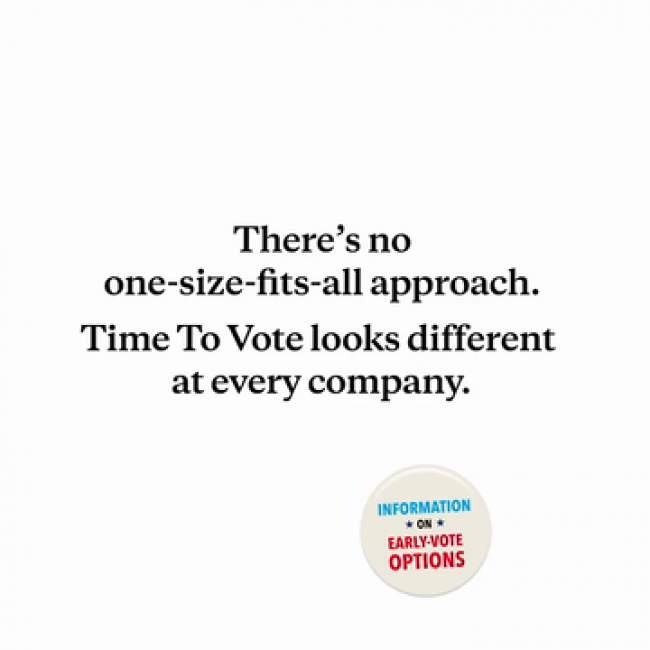 More than 700 companies have now joined Time to Vote, a business-led, nonpartisan coalition that aims to increase voter participation in the U.S. elections. Voter turnout in the U.S. is one of the lowest in the developed world and one of the most common reasons people give for not voting is that they are too busy with the demands of life and work. The coalition, which represents more than six million workers in the U.S.*, is addressing this challenge by giving employees the time and the tools they need to exercise their right to vote in the November general election.

The 2020 elections are anticipated to face many unique challenges. With the ongoing COVID-19 pandemic, the stakes for removing barriers to voting are higher than ever. Recent primaries have suffered from a lack of poll workers and malfunctioning voting machines, resulting in even longer wait times. Additionally, with the elections approaching in the midst of a global movement for racial equality, it has brought to the forefront how communities of color are disproportionately affected by systemic voter suppression and the role CEOs can play in helping to protect our democracy for all people.

"The need has never been greater for businesses to provide their employees dedicated time off to vote," said Dan Schulman, president and CEO of PayPal, one of the three companies that founded Time to Vote in 2018. "No American should have to choose between earning a paycheck and voting. Business leaders around the country must step up and do what's needed to ensure all of their employees will have the opportunity to have their voices heard this November."

So far this year, more than 700 companies – including workers in all 50 states and spanning a variety of industries – have joined Time to Vote. Over 200 companies have joined in the last two months alone, demonstrating the increased momentum of the movement as the election draws near. Major companies that have recently joined include:

"Since its inception, Time to Vote has been a powerful advocate for voter access and participation," said Jennifer Weiss-Wolf, vice president and Women & Democracy Fellow at the Brennan Center for Justice, a leading nonpartisan institute on democracy and justice in the U.S. "When so many influential business leaders join forces – and take a stand on the vital issues of civic engagement – it sends a compelling message. The Time to Vote coalition's commitment to give employees time off to vote, especially now when the challenges are so dire, can address one of the biggest barriers to voter participation."

Many Time to Vote companies have announced a variety of measures to ensure their employees are able to fully participate in the general election, such as making Election Day a paid company holiday, offering paid time off on Election Day and actively promoting initiatives such as early voting and vote-by-mail, particularly in light of the challenges presented by voting amid a global pandemic. Some member companies that have announced such commitments include:

Time to Vote is asking more companies to join the movement and commit to giving its employees the time and resources they need to vote. The goal is to have more than 1,000 companies – from a diverse set of industries representing every state – join the movement by November 3.

About Time to Vote

Time to Vote is a nonpartisan, business-led initiative to help ensure employees across America don't have to choose between voting and earning a paycheck. Participation includes giving employees access to and information about early voting or vote-by-mail options, offering paid time off on Election Day or making it a day without meetings. Time to Vote was founded by Levi Strauss & Co., Patagonia and PayPal ahead of the 2018 midterm elections, when 411 companies representing all 50 states and a variety of industries joined. For more information, visit maketimetovote.org.

*Due to age, citizenship status and other factors, not all workers are guaranteed to be eligible U.S. voters.