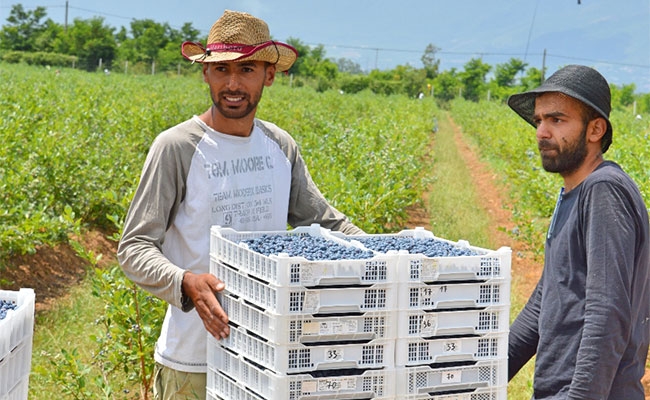 Kosovo’s agricultural sector has transformed dramatically over the last 30 years. Before the breakup of Yugoslavia in the early 1990’s, the government purchased all the agricultural production from Kosovo’s farmers regardless of quality. When this system collapsed, state-run cooperatives were abandoned and government farming systems were privatized. Smallholder farmers reverted to traditional subsistence practices, selling any surplus to a highly fragmented local market at low prices if they could sell it at all. People’s perception of agriculture as a viable economic livelihood disappeared.

When Kosovo declared independence in 2008, the agricultural sector lacked a commercial market orientation and formal aggregation systems to efficiently link buyers with producers. However, the young country showed great potential—its excellent soil, water quality, and agro-climatic conditions favored the growth of valuable fruits and vegetables. The rural population was ready to work, and youth were receptive to farming as a business. While individual land holdings averaged only 1.5 hectares, this was enough to generate a good income with high-value crops, such as raspberries or blueberries, produced using appropriate technologies, such as modern irrigation systems, and linked to effective aggregation systems.

The conditions were ripe for a transformation from subsistence farming to a commercially oriented system. Before this could happen, Kosovo had to address a series of underlying issues and change the mindset of market actors including growers, traders, processors, and the government. The agricultural sector did not inspire the confidence required for stakeholders to invest time, energy, or capital. No sensible farmer could fathom risking their family’s agricultural land, oftentimes their only productive asset, to invest in a new technology (e.g., a new seed variety or irrigation system) even with agricultural extension support, access to credit, subsidies, and grants. Farmers questioned who would buy new products, where they could be sold, and at what prices.

Within this context, the U.S. Agency for International Development (USAID) partnered with the Government of Kosovo to help kick-start the agricultural renaissance. In 2010, USAID conducted a study to identify technically and economically feasible agricultural value chains. After evaluating 100 agricultural enterprises, researchers selected the top 20 opportunities and published the findings. This data was used to inform the design of USAID’s New Opportunities for Agriculture (NOA) project. Tetra Tech was selected as the implementing partner and launched NOA in 2011 to validate the study’s assumptions and begin testing-improved production practices across targeted sectors: berries (strawberries, raspberries, and blueberries), top fruits (apples, pears, and sour cherries), table grapes, vegetables (gherkins, asparagus, peppers, and lettuce), and saffron. Later, medicinal and aromatic plants, peppers, and dairy were added to the project.

Through market analysis and stakeholder engagement, we developed a technical production and marketing framework for each target crop. We worked with farmers to create a system of commercial demonstration plots to build capacity through practical, hands-on training. At the same time, we identified and facilitated the development of aggregation systems and marketing channels which inspired confidence for private and public market actors to invest in high-potential value chains. When the NOA project ended in 2015, the production and sales of targeted crops had significantly improved. After a nearly 20-year interruption, complete value chains were reemerging, from production through final sale.

Building upon NOA’s success, USAID designed the Agricultural Growth and Rural Opportunities (AGRO) Activity to focus on full commercial development of high-potential value chains. Tetra Tech was selected again to lead this effort and leverage lessons learned from NOA to accelerate rural economic growth in Kosovo. Specifically, the AGRO team prioritized crops based on their ability to:

As the AGRO team faced skepticism from many smallholder farmers, it was critical to quickly demonstrate the commercial viability of targeted value chains.

In a pivot from NOA’s direct implementation approach, we emphasized working through existing market actors and strategic partners, such as lead farmers or aggregators, to conduct field demonstrations or trainings. From the start of the Activity, farmers engaged with strategic partners as service providers, rather than AGRO staff. While some farmers were disappointed that we did not provide the direct production support that they were accustomed to receiving, perspectives changed when buyers started guaranteeing future contracts. Not since the Yugoslav government-run system were smallholders offered technical advice and the purchase of harvested crops at agreed-upon prices. Witnessing the success of their neighbors, other farmers and businesses began crowding into such contracted arrangements.

In parallel, we mentored buyers and other strategic partners who were already purchasing through spot transactions on the local market. Through our facilitation, buyers began to program production with farmers, offering pre-season contracts which bundled inputs and services in partnership with agricultural input suppliers. Through AGRO’s Innovation Incentive Fund, we developed strategic partners’ capacity to serve as sustainable buyers through matching grants which reduced the risk of capital expenses for innovative technologies and approaches. Funding expanded capacity to receive, grade, store, and pack increasing volumes of product.

Avni Shabani, a farmer from Peran in northern Kosovo, had been collecting and freezing wild mushrooms for the export market. However, climate change decreased the reliability of his harvest and reduced the viability of his business. While Avni knew how to produce and freeze raspberries, he could not produce sufficient volumes to interest European buyers, who demanded hundreds or thousands of tons of product. Through conversations with the AGRO team, Avni changed his position in the value chain from mushroom collector and processor to a raspberry aggregator. The AGRO team connected Avni with potential farmers in the area while supporting new producers with up to 50 percent of start-up capital costs.

Using Tetra Tech’s proven contracting mechanism, Avni developed a network of growers which could produce the volumes required by foreign buyers. Simultaneously, he engaged with project experts to deliver technical advice through demonstrations with nearby smallholders. Within two years, Avni was aggregating 1,600 metric tons of raspberries for the frozen market from 450 small-scale growers throughout the municipality. Avni’s business created more than 300 new jobs, spurring the confidence for others to crowd into the raspberry value chain.

Today, there are 14 commercial-scale raspberry aggregators in Kosovo, collecting up to 10,000 metric tons of raspberries annually from smallholder farmers, sustaining more than 2,000 full-time jobs, and generating annual export sales of more than $10 million.

With fully formed value chains and commercial success, once-skeptical farmers and outsiders increased their investments in the agricultural sector. Outside of Kosovo, foreign buyers took notice as Kosovo started to emerge as a reliable supplier of high-quality product in competitive markets such as the Netherlands and Germany. As with Avni's story, aggregation centers sprouted up to buy production from hundreds of smallholder farmers for raspberries, strawberries, gherkins, peppers, and medicinal and aromatic plants. We introduced the International Organization for Standardization, Global Good Agricultural Practice, and other international food safety standards which guarantee quality and food safety to both farmers and traders, enabling the export of nearly $73 million in agricultural products to the European Union, the Middle East, and the United States. Through major international trade fair participation, firms leveraged exciting new market linkages. A virtuous cycle of confidence was firmly established in the agricultural sector which propelled itself well beyond the life of the AGRO Activity.

Entering AGRO’s final year, we recognize that the collective mindset change has reached Kosovo’s youth and diaspora investors and continues spreading elsewhere. The next level of transformation will be driven by committed industry leaders within Kosovo. National associations representing growers in all value chains are starting to offer valuable member services. For the first time, the national berry association, Mjedra e Kosoves, and others are bringing competitors and government entities together to mutually solve problems. With USAID support, aggregators and small-scale producers are on a path towards self-reliance and prosperity. Our facilitation of market actors towards sustainable agricultural growth in Kosovo built confidence across value chains, driven by harvests of high-quality product, and secured by market contracts. The stage is now set for the next phase of agricultural transformation in Kosovo.