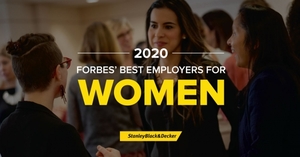 In addition, Stanley Black & Decker recently received accolades from Comparably, a top career website, which named the company to its lists of Best CEOs for Diversity and for Women, Best Leadership Teams and Best Companies for Professional Development.

“In addition to simply being the right thing to do, research has consistenly demonstrated that companies with diverse and inclusive cultures perform better,” said Stanley Black & Decker President and CEO Jim Loree. “The value of bringing in a range of perspectives into decision making is core to our high-performing, innovative and purpose-driven culture and we have seen the benefits of this first hand during the global pandemic. We know there is still much work to be done and we are for those who demand justice, take a stand for equality and commit to inclusivity for all.”

Stanley Black & Decker has taken a number of steps to advance its diversity and inclusion efforts, including supporting nine employee resource groups (including a Women’s Network), joining the Paradigm for Parity Coalition to address the gender gap in corporate leadership and signing on to the CEO Action for Diversity & Inclusion. The company has also participated in the Business Roundtable Diversity & Inclusion Index, where the largest U.S.-based employers are committed to building a more inclusive environment. This spring, the company also supported the UN Foundation’s celebration of International Women’s Day with their #EqualEverywhere campaign.