New handheld tool ideal for disinfecting sensitive switches and touch screen displays. United consulted partners at Cleveland Clinic regarding the use of UVC lighting in its operation. 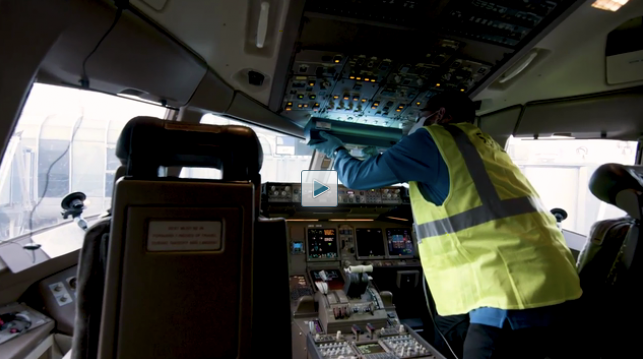 United Airlines is now cleaning pilot flight decks with Ultraviolet C (UVC) lighting technology on most aircraft at its hub airports to disinfect the flight deck interior and continue providing pilots with a sanitary work environment. The airline is using handheld, AUVCo blades from the American Ultraviolet company to kill any viruses that may reside on sensitive switches and touch screen displays within the flight deck.

United has tested a variety of uses for UVC lighting as a disinfectant and consulted with its United CleanPlus partners at the Cleveland Clinic to determine that the flight deck was the most effective use of the technology.

"Safety is our highest priority and we continue to research, test and roll out new technologies to keep our aircraft and terminals safe for both customers and crew," said Bryan Quigley, United's senior vice president of flight operations. "Flight decks have many working parts, screens and components that are challenging to clean with traditional hand wipes and liquids, especially for someone who isn't a pilot. The UVC lighting gives us a faster, more effective disinfection of one of the most important areas of the aircraft."

United currently uses electrostatic spraying to disinfect its aircraft cabins, one of the most effective techniques to clean around harder to reach surfaces, particularly overhead bins and spaces within tray tables. United's use of UVC lighting in the flight deck – along with electrostatic spraying in the cabin – further reflects the airline's approach of matching the right type of technology to the right settings.

This latest enhancement of using UVC lighting technology is another way United is working with its partners at the Cleveland Clinic to guide its policies and procedures on safety and cleanliness.

"United implementing UVC lighting in its flight decks is an important tactic because we know that the virus can be killed by ultraviolet light," said Dr. James Merlino, Chief Clinical Transformation Officer at Cleveland Clinic. "It's one more measure that we can implement to ensure that we're doing all we can to keep passengers, flight attendants and crews safer."

United is focused on delivering a new level of cleanliness on the ground and in the air. In addition to the initiatives mentioned above, several of the airline's precautionary measures to further ensure a cleaner environment include: