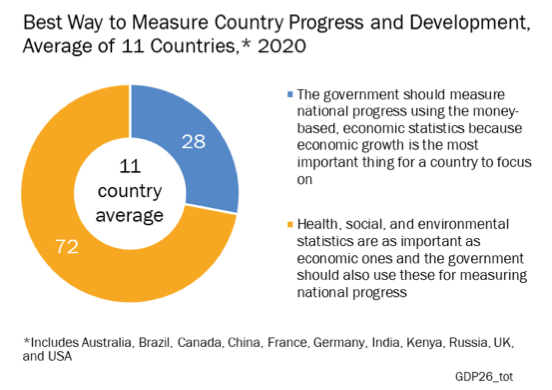 The 2020 GlobeScan-Ethical Markets “Beyond GDP” survey repeats questions asked in 2007, 2009, and 2013 polls in Australia, Brazil, Canada, China, France, Germany, India, Kenya, Russia, the UK, and the USA.  The general public (n=1,000 in each country) were again asked to choose between continuing money-based GDP to steer national progress or to add statistics on health, education, and the environment. Overall, an average of 72 percent prefer broadening GDP with such additional data. 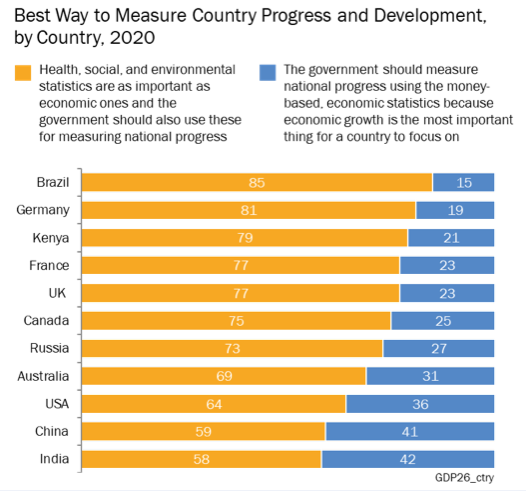 These GlobeScan-Ethical Markets surveys were launched at the European Parliament at the EU Commission’s “Beyond GDP” conference in 2007 by Ethical Markets’ CEO Dr. Hazel Henderson, a US cabinet-level science policy advisor (www.beyond-gdp.eu), and reconfirmed in the later polls. Henderson said “Yet financial markets, media, most governments and companies, and their economists persist in ‘the GDP fetishism’ described by economist Joseph Stiglitz. The 2020 survey shows that people are still ahead of economists, financiers, corporations, governments, and politicians.”

Today, many seem to prefer the United Nations Sustainable Development Goals (SDGs), the Human Development Index (HDI), and the Gross National Happiness Index (GNH) developed in the nation of Bhutan (not included in the survey). Governments, city mayors, and many companies are now scrambling to catch up, as in the “C40 Mayors’ Agenda for a Green and Just Recovery,” July 2020, and the World Economic Forum’s New Nature Economy, Report II “The Future of Nature and Business,” June 2020, which forecasts $10.1 trillion of new business opportunities in valuable natural productivity.

These opportunities are also cited in the cumulative $10.3 trillion of private investments in green sectors worldwide, tracked in Ethical Markets’ Green Transition Scoreboard® reports from 2009–2020 (www.ethicalmarkets.com).  In Brazil for example, dependent on nature’s productivity, the 2020 survey finds 85 percent of Brazilians favor the broader measures added to GDP on health, education, and environment, along with 81 percent of Germans, 79 percent of Kenyans, 77 percent of French and British publics, 75 percent of Canadians, 73 percent of Russians, 69 percent of Australians, 64 percent in the USA, 59 percent of Chinese, and 58 percent of Indians. The average of those in these countries still favoring money-based GDP fell to 28 percent.

The global pandemic continues to upend societies, cratering GDP-led economic growth, and deepening inequality. Chris Coulter, CEO of GlobeScan, said “There will clearly be significant societal implications on the back end of the pandemic, leading to further examination around how to best measure and value economies across the world. People want a more holistic approach to how we measure progress in our countries.”

This may well also account for the rising of the bottom-up SDG scorecard’s popularity, cited in both the above-mentioned C40 and World Economic Forum reports. The SDGs were officially adopted by 193 member countries of the UN in 2015 and represent traditional systemic reliance on nature for survival in all countries, as well as the older human values of community cooperation encoded in the Golden Rule.

Ethical Markets Media Certified B Corporation, a signatory of PRI and works to reform markets and metrics while helping accelerate and track the transition to the green economy with its Green Transition Scoreboard®, Transforming Finance TV Series, research, reports, articles, newsletters, and analysis by Hazel Henderson, editor-in-chief, on EthicalMarkets.com.

GlobeScan is an insights and strategy consultancy, focused on helping our clients build long-term trusting relationships with their stakeholders. Offering a suite of specialist research and advisory services, we partner with business, NGOs and governmental organizations to meet strategic objectives across reputation, sustainability and purpose. Established in 1987, GlobeScan has offices in Cape Town, Hong Kong, London, Paris, San Francisco, São Paulo and Toronto, is a participant of the UN Global Compact and a Certified B Corporation.