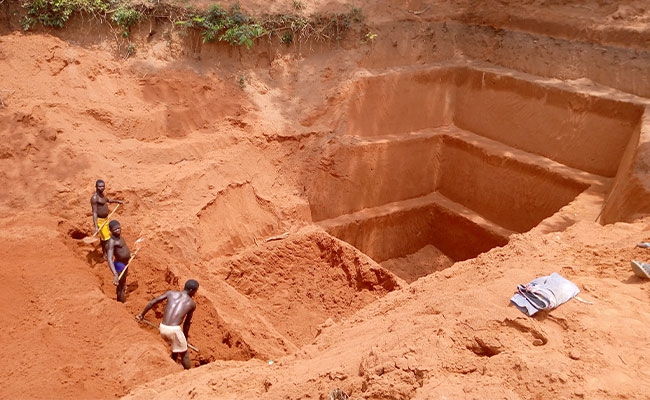 “Look at how we work,” said Sylvain, an artisanal diamond miner in Sama near Carnot in the Central African Republic (CAR). “If the coronavirus comes to this site then we’re all going to get it.”

That concern is shared by CAR authorities and its partners, including USAID, as the country responds to the worldwide COVID-19 pandemic. While the virus has been slow to take hold in CAR, cases have gone from less than a dozen to more than 700 in just a few weeks, according to May 2020 figures from the Health Ministry (in French).

Artisanal and small-scale mining (ASM) communities are particularly vulnerable given close proximity of diggers at work, extreme poverty, lack of access to health care, and limited understanding of the virus. Additionally, ASM communities are suffering financially since they depend on fluid international trade in order to sell their minerals and receive financing.

From May 6 to 14, 2020, RJDH and the Mining Ministry organized a series of radio roundtables (in French) with local health and mining officials, passing along key messages on hand washing and social distancing.

“We’re worried that artisanal miners have not yet fully understood the threat of this disease,” said Dr. Patrick Ouango, a regional health official in Berberati, CAR. “Local radio is essential to reach them.”

The experts also exhorted miners and traders to play their part in combatting mineral smuggling to neighboring Cameroon, which USAID AMPR-funded research found was the primary transit hub for illegal diamonds (in French) and gold.

The fear is that smuggling could seed infections in western CAR where health facilities are few and far between. Indeed, with the Bangui M'Poko International Airport closed since March 27, the land border with Cameroon—a vital economic lifeline to land-locked CAR—has been the main source of new infections.

The economic fallout in mining communities due to COVID-19 is of equal concern. Up to a quarter of CAR’s impoverished population depends on mining, and with the global disruption to the gold and diamond supply chains, local prices have dropped 30 percent and the legal chain of custody is paralyzed.

Meanwhile food prices have increased 25 to 30 percent compared to the same period in 2019. In this context, mining will not only continue, but may increase as newly unemployed people turn to digging in order to survive, despite unfair prices and predatory behavior by smugglers.

Prior to COVID-19, the diamond sector was showing signs of recovery after years of challenges due to smuggling and armed group involvement in the minerals trade and subsequent trade restrictions put in place by the Kimberley Process. The gold sector also has been looking up, with legal exports having increased 350 percent since 2016.

The government and its partners are worried that the crisis could undo progress and play into the hands of illegal actors and armed groups, which are increasingly active in mining areas. There also has been renewed violence from armed groups in Ndélé, CAR, another diamond-rich area.

“There is a risk that fraud and smuggling will increase due to COVID-19,” said Mining Minister Leopold Mboli Fatran at a April 17 press conference (in French) on COVID-19 and the mining sector. “I therefore invite mining sector actors to avoid bringing the disease into our country through illegal transactions in neighboring countries.”

USAID AMPR and EU GODICA are supporting the Kimberley Process national and local committees in charge of monitoring diamond mining zones to begin reporting on the COVID-19 situation at mining sites. The committees have helped the Mining Ministry produce brochures on COVID-19 prevention targeting mining stakeholders.

For Maxie Muwonge, the USAID AMPR chief of party coordinating the project’s response, the support to the government and communities is a vital part of the project’s mission.

“We aim at supporting good governance and development in mining communities,” said Maxie from his Bangui office, where they have been without electricity since early March. “COVID-19 is a threat we have to adapt to, but also an opportunity to step up our actions.”

For example, USAID AMPR reached out to women’s associations trained in soap-making by predecessor USAID project, Property Rights and Artisanal Diamond Development (2007-2013). Several were still making and selling soap nearly seven years since the end of the previous project.

As part of its portfolio of activities supporting women’s livelihoods in mining communities, USAID AMPR is funding one of the ongoing soap-making groups to train new associations. The aim is to increase the local supply of soap to help fight the virus while also enabling women’s groups to seize a new market opportunity during a precarious time.

While it remains to be seen how the crisis will play out in CAR with upcoming presidential elections and risks of instability, the mobilization of mining sector actors gives hope that men and women in the country’s mining communities will once again demonstrate their resilience.