As the European Commission grants Marketing Authorization for the company's Ebola vaccine regimen-a key step towards enabling broader access to it for the people who need it most-we share top facts about the vaccine for the deadly virus. 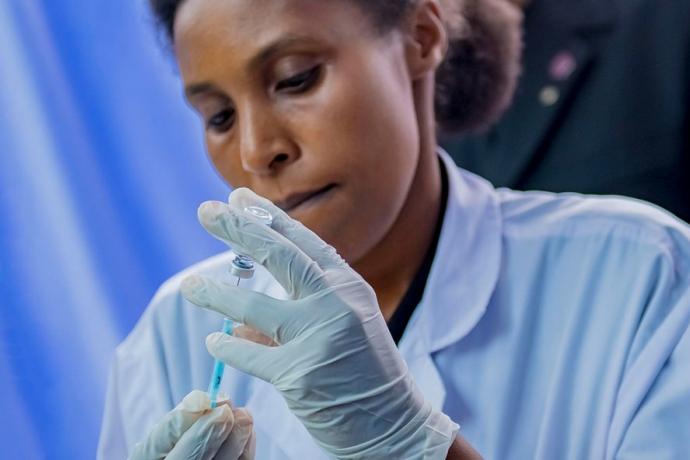 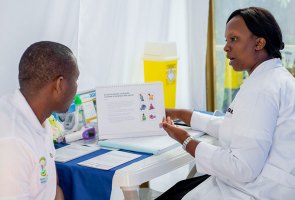 One of the world's deadliest viral diseases was discovered in 1976 in Zaire, now known as the Democratic Republic of the Congo (DRC), near the Ebola River.

Since then, there have been 30 outbreaks of Ebola Virus Disease (EVD)—the worst of which hit in West Africa in 2014. During that two-year epidemic, more than 11,000 people died in Guinea, Liberia and Sierra Leone. Two in five individuals who were infected with the disease, then lost their lives.

In the meantime, Johnson & Johnson had already begun working on a potential vaccine for filoviruses—a family of viruses that includes Ebola. In the wake of the 2014 outbreak, the company accelerated those efforts with a focus on Ebola, and continued that work even when the crisis in West Africa had passed.

So when Ebola hit the DRC again in 2018—in what is now known as the second worst outbreak of the disease in history—Johnson & Johnson was prepared to help.

And today, the Janssen Pharmaceutical Companies of Johnson & Johnson have received the first approval of the Ebola vaccine regimen: Marketing Authorization from the European Commission, which is the executive arm of the European Union.

While the 2018 outbreak was declared over on June 25 of this year, a new outbreak surfaced in another part of the DRC on June 1, underscoring the ongoing need for prevention tools.

In light of this approval, we've rounded up the latest facts about Janssen's Ebola vaccine regimen, including lessons learned from its development that could help in the fight against COVID-19.

Spurred on by the West African Ebola epidemic in 2014, Johnson & Johnson committed to accelerating development and expanding production of a lead two-dose vaccine regimen, combining a Janssen vaccine as the first dose and contracting the second dose of the regimen from Bavarian Nordic A/S.

The company launched multiple clinical trials across the United States, Europe and Africa for the investigational Ebola vaccine regimen in collaboration with global research consortia supported by Europe’s Innovative Medicines Initiative, which is funded through the EU's Horizon 2020 program, as well as other global partners.

It also established partnerships with the U.S. Biomedical Advanced Research and Development Authority (BARDA) to speed the development and manufacture of the vaccine regimen.

2. The first dose of the Ebola vaccine regimen uses the same technology as the investigational SARS-CoV-2 vaccine candidate the company is researching for the novel coronavirus

Each technology uses a different type of virus that has been modified so it can safely replicate in humans and safely carry the genetic code for one or more proteins from a second, target virus—in this case, the Ebola virus.

The proteins produced by the genetic code trigger an immune response against the Ebola virus without actually causing the disease itself. And because the carrier viruses are modified, they don't cause illness either.

3. In response to the Ebola outbreak in the DRC, Johnson & Johnson committed to donating up to 700,000 doses of its vaccine to people at risk in the DRC and the Republic of Rwanda

Ebola emerged again in the DRC in 2018, ultimately leading to more than 3,000 confirmed cases and more than 2,000 deaths.

In the wake of the outbreak, Johnson & Johnson announced in 2019 that it would provide up to 500,000 vaccine regimens for a new clinical study to make the vaccine available to individuals at some risk of Ebola infection who live in areas close to the outbreak zone, with the goal of helping prevent further geographic spread of the disease.

The study was implemented by the DRC's Ministry of Health and National Institute of Biomedical Research and supported by global health organizations, including Médecins Sans Frontières, Epicentre and the London School of Hygiene & Tropical Medicine.

That decision was followed later in the year by a commitment to provide up to 200,000 vaccine regimens to the neighboring Republic of Rwanda to help stop the outbreak from crossing the DRC border.

4. Approximately 60,000 people have been vaccinated with the first dose of Janssen's Ebola vaccine regimen to date

The nearly 60,000 people who've begun the preventive Ebola vaccine regimen did so as part of clinical studies and vaccination initiatives.

Data which have been published in prestigious peer-reviewed journals such as JAMA suggest that the vaccine regimen is well-tolerated and induces robust and durable immune responses against the same strain of the Ebola virus that was responsible for the West African and DRC outbreaks.

5. A newly announced European authorization is a major milestone for this Ebola vaccine

Janssen is now collaborating with the World Health Organization on vaccine pre-qualification, which, if granted, will help facilitate broader access and accelerate registration of its Ebola vaccine regimen in African countries to help those most in need.

“The approval of Janssen’s Ebola vaccine regimen in the EU is a landmark moment for this company," says Paul Stoffels, M.D., Vice Chairman of the Executive Committee and Chief Scientific Officer, Johnson & Johnson. “The approval symbolizes the progress we have made as a company towards achieving our vision of delivering vaccines to communities most at risk of deadly infectious diseases, such as Ebola. Building on our history of redefining treatment paradigms, we are committed to bringing forward vaccines to help overcome the threat of some of the world’s most life-threatening infectious diseases.”