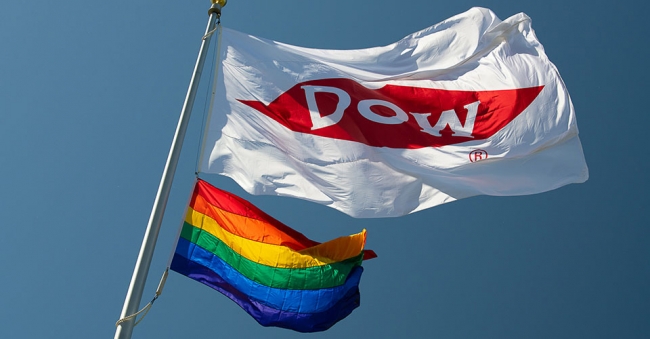 This year, Dow is celebrating the 20th anniversary of our LGBTQ+ and ally employee resource group, GLAD. It’s an important milestone. It reminds us of the incredible progress we’ve made and the work we still have yet to do.

It’s also my first full year as GLAD’s executive sponsor, a role I’m humbled to take on. This role of sponsor, as well as my responsibilities as an ally, I take very seriously. As our Chairman and CEO, Jim Fitterling, wrote over the weekend on this blog: “As a member of the LGBTQ+ community, there is no question that allies have been critical to the advancements we’ve made in terms of equality in recent history.”

I recognize that allies will be critical in creating a more inclusive and equal world going forward – not just for the LGBTQ+ community but for all those who face inequities and injustice daily.

I’m ready to take action … to honor our last 20 years of progress and build on that progress over the next 20.

When GLAD began, the group was actually very similar to today – passionate, inclusion-minded employees affecting change to better our company and the world. In 1999, then-CEO Bill Stavropoulos received an email from a concerned employee asking why sexual orientation was not included in our anti-discrimination policy.

The unsigned note concluded: “I hope that someday I will be brave enough to sign a letter like this with my name. I also hope that in one, two or five years I will have seen enough progress that I will still want to give my very best to remain with Dow.”

Progress didn’t even take a year and a considerable amount was accomplished in the next five years. Sexual orientation was added to Dow’s non-discrimination policy before year end; this courageous act helped spur the creation of GLAD the following year.

Over the next 20 years the progress continued. It started first with ensuring an inclusive workplace for LGBTQ+ employees: extending employee benefits to same-sex partners, adding gender identity to our non-discrimination policy, and becoming the first chemical company to score 100% on the Human Rights Campaign Corporate Equality Index.

Then, after working diligently to provide the most inclusive workplace policies and practices possible, Dow and GLAD began working to ensure the communities where our employees work and live offered people the same equal protections.

Today, if you send a letter to Dow’s CEO, it will still find itself on the desk of a forward-thinking, inclusion-minded CEO; one who personally understands the importance of inclusion and has helped further our progress, making it a key part of our ambition.

In 2019, four Dow leaders earned recognition on two 2019 OUTstanding lists – LGBT+ Executives and LGBT+ Future Leaders. Two of these individuals ranked in the top 10 for their respective categories. Earlier this year, Dow earned its 15th consecutive 100% score on the Human Rights Campaign’s Corporate Equality Index. And, as of our last count, GLAD has nearly 5,000 participants and almost 60 chapters worldwide. Much of this participant growth has come from allies.

The progress has been deeply personal as well; as he noted in a recent email, the author of the unsigned note, Todd Forrester agrees: “GLAD and Dow’s overall support made a huge difference in my life. I grew comfortable bringing my whole self to work. I could finally share my family and personal life within my work life. Most significantly, I became a father to four beautiful children and that probably would never have happened if I had not overcome the divided life I used to live. For that – and hearkening back to my letter – I am still so proud at Dow!”

However, despite this progress, we still have work to do.

Around the world, the LGBTQ+ community still faces discrimination every day. In the United States, there is still no comprehensive federal framework ensuring LGBTQ+ non-discrimination, meaning colleagues in numerous states – including Michigan, where Dow is headquartered – can be legally fired based solely on their sexual orientation or gender identity. Other countries still have laws in place that call for the imprisonment or death of the LGBTQ+ community simply for being who they are. And this doesn’t include the added inequities experienced by members of the LGBTQ+ community due to their race, ethnicity or other minority group status.

And, even though so many Dow employees, partners and community members already recognize the importance of creating an inclusive workplace, there are numerous opportunities for us active allies to further educate everyone – turning them from allies to advocates.

While all of us are dealing with a lot right now – from a global pandemic to historic flooding to economic hardships to witnessing countless acts of racism and injustice – and even though we can’t yet physically celebrate together, we still should try to dedicate some time this month to safely take action, celebrating where we’ve been and where we’re going.

I encourage everyone to join a virtual Pride celebration. Many of our partners are hosting them, including: Out Leadership, Out & Equal Workplace Advocates (O&E), PFLAG National, Victory Institute, Workplace Pride and GLAAD, amongst others.

There’s work to do, but we can use this 20-year celebration and Pride Month to continue to make progress. If the last 20 years is any indication, I know we'll find a way to deliver.