A Commitment to Food Security

A Commitment to Food Security 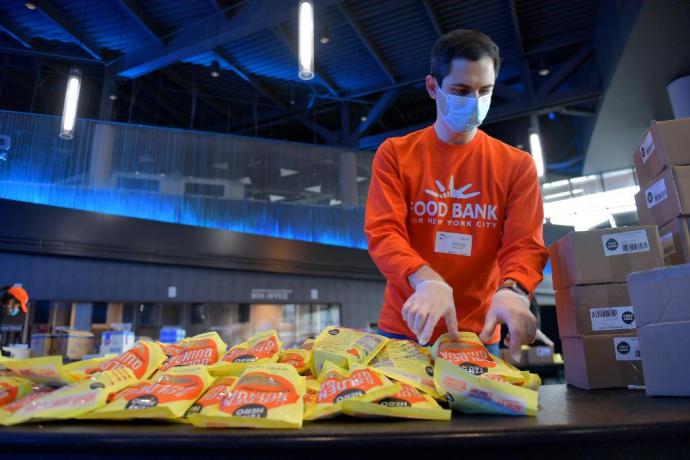 Foodbanks are experiencing significant challenges as the impacts of COVID increase.

It was early March, right around the time the COVID-19 pandemic started spreading in the United States, but Radha Muthiah already knew the situation was serious.

Muthiah, the CEO of the Capital Area Food Bank in Washington, D.C., had seen calls to their hunger hotline triple. Web traffic was up dramatically on its "get help" page. But strangest of all were the walk-ins: people just showed up asking for groceries.

In ordinary times, the food bank works like a wholesaler, where organizations like pantries and soup kitchens pick up food in bulk and deliver it to the people they serve, including children, families, seniors, and veterans. But when staff started seeing walk-ins – including people who had once worked there as volunteers – Muthiah realized these were no longer ordinary times.

“This is unprecedented for sure,” she said. “Have there been other emergencies and disasters? For sure. The key difference here is, everyone is being affected at the same time.”

Food banks across the United States are facing a multitude of problems as they try to keep people fed during the pandemic: Double-digit unemployment means demand for food assistance is up. The closure of restaurants means people need more groceries at home, meaning grocers are selling the food they would typically donate. That is forcing food banks to buy far more of their supply – something they expect they’ll have to do for quite some time.

To help shoulder the cost, Raytheon Technologies is giving $5 million to Feeding America®, a domestic hunger-relief organization that supports food banks and food-security initiatives across the United States. Food banks in 15 regions will receive donations this week to address the increased need for food assistance locally. The initiative is part of Raytheon Technologies’ broader response to the COVID-19 pandemic. The company is using its manufacturing capacity, engineering, logistics and finance expertise, to carry out initiatives that serve our communities, deliver on our commitments to our customers and protect our employees.

Raytheon Technologies is also matching employees’ individual donations to Feeding America as well as other nonprofit organizations, including the Global Foodbanking Network, which serves over 40 countries.

“The most important thing I think we can do for our communities, aside from staying indoors and staying home, is to help on the food side,” CEO Greg Hayes said in a message to employees. “I can tell you, we can help and we will help, by donating money directly to Feeding America.”

The regions were chosen in collaboration with Feeding America based on several factors including their pre-pandemic rates of food insecurity, the local effects of the pandemic, and the presence of Raytheon Technologies or its four businesses in those communities.

The food banks receiving aid include:

In San Diego, where the cost of living is high and tourism is a cornerstone of the economy, demand for food assistance has skyrocketed, said Vince Hall, CEO of Feeding San Diego. He said his organization’s overall demand has been up about 50 percent, but that some of its distribution sites have been distributing three or four times the amount of groceries they normally would.

In early April, the organization held a distribution event at SDCCU Stadium — formerly home to the San Diego Chargers — and drone footage showed more than 1,000 cars lining up.

What’s also changed are the types of food people are looking for at their farmers’ market-style distribution centers. Ordinarily, they’d take home some fresh produce to go along with the proteins they’d bought at the store. But now they’re looking for those proteins, too.

“Now, people are confronted with being flat broke,” he said. “In less than two months, they’ve been thrown into a situation where they don’t have any money.”

While people looking to help might want to donate food directly, Hall said his organization, with its focus on “rescued food,” or produce that would otherwise go to waste, can make money go even farther.

“If we put a barrel in front of a grocery store, we would get a can of soup,” he said. “If you gave us the dollar instead of a can of soup, we can turn that into four meals for a family in need.”