The People Behind Today’s Responsible Brands: Teresa Coles Talks With John Lanier of the Ray C. Anderson Foundation on How One Man’s Conscience Upended an Industry

The People Behind Today’s Responsible Brands: Teresa Coles Talks With John Lanier of the Ray C. Anderson Foundation on How One Man’s Conscience Upended an Industry 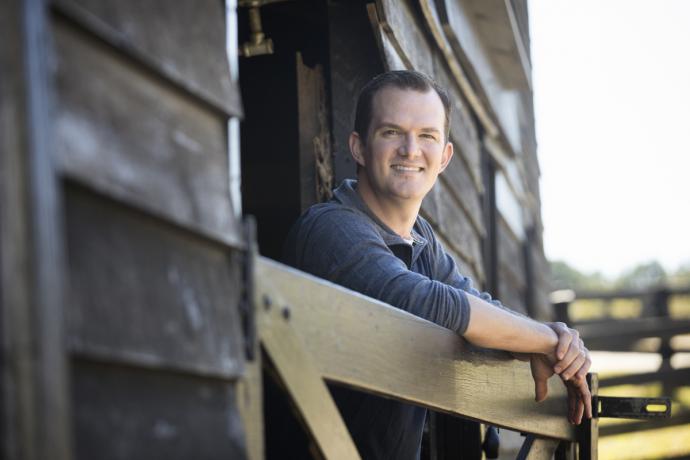 The environmental climate in the 1990s? A New York Times article summed it up this way: “…midway through, the decade is shaping up as a period of turmoil for the environmental movement. Membership and budgets have dropped for most of the national groups. A well-organized countermovement of landowners, city officials and industrial executives steamed into Washington and halted Congressional work this year on strengthening environmental laws. They argued that environmentalists were exaggerating and using inconclusive data to frighten people and influence lawmakers.”

A sobering reflection, indeed. Yet at the same time, a Georgia-born industrialist was experiencing an epiphany that would change his position from a self-proclaimed “plunderer of the earth” to a global champion of corporate sustainability. It’s the story of Ray Anderson, who in 1973 founded Interface, a carpet manufacturer known for its innovation in commercial tile flooring. Most importantly, he led the company through a soulful redesign beginning in 1994 that transformed its traditional manufacturing operations into a sustainable industrial enterprise with zero negative impact on the environment. Today, Interface is a $1.3 billion corporation that has fulfilled its Mission Zero® commitment, becoming the first global flooring manufacturer to sell all products as carbon neutral across their full life cycle.

Ray Anderson died in 2011, but his commitment to connecting business to the natural world continues through the work of the foundation formed in his honor. I had the privilege of talking with his grandson, John Lanier, executive director of the Ray C. Anderson Foundation, about the work of this environmental pioneer and his vision of a future where business and industry heal the earth rather than harm it.

Teresa Coles, Riggs Partners: Your grandfather described what he called a “spear in the chest” moment in 1994 that woke him up to environmental issues and caused him to lead Interface through a complete systems redesign. What led up to this?

John Lanier, Ray C. Anderson Foundation: The company was starting to get questions from customers about what Interface was doing to help the environment. They formed a task force to start delving into this, and Ray was asked to give a speech to lay out his environmental vision for Interface at a kick-off event. In preparing for the speech, he picked up a book called The Ecology of Commerce by Paul Hawken. He read it in one night, had a personal epiphany, and took Hawken’s challenge of corporate environmental responsibility directly into the task force event. Right then and there, he set the vision for Interface to become not only a sustainable, but eventually regenerative company — one that returns more resources to the earth than it takes out.

TC: What was it about the book that stood out to him?

JL: A concept around biodiversity loss that Hawken referred to as the “the death of birth” was the game changer for Ray. It’s tied to an ecological phenomenon called overshoot and collapse, which happens to every species when it overshoots the carrying capacity of its ecosystem. Ray realized just how applicable it was to all of humanity, and he began to have an appreciation for the degree to which humans were overshooting their carrying capacity through the extraction of excessive amounts of materials from the earth.

TC: How was Ray able to get other leaders of the company on board with his sweeping vision, especially at a time when there was very little environmental awareness in manufacturing?

JL: As CEO and majority shareholder of the business, Ray had the ability to set a bold vision and the wherewithal to make certain things happen. But he knew to achieve real change, he had to explain WHY he believed so strongly in transforming Interface into an organization that did no harm to the environment. So he very patiently began sharing his idea and instructing his leadership team to gather the resources necessary to make this change. He did this with the authenticity and charisma that was unique to him. When he spoke, people listened.

THE CLIMB TO SUSTAINABILITY

TC: Ray challenged the people of Interface to make it the first industrial company in the world to attain environmental sustainability, then to become regenerative. What did this mean to him and why was it important to set such a high standard?

JL: Ray had a real understanding of sustainability, as few people do even today. He knew being a sustainable company means having the systems in place to do no harm, at all. It’s not about being “less bad;” it’s about not taking anything away from future generations to meet a company’s needs. Ray knew it was not enough to mitigate damage to the environment; we have to leave things better than we found them.

TC: Ray noted Interface’s efforts were successful because it was a wholesale systems approach, rather than a series of tactical one-offs. How did Interface incorporate the cyclical premise of nature into a new manufacturing system with sustainability at its core?

The Interface team was highly influenced by biomimicry. It’s a practice that asks, “how would nature do or solve X?”, and it has been very important to building sustainable processes. Another element of biomimicry is understanding we are not separate from nature. So, we need to ask ourselves how we as humans can co-exist with nature in a way that doesn’t violate its laws. Ray understood this, and it was fundamental to the systems evolution of Interface.

TC: How has Interface taught other people how to achieve this kind of sustainability?

JL: The people at Interface have advised many manufacturers who have reached out over time. As you might expect, they’ve had significant influence on companies in its supplier chain. They’ve also helped companies from other sectors learn from Interface’s processes by offering tours of the mills, letting people see all the things Interface is doing from a sustainability standpoint.

TC: The work of the foundation your family created in honor of Ray supports a wide array of environmental initiatives. What are some of your current projects?

JL: While we provide a number of small grants to various organizations, we focus on four initiatives we believe can help achieve long-term impact. First is the Ray C. Anderson Center for Sustainable Business at Georgia Tech, where students learn about the connection of business and the natural world. We also support the Biomimicry Institute through its Biomimicry Global Design Challenge. Then there’s The RAY, an 18-mile stretch of I-85 named in Ray’s honor that serves as a living laboratory for the interstate of the future. And finally, Georgia Draw-Down, an organization that focuses on helping our state toward a path of carbon neutrality.

THE URGENCY OF NOW

TC: What do you think Ray would say to business leaders today, given what we know about rising environmental concerns?

JL: I believe he would say we’ve made real progress, but there is much work to be done because the scope of the challenges we face are so much more daunting than when he set out on his journey. It requires we question everything about what got us into this mess to begin with, and we have to come to grips with some very difficult questions. For example, can the economy really continue to expand year after year in its current state and attempt to resolve climate change? Ultimately, I think Ray would say we need to ask ourselves some very difficult questions about redesigning commerce itself.

TC: There’s a major issue in our current economic trajectory as a viable scenario in which we can address climate change. Clearly, something has to take priority.

JL: Well said. Ray viewed sustainability as a moral imperative. He put that ahead of everything else and questioned every aspect of the business in order to align it with the needs of our planet. That’s the kind of vision it will take for all of us.

Riggs Partners is a creative marketing consultancy that specializes in building Responsible Brands. We help visionary clients build these high-performance brands by aligning a powerful trifecta of organizational culture, business strategy and brand marketing. The company is also the founder of CreateAthon, a national pro bono marketing marathon that has delivered more than $25 million in skills-based volunteerism to the nonprofit sector. To learn more about how we build Responsible Brands, visit www.riggspartners.com