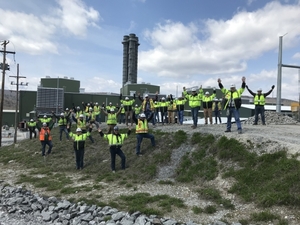 RESTON, Va., Apr. 24 /CSRwire/ - One million additional homes in New York state will receive low-carbon, affordable, safe and reliable power from the newly completed Cricket Valley Energy Center, which was built by Bechtel. The 1,100-megawatt (MW) combined-cycle plant in Dover, New York, will use advanced emissions-control technology to ensure it operates as one of the most efficient power-generation facilities in the U.S.

“Every day, on every project, Bechtel has brought their A game, partnering with us and continuously striving to build better, faster, and safer as we strive to advance a sustainable energy future. Today, that attitude has brought power to one-million more homes in New York state,” said Tom Spang, Chief Executive Officer of Advanced Power, which is the developer and asset manager of the Cricket Valley Energy Center.

The needs of the community were prioritized in the design and construction of the facility, which was built to minimize the visual and noise impacts to surrounding residents. In addition, the project has significantly contributed to the local economy by awarding more than $400 million in engineering, procurement, and construction (EPC) contracts to local businesses and spending an additional $8 million with 147 local suppliers.

At the peak of construction, the project employed more than 1,100 people, the majority of whom were hired locally. The completed plant will support 25 permanent jobs.

The project team supported local charities and employees volunteered at or donated to Habitat for Humanity, the Dover Plains Center of Compassion, and Dover High School. Most recently, in response to the coronavirus pandemic, the team donated N95 masks to MidHudson Regional Hospital in Poughkeepsie, New York.

“The Cricket Valley Energy Center is a significant advancement in the goal of delivering more reliable low-carbon energy to New Yorkers. We are proud to support Advanced Power as a valued partner in moving the industry toward more environmentally safe technologies. There is no silver bullet to achieving net zero, but we continue working with our customers to help the industry move faster in that direction,” said Joe Collins, Bechtel’s project manager at Cricket Valley.

Bechtel has been a leader in the power industry for more than 60 years and has designed and built numerous natural gas-fired combined cycle projects in the United States, including facilities in Ohio, Pennsylvania, Virginia, and Texas. Cricket Valley is the second combined-cycle power plant that Bechtel has undertaken for Advanced Power. Construction of the first plant, the Carroll County Energy Facility was completed in 2017.

Advanced Power is a privately-owned company established in 2000 to develop low carbon and renewable electric generating projects in Europe and North America. Advanced Power has more than 7,000 MW in operation, under development, construction or management in the United States and Europe. Together with the 1,182 MW South Field facility, the 700 MW Carroll County facility in operation in Carroll County, Ohio and the 1,100 MW Cricket Valley facility in New York, Advanced Power has developed three major infrastructure projects in the United States in 3½ years. Majority-owned by its senior management and Board members, Advanced Power has an office in Boston, MA and is registered in Zug, Switzerland.