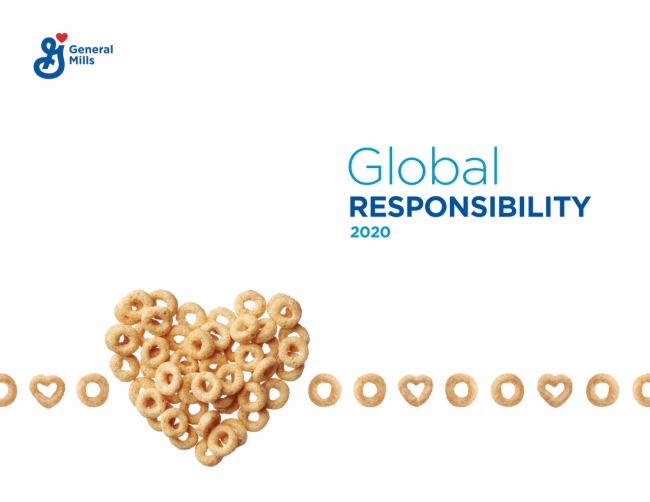 “We are in the food business,” said Jeff Harmening, chairman and CEO, General Mills. “And taking care of the land that sustains us all requires that we act as a force for good for our planet. That is why, for more than 50 years, we've reported our global responsibility results and progress. At a time with so many unknowns, when food is bringing a sense of comfort and normalcy, it's never been more important to commit ourselves to growing our food with responsibility and care.”

In 2019, General Mills and its Foundation committed to advance regenerative farming on one million acres of farmland, enabled 5.5 billion meals around the world through philanthropic partners and food donations, and invested in efforts that have collectively helped improve the lives of more than 22,000 smallholder farmers and their families.

“Our global presence allows General Mills to create real impact, at every level,” said Mary Jane Melendez, chief sustainability and social impact officer, General Mills. “We are committed to using our scale where it matters most. For us, that means advancing regenerative agriculture, supporting farmers across our value chain and accelerating our ongoing efforts to end hunger and reduce food waste.”

General Mills continually shapes its portfolio of products to contribute to the well-being of consumers and meet their varied needs. Progress in 2019 includes:

General Mills is committed to improving the health of the planet, with a goal to reduce greenhouse emissions across its full value chain by 28 percent by 2025. In 2019, the company announced plans to advance regenerative farming practices on one million acres of farmland by 2030. An estimated 80 percent of greenhouse gases in the food system come from agriculture, but regenerative techniques help counter their impact by pulling carbon from the air and storing it in soil. These methods also serve to enhance natural resources and farming communities. Other impactful progress in 2019 includes:

Since 2016, General Mills and its Foundation also have:

General Mills actively pursues a culture that acknowledges, respects and values all dimensions of diversity, including gender, race, sexual orientation, ability, backgrounds and beliefs. As of December 2019:

Community: Supporting the Well-Being of People and Planet Worldwide

General Mills and its Foundation make a meaningful impact in global communities through employee volunteerism, investment in food security and recovery, and community giving efforts, including disaster relief.

For five decades, General Mills has publicly reported its progress in areas of social and environmental importance, demonstrating a longstanding commitment to these areas. The company has continued that commitment in the face of the unprecedented COVID-19 pandemic, announcing enhanced benefits and support for employees and recently, additional funding and operational shifts to fight food insecurity.