Will Fear of COVID-19 and Loathing of Capitalism Drive Systemic Change?

Capitalism’s shield has been breached - we can now see its dark soul. 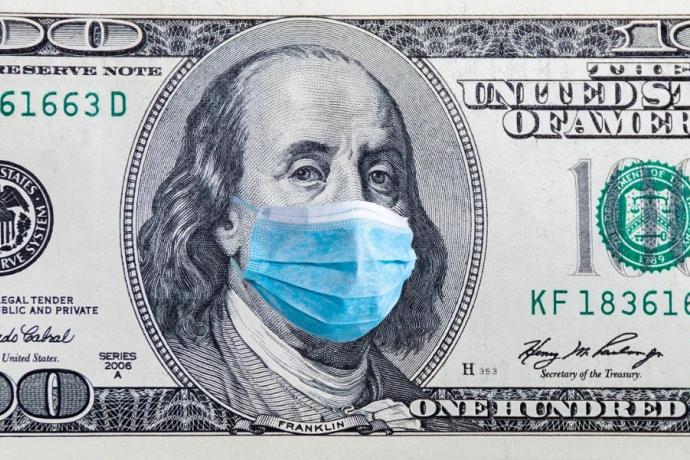 This article was originally published on Medium

Texas Lieutenant Governor, Dan Patrick recently said, and I paraphrase, it’s not only OK, it’s good for America to throw granny under the bus to save the economy. Just let that sink in for a moment. What kind of culture would tolerate that kind of thinking. And when I say tolerate I don’t mean tolerate from a legal perspective - I’m referring to the perspective of social norms. The norms that would shame a public figure for uttering such a callous and thoughtless statement.

If that isn’t disturbing enough, I recently saw a picture that was so outrageous that I had to check to see if it was actually true - sadly it was.

Recently in Las Vegas, in an effort to contain Covid19, the homeless were relocated from a shelter after a resident tested positive for Covid19. They occupants were placed into a parking lot with paint outlining little 6 foot cubicles to keep these poor souls from infecting each other. They did try to lay down some carpet but when they found that it couldn’t be sterilized they gave up on that idea and provided nothing but concrete.

Wow...in a city with thousands of empty hotel rooms, a convention centre and a sports arena, rather than help the homeless stay healthy in a way that let’s them keep their dignity and have a modicum of comfort, they were corralled and sequestered into a parking lot, away from the rest of “us” using the least amount of money and effort.

There was no outcry and barely a mention in the news, a couple of tweets and it was over. In much the same way as Texas Lieutenant Governor Dan Patrick felt no need to retract his brutal comments, this story too, revealed yet another window into the soul of a heartless predatory capitalist system.

Is it fair to say that this system doesn’t care about people? Maybe, but perhaps it would be more accurate to say that the system cares more about consumption and corporate profits than it does about people. Or better yet, perhaps an even more accurate way to phrase it would be, that while the system does place an oversized value on the strength of the economy, people are still valued, but only inasmuch as they are able to consume.

There’s a lot of talk about how quickly we can get back to business as usual (BAU) but is that really what we want - to return to a system that makes its decisions from an “economy first” mindset - ahead of public health and well-being. A system that rewards corporations for exploiting people and destroying the environment. A system that glorifies extreme wealth and rising corporate profits while punishing poverty. A system that uses the corporate media to tarnish long standing metrics of societal well-being in favour of the narrow metric of a rising stock market.

You can put all the lipstick you want on this system, you can focus on the few good stories of individual perseverance, there are many to choose from, but when you zoom out and look at the system as a whole the evidence is clear. Free Market Capitalism, as it is practiced in America, is a brutal system that systematically places the 99% into a predatory arena, while the 0.1%, enjoy corporate socialism where their financial mistakes are repeatedly forgiven with corporate bailouts and their stock portfolios are buoyed with Government backed, never ending streams of capital and friendly legislation.

Normally government policy is a slow process - it can take years to develop and decades to assess. But Covid-19 changes that - suddenly timelines are compressed and policy decisions come rapidly. We have a unique opportunity to see how governments work, (and think) as their choices play out in near real time. In particular, their bias towards policies that choose to protect the economy over people.

Back in January and early February, the whole world could see the explosive growth of this virus, and our political “leaders” had a chance to contain it, BUT as is often the case, guided by the corporate elite and the neoliberal script, they said no.

For the next 4-5 crucial weeks in opposition to the advice from health care professionals who said that it was vital to contain the illness and restrict air travel, the airports remained open and the virus exploded around the world. Western leaders in both Europe and North America failed us in three distinct ways. First, they squandered the opportunity to act on the early data that China provided in terms of the ease and speed with which the virus spread. Second, they failed to prepare logistically and provide their hospitals with the necessary supplies. And finally they failed to inform and educate the public of what was likely to come.

The “economy first'' ideology that drives Capitalism has led to a collective failure in global “leadership”. Decisions that were clearly best for public health, societal well-being and long term economic stability, were forsaken for decisions that bolstered the short term interests of corporations and the stock market. We seem to have forgotten that a strong government with a commitment to wellbeing is the foundation of a flourishing and resilient society. And that when society is organized in this way, we are best prepared to overcome big social, economic and environmental challenges - not via an economy devoid of corporate regulations - hoping that profit driven companies will magically work for the common good.

Covid-19 has captured global attention and is forcing action in a way that the fight for a stable climate never could. Not because the climate strategy was wrong - it wasn’t - not because scientists are poor communicators - they’re not - and certainly not because we couldn’t find the elusive business case - it doesn’t exist. No...the climate fight is failing because it's trying to change behaviour without the benefit of our evolutionary instincts, whereas Covid-19 doesn’t need to win a long complicated argument to bring about behaviour change - it’s benefiting from instincts that have been hardwired into our ape brains since before we came down from the trees, 4 million years ago. Whether we recognize it or not, our biology is dictating the response to both of these crises.

As humans, we’re most responsive to real time threats where cause and effect are undeniable, and as it so happens, the Covid-19 crisis has both of these features. First, let’s look at the time frame between policy choices and outcomes. The condensed time frame rapidly connects a failed policy of “economy first” capitalism to death, from an invisible and highly transmissible contagion. Covid-19 has exposed the soul of capitalism and in doing so, it has coalesced our attention towards the true systemic villain in a way that the climate fight never could.

The second factor that is missing in the climate fight and that is central to Covid-19 is a healthy dose of fear. This emotion removes the need to convince anyone to do things differently — fear takes care of that. Everyone on the planet is triggered and thinking about their personal safety, and how they interact with other people. This is something that the climate movement was never able to achieve — at an individual level, everyone feeling the urgency to change their ways.

Covid-19 Changed How We See The World

As a fast moving crisis, laced with fear, where policy decisions clearly show cause and effect, Covid-19 has provided great insight into how we as humans respond to threats:

The speed of the crisis gave us a look behind the curtain and revealed exactly what “economy first” policies can do to a society, and in doing so, it exposed the soul of capitalism. But that speed of transmission had other effects too.

It triggered our human fear response and within weeks people across the world were making radical behaviour changes to protect personal safety in ways that we never could have imagined just a few months ago. Considering that we can’t even get people to carry a reusable mug for their morning coffee, the level of behavioural change that has recently been triggered by Covid-19 is staggering.

It’s rapid connection of policy to outcomes coalesced our attention towards the true systemic villain in a way that the climate fight never could.

Government finally proved once and for all that with enough pressure to save lives, they’re capable of massive disruption to the system and reallocation of capital.

Covid-19 has shown us beyond any doubt that Capitalism’s “economy first” mentality is a cancer to society, and if left unchecked it will systematically destroy millions of lives and ultimately our planet’s ability to sustain us. Unfortunately the climate movement wasn’t able to expose this - it simply moved too slowly to capture people's attention and it lacked the necessary dose of fear.

Covid-19 taught us that while we’re the smartest animal on the planet we still can’t get away from our evolutionary instincts. In the case of the climate crisis, those instincts simply aren’t activated, and that’s leading us down a dangerous path towards extinction, just like every other hominid cousin of ours from the past.

This is Our Chance

Every leader knew what was coming with Covid-19 but they held firm to their "economy first" dogma. Only when it became obvious that they would lose public support when the body bags started piling up, did they change gears.

Our system is broken. It lies on a toxic foundation that exploits people and the environment. Trying to find the elusive business case to create a more sustainable business model is like trying to grow a healthier crop, with a few tweaks, on polluted soil. You can add all the sustainability and impact investing you want...the result will still be social harm and ecosystem destruction.

We’ve identified the problem. Now is the time for hope. The pieces of the puzzle are in place. We have the solutions. We have the chance to do something special and re-create our system of commerce. As they say, a crisis is a terrible thing to waste. Let’s get it done!

Brad Zarnett is a Canadian sustainability strategist, writer and blogger. He is the Founder of the Toronto Sustainability Speaker Series (TSSS). Brad writes about why Corporate Sustainability and our attempts to address Climate Change are a massive systemic failure and what to do about it. You can follow Brad on twitter: @bradzarnett, LinkedIn, Medium or via email.