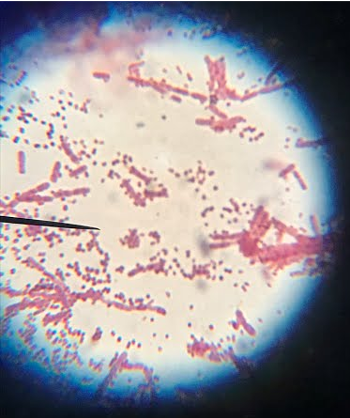 Gram stained slide is bacteria that the students grew. They then prepared a slide of their work so they could identify defining characteristics.

As Nelson Mandela says, “Education is the most powerful weapon which you can use to change the world.” Education is the key to eliminating gender inequality, to reducing poverty, to creating a sustainable planet, to preventing needless deaths and illness, and to fostering peace.

With another new day during this global pandemic, comes another way for ON Semiconductor to make an impact in the local community, specifically through educational opportunities for children. This time, ON Semiconductor is proudly funding microbiology research at Pocatello High School, located in southeast Idaho.

As part of a global initiative, Pocatello High School was one of only two high schools internationally who, alongside 21 university institutions, were selected to participate in a program in which students conduct research on antibiotic resistance. The students are also cultivating bacteria from soil samples to determine if any of those bacteria produce antibiotics that could potentially be used to treat bacterial infections in humans.

Antibiotic resistance does not discriminate against age, race or even industry making it one of the world’s most urgent public health problems. Per the Center for Disease Control and Prevention, at least 2.8 million people in the United States are infected because of antibiotic-resistant bacteria or fungi annually, and more than 35,000 people die as a result. While these statistics are shocking, public awareness and an appetite for solutions give way to great opportunity for scientific advancement.

At Pocatello High School, students are studying this global health problem with relevant real world, hands-on experiments – made possible by ON Semiconductor’s giving program. The grant provided bacticinerators to sterilize reusable inoculating loops to reduce disposable waste, a -80 degree freezer for bacteria preservation and unlimited duplication, lab glassware, and all of the variety of agars the students are using to elicit growth of certain types of bacteria from the soil.

The grant also funded the protective gear for the students and faculty, new lab equipment (including microscopes and slides) and lab furniture including chemical resistant tables and fume hoods. The funding transformed an under-utilized science space into a biosafety level two lab.

“I feel privileged on so many levels to be able to offer this program to students. I am grateful beyond words for the donation from ON Semiconductor. As an individual, it is helping me fulfill on two dreams at the same time. In college, I had a hard time choosing between teaching and research in antibiotic resistance. With the implementation of this class, I get to lead a team of student researchers studying my favorite topic. What matters to me most is that students are finding a love for science. It is the best possible outcome I could have ever hoped for. Everyone involved with this program comes out for the better. That’s an amazing impact, thanks to ON semiconductor.”

ON Semiconductor’s Giving Program commits over two-million dollars annually to communities around the world, and STEAM education is a funding priority throughout the organization.

As William Butler Yeats once said, “Education is not the filling of the pail, but the lighting of a fire” and ON Semiconductor is enthusiastically devoted to fueling that fire for generations to come.

Read more about how ON Semiconductor is making a positive community impact through its grant program.