How ViacomCBS Is Connecting to Fans During the Coronavirus Crisis

‘Sonic The Hedgehog’ goes on-demand early and ‘The Daily Social Distancing Show with Trevor Noah’ moves from digital to linear. 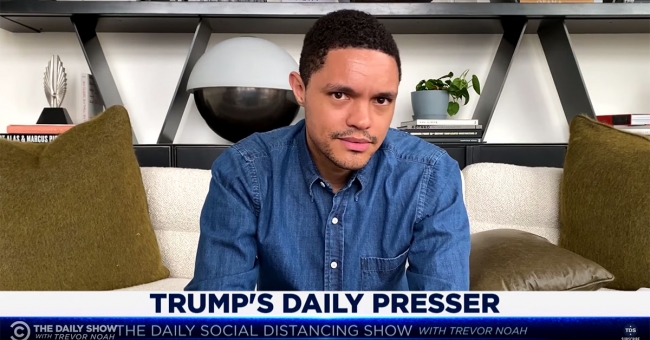 The coronavirus has caused a radical shift in how—and how much—content is consumed around the globe. With millions of people forgoing typical social activities, there’s been an increased demand for options that can offer on-demand information and entertainment. Behind the camera, news crews are working amid unprecedented conditions to deliver constant updates, and late night shows known for slick in-studio productions are now finding creative ways to give fans daily boosts.

With this in mind, ViacomCBS brands have taken new approaches to support their fans during the global pandemic. The Daily Show With Trevor Noah has been doing segments from the host’s couch while Stephen Colbert delivered his monologue from the bathtub. Amidst the shuttering of movie theaters, Paramount Pictures announced that it will digitally release Sonic The Hedgehog on March 31, just 45 days since its theater launch.

ViacomCBS also partnered with the Ad Council and the U.S. government on a PSA campaign that encourages social distancing. Starting last week, the #AloneTogether campaign aired on linear television spots and via paid social media. Talent from across the brand portfolio, including Trevor Noah and David Spade, as well as accounts from shows like Siesta Key and Lip Sync Battle, participated in the campaign.

Here’s a look at how the brands at ViacomCBS are finding creative ways to keep audiences entertained and informed:

Bellator fighter Cris Cyborg is offering daily quarantine workouts on YouTube as gyms and studios around the world are closed in order to lessen the spread of COVID-19. The daily workouts—which launched in partnership with the ViacomCBS #AloneTogether campaign—will be live on Cyborg’s channel beginning at 10 a.m. PST every Monday through Friday and they will be saved for users to watch at any time.

On March 23, CBS All Access announced it would offer 30-day free trials to new customers, just ahead of the finale of Star Trek: Picard.

The streamer enlisted the help of Jean-Luc Picard himself, Sir Patrick Stewart, to deliver the news.

“That is the heart of Star Trek, how to become more human,” Stewart says in the clip. The month-long trial is redeemable until April 23 by using the code “GIFT” when signing up.

The CBS News division has continued to deliver round-the-clock coverage on-air and online despite several staffers testing positive for the virus. In the last weeks, a smaller than normal staff has produced CBS Sunday Morning and 60 Minutes. Affiliates from Boston and San Francisco are helping CBSN, the streaming network, with additional space and resources. CBS News Radio moved its technical base from New York to Washington. And, the local CBS news channel in New York has led with anchors from Los Angeles and San Francisco.

CBS This Morning moved its studio location several times last week, relocating temporarily to the the DC studio of CBS Evening News with Norah O’Donnell since its normal West 57th Street studio had to close. Last Thursday it broadcast from the Ed Sullivan theater, the usual home of The Late Show With Stephen Colbert. “I couldn’t even promise [the anchors] teleprompters at first,” producer Diana Miller told Variety. “They’re so flexible. It’s so clear that they want to be on the air. They’re incredibly resilient, positive and curious. They are the face of the operation and they are good at keeping us all calm.”

The Late Show With Stephen Colbert stopped filming with a live audience on March 12 and in the days following, the show shut down in-studio production, but ramped up production remotely.

The Late Show recorded new monologues March 16-18 from Colbert’s home, which were edited into scheduled repeats of The Late Show. They aired on online and on CBS. Of note were the locations he chose: on March 16, Colbert delivered his monologue from his bathtub; on the 17th, he sat beside a fire in his backyard; and on Wednesday, March 18, he greeted viewers from his front porch.

The Late Late Show With James Corden will air a primetime special on March 30 at 10 p.m. EST on CBS in the wake of COVID-19.

Corden will host the show, titled Homefest: James Corden’s Late Late Show Special from his garage and feature special guests via webcam, like Will Ferrel and David Blaine. There will also be special music performances from BTS, Billie Eilish with Finneas, Dua Lipa, Andrea Bocelli, John Legend, and more.

Since The Daily Show stopped filming last week, host Trevor Noah has been filming digital segments and monologues from his couch and guests have appeared via video chat. The digital version of the late night talk show, labeled The Daily Social Distancing Show with Trevor Noah, which began streaming via online and social channels on March 18 will air on linear beginning Monday, March 23. The online episodes were an immediate hit—earning recognition for the production value and amassing more than 3 million viewers on YouTube within the first day of release.

Noah’s also created educational messages related to the coronavirus for the ViacomCBS’ #AloneTogether PSA campaign, as well as for the Mayor’s Office of NYC. On The Daily Show YouTube page, viewers can donate to No Kid Hungry via a simple button. The show’s fundraising feature has already helped raise more than $140,000 toward the organization.

David Spade, who hosts the late night show Lights Out With David Spade, for the network has been recording jokes and monologues from his Los Angeles home, which he’s nicknamed “the bunker.” Spade is recording the videos himself and then passing them along to Comedy Central to post on YouTube and Twitter, but he’s uploaded the videos to Instagram on his own.

To encourage music lovers to practice self-quarantine, MTV brought back its classic show Unplugged. The first installment featured an at-home unplugged performance from Wyclef Jean. The series is available to stream on YouTube, Twitter, and Instagram. Additional artists will be announced soon.

Nickelodeon launched its summer schedule a few months early. The scheduled programming is designed for school-age children. The network is also airing two new animated shows on a daily basis: The Casagrandes, a spin-off of its popular show The Loud House, and It’s Pony, a British cartoon. Audiences have also been able to watch marathons of shows like SpongeBob SquarePants, PAW Patrol, and Henry Danger.

To help inform parents and children about the pandemic, the network has launched a special website called NickHelps.com, which features informational short-form content about COVID-19 for children and downloadable activities. Children can receive hand washing tips from the Bubble Guppies or learn about social distancing from SpongeBob.

The Nick Jr. preschool streaming service, Noggin, also launched on Apple TV in 25 territories, including the U.S., the UK, Germany, and France. New customers receive a free 7-day trial through the app.

Paramount Pictures announced last Friday that the family-friendly flick Sonic The Hedgehog, based on the Sega video game character, would be available on-demand on March 31.

As well, the studio’s film The Love Birds will be released to Netflix since its theatrical and SXSW premieres had to be cancelled.

In addition to joining ViacomCBS’ #AloneTogether campaign, Pluto TV is seeding a rotating selection of 20-plus news channels on its homepage so that users can immerse themselves in the headlines as soon as they turn the service on.

Pluto TV is also sending push notifications synced with breaking news on its CBSN channel. Prior to the COVID-19 outbreak, Pluto TV primarily used push notifications as a marketing and promotional tool, but the hunger for information in the current moment helped them understand its potential as a safety information system.

“We’re always coordinating with CBSN when news is coming in, and when press conferences are happening. We’re trying to keep our audience as up to date in real-time as possible,” said Pluto TV Senior Vice President of Programming Scott Reich. “Keeping them informed is the number one priority.”

On March 20, Showtime announced it will offer a free 30-day trial to new customers. Users who sign up before May 3 will have access to the premium network’s hits like Billions, Shameless, The Chi, and Ray Donovan.

As many schools have announced weeks-long closures, Simon Schuster issued a temporary policy whereby teachers and booksellers can read its children’s books aloud to classes and customers over streaming platforms.

The publisher has also given authors information about making the most of their social media accounts during coronavirus and pledged to double its annual contribution to the Book Industry Charitable Foundation, which helps booksellers in need.

To give people a breather from their new day-to-day, the network is also offering bi-weekly yoga class from Julie Montagu on Facebook Live at 2 p.m. EST on Mondays and Fridays. The brand also has a #CutenessBreak Twitter thread featuring its vast library of cute animal content on one mega-thread, as well as new weekly #MondayMotivation Twitter campaign, in which fans can get a personalized, hand-drawn illustration of a motivation or mantra to add to their vision board.

As part of the #AloneTogether campaign, the network is also participating in Facebook Watch parties every Tuesday and Thursday from 4 to 6 p.m. EST, featuring a back-to-back watch party of two Aerial America episodes together that engage fans with state-by-state trivia.