Women's History Month - A Time to Reflect and Be Inspired 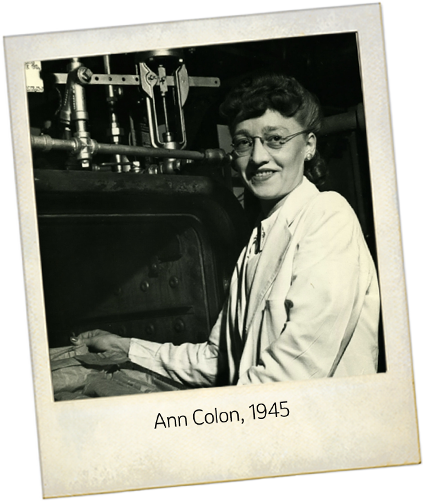 In celebration of women’s history month, we highlight some of the women whose hard work and tenacity have inspired us and made an impact on our past, present and future.

Ann Colon – First woman to celebrate her 50th anniversary at Merck
Anna “Ann” Colon joined Merck on August 15, 1919 — about 10 days after her 14th birthday. She graduated grammar school and was looking for a job to help support her family after her father became ill. Merck was an ideal workplace for Ann – it was close to her home and had a reputation as being a good employer for young women. And it paid well: 20 cents an hour or $9 per week.

Ann started as a messenger in the packaging department, and by 1933, she became supervisor. She later served as a supervisor in the sterile products department where the company manufactured what was then a new antibiotic and the first effective treatment for tuberculosis.

In 1969, Ann became the first woman to celebrate her 50th anniversary at Merck. She retired the following year as a scheduling and cost supervisor in the dry and liquid packaging department.

Grace Winterling – Merck’s first female corporate officer
Grace Winterling began her career during World War II in the priorities department before taking on supervisory roles in the systems and procedures, organization planning and office services departments. In 1954, she became an administrative assistant in the Office of the Secretary, and in 1957, Grace was elected to assistant secretary — a role that made her the first woman to become one of Merck’s corporate officers. The distinction of a female corporate officer was so noteworthy, it made headlines in local newspapers.

After 15 years as a corporate officer, Grace was named president of the Merck Company Foundation, which continues to fund qualified, eligible nonprofit and philanthropic organizations today. Her efforts expanded the company’s contributions and explored new avenues for philanthropy. Grace retired in 1983 after spending much of her 40 years at the company in leadership positions.

Dorothy was committed to ensuring our company was a leader in protecting the environment. She spearheaded numerous processes for reducing the company’s emissions and chemical releases, making Merck a model for the industry as one of the first companies to publicly commit to pollution reductions. Dorothy said, “Merck’s commitment challenged other companies to provide the same level of self-examination, to go beyond simply meeting the requirements.”

In 1991, Bowers received the Chairman’s Award, one of the highest honors for Merck employees, for her work on the Clean Air Amendments.

After 25 years with the company, Dorothy retired in 1999. By then, she had helped elevate environmental protection to be among Merck’s highest business priorities.

Christine Stubbs – A leader in manufacturing and diversity and inclusion
Christine “Chris” Stubbs was one of Merck’s most active employees in promoting equal opportunity. Chris, the first woman to graduate from Howard University with a degree in chemical engineering, joined Merck in 1983. By her tenth anniversary with the company, Chris led materials management at the Flint River manufacturing facility in Albany, Georgia, where she managed a staff of 31. This alone made Chris quite impressive, but it was her additional work promoting diversity that earned her the title as one of U.S. Black Engineer magazine’s 1993 Black Engineers of the Year.

While managing her large workload, Chris collaborated with her alma mater to develop curricula that strengthened the skills and marketability of minority students. She also helped to facilitate Merck’s participation in events sponsored by the National Society of Black Engineers and the National Organization for the Professional Advancement of Black Chemists and Chemical Engineers. These were just some of the many efforts that led John Zabriskie, former president of the Merck Manufacturing Division, to credit Chris for helping Merck to become “an industry leader in equal opportunity employment and development.”

The Merck Women's Network, one of Merck's 10 employee business resource groups, is marking its 25th anniversary this year. Learn more about Global Diversity and Inclusion at Merck.