With #AloneTogether, the Media Industry Unites to Drive Awareness

The campaign, created by ViacomCBS in partnership with the Ad Council, educates audiences on the importance of social distancing and drives unity through entertainment. 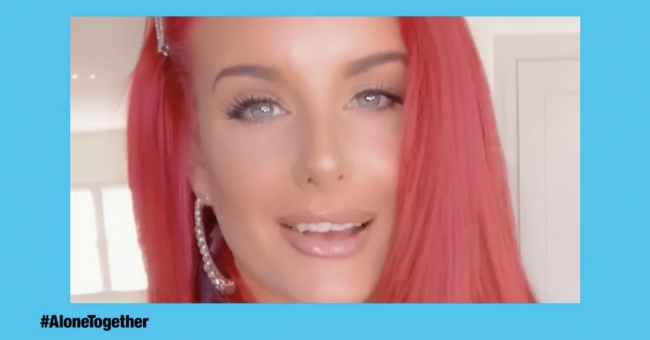 Even in isolation, we’re not alone. That’s the message that’s at the core of the #AloneTogether campaign, which calls on audiences around the world to stay at home amid the coronavirus crisis.

Created by the ViacomCBS Entertainment and Youth brands and distributed widely via a partnership with the Ad Council, the goal of #AloneTogether is to educate audiences about the importance of social distancing and to promote a sense of unity through entertainment during a time of self-isolation. The campaign is purposefully brand and media agnostic, enabling it to scale quickly through additional media partners who can tailor the message to their audiences and platforms.

“The COVID-19 virus has impacted our lives in every possible way. There is no doubt that we are in uncharted territory, and with that comes so many unknowns. But it’s important that we focus on what we do know and how we can help,” says Lisa Sherman, president and CEO of the Ad Council. “The #AloneTogether work is a needed rallying cry—one that shows how we can unite as one, even when we feel most alone. The message has already been embraced by media partners and influencers across the country, proving once again that we are a powerful force when we work together.”

The campaign kicked off on March 16, with a social-led effort by ViacomCBS’ Entertainment and Youth brands (which include MTV, Comedy Central, Paramount Network, Smithsonian Channel, Pop TV, CMT, VH1, TV Land, and Logo).

Since then, other companies and partners have used the campaign toolkit to customize and share the #AloneTogether message. iHeartMedia is airing audio versions of the PSA, Clear Channel Outdoor plans to extend the campaign across its out-of-home media, Snapchat is featuring #AloneTogether creative throughout its platform and developing two custom filters, and Twitter developed a custom emoji users can share.

“We initiated this campaign to ensure that people around the world understand the importance of staying at home for the safety and health of everyone, as well as to support our fans at this moment,” says Jacqueline Parkes, CMO & EVP, Digital Studios for ViacomCBS’ Entertainment & Youth Brands. “For ViacomCBS’ Entertainment and Youth brands specifically, we wanted to ensure that young people understand the important role they can play in stopping the spread of this virus.”

For ViacomCBS, the social amplification of #AloneTogether is part of an ongoing conversation with fans. Each brand within the portfolio has adapted the campaign with their talent and for their audiences. MTV created #MTVUnpluggedAtHome, a series of acoustic performances that kicked off with Wyclef Jean; Comedy Central launched My Beautiful Bunker, a series featuring comedian Hanna Dickinson; VH1 posted a TikTok of Bobby Lytes of Love & Hip Hop Miami washing his hands; the cast of Pop TV’s One Day at a Time posted a selfie compilation video on Facebook; TV Land’s Younger created a supercut establishing Diana Trout as “The OG Social Distancer”; and Paramount Network promoted a St. Patrick’s Day marathon of Bar Rescue on YouTube.

During the first week of the campaign, ViacomCBS’ Entertainment and Youth brands—as well as supporting efforts from CBS, BET, Nickelodeon, Showtime, Pluto TV, and Awesomeness—created more than 500 social posts, leading to over 3 million engagements, 43 million video views, and 127 million impressions. ViacomCBS brands will continue to create original social content to amplify the campaign’s mission. This content will include live takeovers and messages from talent, as well as profiles of young people who are helping create positive change during the pandemic.

The campaign has also extended to air across ViacomCBS’ linear networks around the world. Each brand again tailored the messages to their audiences. MTV made custom linear spots featuring talent including DJ Khaled, Justina Valentine, and Pauly D, Paramount Network plugged a stay-at-home movies night, and Comedy Central even developed original linear programming with The Daily Show with Trevor Noah spin-off, The Daily Social Distancing Show, which launched on digital before moving to linear.

#AloneTogether PSAs are airing English and Spanish across the U.S., with 14 local language versions airing in 50 countries across Western, Eastern, and Central Europe, the UK, the Middle East, and Africa, as well as all of Latin America and parts of Southeast Asia. It also appears across CBS Interactive’s digital platforms and on Pluto TV in the U.S., Latin America, and Europe.

During the first three days of the linear campaign, the #AloneTogeth PSAs aired more than 750 times in the U.S., including on CBS during primetime. They were also inserted into consumer streams on Pluto TV, the company’s ad-supported streaming platform, more than 600,000 times.

In a complement to #AloneTogether, other brands within the ViacomCBS portfolio kicked off efforts specific to their audiences. CBS launched #InThisTogether, a campaign featuring personal videos from CBS Entertainment, All Access, News, and Sports stars comforting fans with messages that focus on social distancing, community, and the power of entertainment.

Nickelodeon created #KidsTogether as a spinoff of the #AloneTogether campaign. Delivered in 14 languages for kids and families around the world, the pro-social initiative features Nick IP and talent—like Spongebob Squarepants, Bubble Guppies, and The Casagrandes —providing tips on staying healthy and suggesting activities to do while they’re at home.

Across its portfolio, ViacomCBS reaches every demographic in the U.S., with the largest share of linear viewing and a social media following of 825 million.

“The key to this campaign is to engage audiences across all ages and demographics, which is something ViacomCBS has unique experience in given our portfolio of brands,” says Josh Line, chief brand officer for ViacomCBS. “We know how to talk to diverse audiences with a tailored approach across platforms, and we’re lucky to be in a position to leverage that expertise in a way that can hopefully help to keep people safe and healthy.”

With reporting assistance from Kelby Clark