When their generation’s health is at risk and they get a little dose of fear…they spring into action.

When their generation’s health is at risk and they get a little dose of fear…they spring into action. 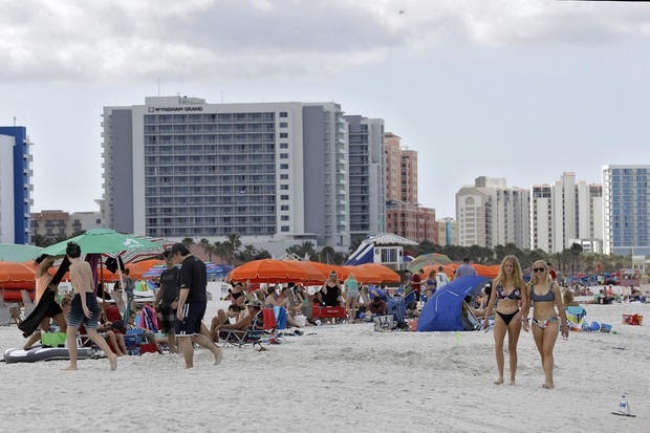 This article was originally published on Medium.

How do you get young people to take social isolation seriously? In a recent announcement by Washington Governor, Jay Inslee, he said, “Someone asked me the other day, ‘what’s the penalty for a young person going out to a restaurant, or hanging out in a social gathering?’ The penalty is that you might kill your grandparent”.

One might think that this is enough to get millenials to slow down and take the messaging from their government seriously - but apparently it’s not. Despite warnings from public health experts, recent photos and videos show beaches across the state of Florida, packed with spring breakers lying side by side with no apparent concern for the pandemic.

According to Dr. Bruce Aylward, senior adviser to the Director-General of the World Health Organization (WHO), “One of the things that terrifies me now is this sense of invulnerability among millennials.” Alyward goes on to say that “COVID-19 is more dangerous for young people than many realize.” In fact, recent data from Italy shows that, “ten percent of the people who are in ICUs in Italy are in their 20s, 30s or 40s, these are young, healthy people with no co-morbidities, no other diseases.”

A Threat to Public Health

The fact that this virus can kill young people, while alarming, is not the main concern. We know that the disease can be passed on asymptomatically - young people can feel fine, go to the beach or dance parties and pass the illness between each other with no one suspecting a thing.

In the realm of public health, these gatherings are very concerning. They’re not only dangerous to the youth themselves but it’s dangerous for everyone who they may come into contact with for days to come. That could be an unsuspecting visit to a lonely grandparent or a random group of shoppers at the grocery store who just happen to open the same fridge door where you bought your milk 10 minutes earlier. How many people will those random shoppers infect in the coming days - never knowing that they now carry the illness?

No, those are not innocent gatherings among the youth looking to blow off steam - they are disease spreading parties that are a threat to public health and wellbeing.

Why are young people not taking this seriously? Are they not getting the message that Covid19 is a deadly disease? Are millenials as a group just callous and they don’t care about society?  Or perhaps, they just don’t feel the urgency to change. That’s not that crazy an idea - is it? (I explore the idea of urgency in this article, “Is Covid-19 the Silver Bullet For a Stable Climate?”)

Before we start pointing fingers at reckless youth - let’s pause - there’s a lot of blame to go around. Take the parents and grandparents of those same partying millennials who have proven to be completely unable to change their wasteful carbon spewing ways. Even after 74 weeks of Greta’s strikes and marches, the global leaders can’t even bring themselves to end fossil fuel subsidies. Now who’s being reckless?

It’s interesting that the same boomers who have shirked their responsibility to reduce the planet’s carbon emissions in order to pass along a survivable planet to their children, are all up in arms about this “reckless” behaviour from millennials. Suddenly when their generation's health is at risk and they get a little dose of fear, they spring into action. Perspective is a wonderful thing.

Isn’t the message to boomers similar to what Washington Governor Inslee said to the young people about possibly killing their grandparents - only this time in reverse? Let’s just alter some of the words in his message:

“Boomers, if you don’t change your climate destroying habits and effect some dramatic regulatory changes - you might effectively be killing your kids and grandkids, or, if that seems hyperbolic, at least you’ll be making their lives a living hell in a world where food scarcity, mass migrations and political instability are the norm.”

Let’s be clear - no one is behaving rationally here with the intent to harm others. But perhaps, we can agree that in both instances, it’s just hard to get someone to change their ways if they don’t feel that there is an urgent need. Both boomers and millennials have different viewpoints and each feels justified in their lack of action but maybe in the end, the lack of urgency comes from a poorly designed system that doesn’t put enough value on health and wellbeing.

Climate change has been facing an uphill battle from the beginning - it’s a slow motion crisis that simply does not evoke fear. The argument that you need to do it for your kids, or to use Governor’s Inslee’s warning, do it so that you don’t kill your kids - feels forced - the timeline is just too far off. And besides, as a parent you have lots of things that you need to protect your children from before they might succumb to climate change. So you negate it, delay it and rationalize that there’s no grand urgency to change.

Patience Has Run Out

So where does that leave us. Well, for one, it tells us who is in charge. The folks that run this planet, after only a few weeks, are tired of trying to effect behavioural change in millennials. Now that they feel exposed, they’re happy to reach into their government toolbag and lock down cities and states to ensure that the choice to do the wrong thing - ignore social isolation - is no longer an option. And if that doesn’t work, the police will be there to enforce the new guidelines.

Imagine what could have been done to protect the climate if that approach was taken with the boomer generation that has felt no need to use the tools at their disposal to restrict environmentally destructive and public harming behaviour? No - they chose another route, to allow businesses to use market forces to effect the needed changes. Well, we know how that worked out - the Davos elite never miss a chance to tell us what really matters to them.

We always knew that one way or another, now or later, climate change was going to be painful. And while we might not want to admit it, we also knew that the tepid response by government and business, that was largely accepted by society, was little more than a collective white lie to help us sleep at night. The bottom line is that our approach was never going to leave us in control and the bill that we amassed by exploiting nature would someday come due.

The important question going forward is what can we learn from the Covid19 crisis. Firstly, we now know that we have the ability to lower our emissions by shutting down the true source of the problem - the global economy. But I certainly hope that we have better options than killing what might be, tens of millions of people and inflicting this kind of mass pain on humanity.

Second, we learned that government can step in and make drastic changes when two criteria are met; it’s politically advantageous to them and they themselves feel threatened. That’s the fear component that the climate movement was never able to harness.

And finally, the climate movement needs to regroup and tighten their message to one that is about protecting public health and wellbeing. Covid19 wounded our climate plundering system and that’s a start, but it will be up to us to pick up the pieces and build a new economic system. The option to do harm against other people, animals or ecosystems must be completely removed from the business model. A new flourishing economy must reward those who create wellbeing...I hope that we can learn from our mistakes.