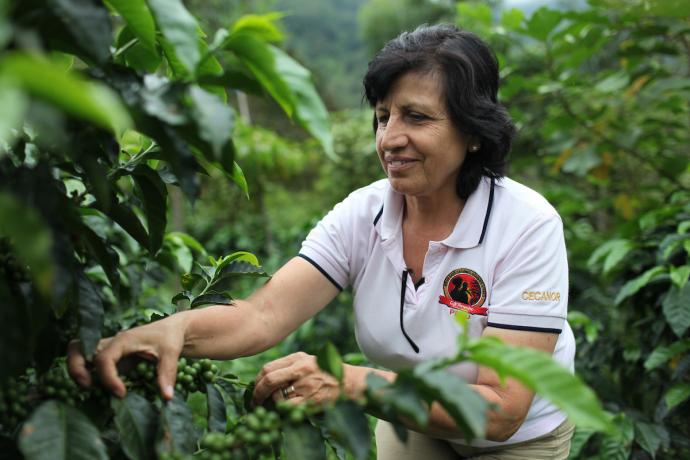 International Women’s Day was on March 8, and as we consider what it means to achieve true gender equality, we must also consider the ingrained structural and insidious cultural/societal frameworks that hold women back. There is still a long way to go to achieve total gender equality, but there is also hope to be found in the stories of women who fight daily for it.

Today, I’ll explore several interviews with female coffee workers from Fair Trade Certified™ cooperatives in Latin America about their experiences with machismo and discuss how fair trade helps women rise against some of its harmful effects.

First, I want to acknowledge the complex history of the term machismo. While often used negatively here in the United States, the term can also refer to more “honorable” male traits. Rather than use machismo as a put-down or an example of cultural backwardness, I want to recognize that the term itself has no positive or negative value and rather refers to a large set of cultural norms. Throughout interviews with fair trade women coffee workers, I have found that they used the term machismo to refer to a generalized sexism and misogyny. I will use the term toxic machismo to acknowledge the term’s complexity and possibility for misuse.

In Latin American culture, the toxic machista, or hypermasculine male, demands the respect of his children and his wife. He is physically dominant, he can out-drink and out-brawl his companions, and he is quick to anger. Toxic machismo draws as much on male stereotypes as it does on female: The wife of a machista is expected to be servile and loyal, able to put up with her husband’s outbursts and love him regardless (source). The stereotype correlates to a real problem in Peru: The country saw almost 150,000 reports of domestic violence in 2016, and of the 121 female homicides reported in 2017, 80 percent of the perpetrators were men who knew their victim. These numbers only reflect a small fraction of actual occurrences of violence, suggests a 2017 survey, which found that fewer than 30 percent of women in Peru reported violence when it occurred in fear of further violence or recrimination.

These effects manifest in the daily lives of women all over the world and frequently come up in conversations with female coffee workers at Fair Trade Certified farms in Peru. Paula Chavez, president of the ASPROAGRO coffee cooperative, says, “Before fair trade, as women, we never participated in a single meeting. Only the men were involved. Women were responsible for looking after the children, and the men did not think very highly of us. There was a bit of machismo. Those who were in charge, who made the decisions, were the men.”

Fair Trade USA, a nonprofit organization, is the leading third-party certifier of Fair Trade products in North America. Fair Trade USA audits and certifies transactions between companies and their international suppliers to ensure that the farmers and workers producing Fair Trade Certified goods were paid fair prices and wages, work in safe conditions, protect the environment, and receive community development funds to empower and uplift their communities. Fair Trade USA also educates consumers, brings new manufacturers and retailers into the system, and provides farming communities with tools, training and resources to thrive as international businesspeople. Visit www.FairTradeCertified.org for more information.