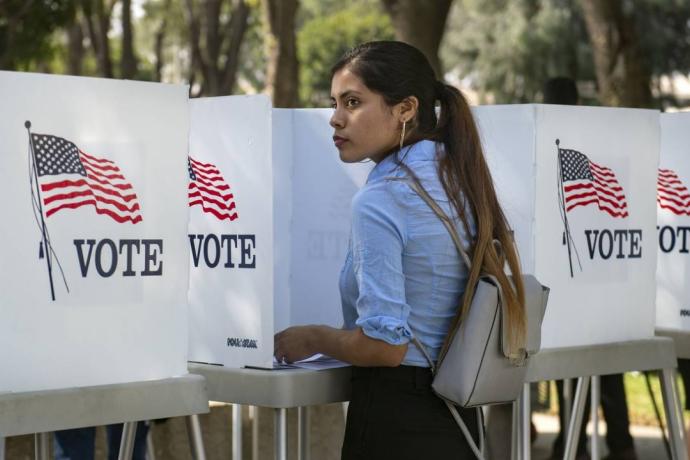 Mark your calendar for November 3 — that’s the day most of the United States will turn up to vote. But there are other ways, and other days, to make your voice heard at the polls. Whether your state allows you to vote absentee, or if you simply want to show up to your local polling place a few days early, Saturday, October 24, is a great day to do it.

Introducing the inaugural Vote Early Day, a first-of-its-kind holiday celebrating American voters everywhere and championing your ability to cast your ballot. It’s brought to you by MTV and 65 partners, including March for Our Lives and the NAACP; as well as BuzzFeed, Levi’s, Twitter, and more. The effort has also been cosigned by an advisory board helmed by Secretaries of State Alex Padilla (D-CA) and Brad Raffensperger (R-GA).

“Now more than ever, the country’s paying attention to elections and the importance of participating in our democracy,” Secretary Padilla told MTV News. “How we live our lives today is very different than it was 50 years ago, and how people have the opportunity to vote needs to be modernized. Offering early voting opportunities is a big piece of that.”

Voting laws vary, but most states offer some form of early voting option, whether by mail or at specified polling places. But the push is paying off: Over 40 percent of voters cast an advance ballot of some kind in the 2018 midterm elections, an all-time cap on a trend that has been ticking steadily upward since 2004. In California alone, more than 60 percent of registered voters cast their ballots by mail in 2018, and the state has rolled out plenty of reforms to ensure eligible citizens vote. (You can check here to see whether your state allows for early voting.)

While Georgia is prepping for its primary election on March 24, the state is also keeping an eye on the general election this November. “Half the people in Georgia vote early, and half show up on Election Tuesday,” Secretary Raffensperger said. “That helps us reduce the lines and some of the pressures that you have when everybody shows up on a Tuesday. We’re working hard to keep those lines to 30 minutes or less, in accordance with the national goal.”

But voting lines were anything but quick on Super Tuesday this year, during which polling places were overloaded in several states, including California and Texas. (One man, Hervis Rogers, waited almost seven hours to vote in Houston; his ordeal earned national recognition as well as a call for reform from former Secretary of State Hillary Clinton.) Los Angeles County Supervisor Janice Hahn has since called for an investigation into how so many things went wrong on March 3, and the registrar’s office has apologized.

“That is another huge benefit for the benefits of early voting, and promoting early voting,” Padilla said. “The best way to minimize your chances of having to wait in line on election night is to vote early. And the more we can do to provide that opportunity and help people take advantage of that opportunity,” he believes, the better.

And while voter turnout among young people isn’t growing as anticipated, there are plenty of things you can do to correct that: Bring a friend with you when you show up to the polls on October 24, November 3, or any day in between.

“We want to demystify voting, and remove some of the trepidation that people could have about voting,” Raffensperger said. “It’s not scary, it’s easy. And bringing a friend is easy.” Padilla agreed, adding that, “Voting should be a celebration, not a solemn exercise. The exercising of our voting rights, whether it’s with family or friends or both, is something to be celebrated. Let’s make it a party.”

Whether you show up early or right on time is up to you — just make sure you show face at all, if you can.