Is Covid-19 the Silver Bullet for a Stable Climate?

We always knew that climate change was going to be painful… 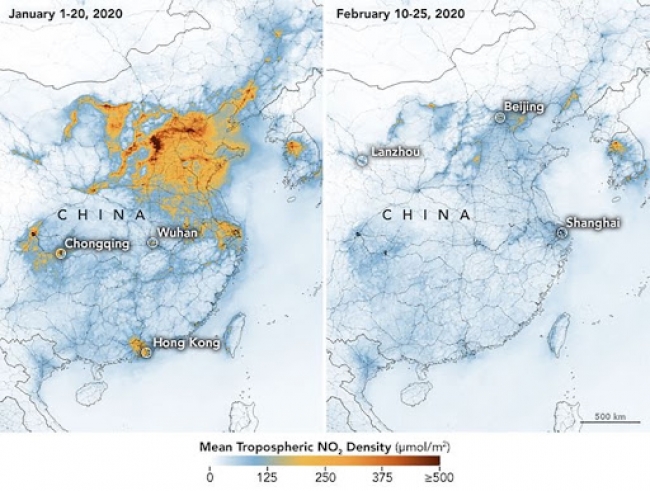 This article was originally published on Medium.

Something changed recently when I saw a map comparing the air over China before and after the country went into lockdown in an attempt to contain the Covid-19 Coronavirus. Slowly over the course of a week, I began to see the issue of climate change in a whole new light.

This might sound radical but please hear me out.

The path towards a stable climate will need to run through some kind of economic collapse. It will have nothing to do with a more sustainable business model or more progressive government action - both of those approaches have failed. Let’s face it - people just don’t feel the urgency to change how they live their lives and government is too weak and/or corrupt to lead the way.

Wait - stop with this negativity!

Perhaps you believe that we’ll find a technological fix like carbon capture or maybe you're a believer in the ability of solar, wind, tidal and algae as a basket of renewable solutions. Or maybe you think that Greta’s movement will force the hand of government to finally take the strong steps that we need. You might be right...maybe...maybe not. But I think late at night when we’re alone with our thoughts, we can see the writing on the wall. Our efforts for the last 30 years have failed and it’s no wonder - we’ve been pressing the wrong “change” button.

Climate change is a slow motion crisis - perfectly suited for politicians to kick down the road. To reduce emissions by the amount set out by scientists in the IPCC report requires a massive shrinking of the fossil fuel sector and a complete rethink as to how we conduct business. The amount of economic instability and job loss that this would create would be unprecedented. It’s political suicide - voters don’t support politicians who take their jobs for a crisis that’s decades in the future.

In hindsight, meaningful change was never going to happen before the crisis hit - besides being a political loser - the status quo is a massive windfall for the campaign-supporting super rich and corporate elite who have a vested interest in maintaining the climate plundering system. So politicians take the middle road - they talk about being environmental champions, they pretend to take strong actions, they sign the Paris Accords (which is nothing more than “immunity via collective failure”), and nothing of consequence happens.

Politicians say a lot of things about climate change but when you look at their actions the message is clear - the economy comes first. According to the neoliberal script, the best way to achieve this is by leaving business alone and not burdening it with a lot of pesky regulations. Efforts towards reducing environmental or social harm are encouraged as voluntary measures without regulations and of course, there are few if any penalties for non-compliance. All the actors in this performance are perfectly aligned to keep the current system in place. In this way, economic disruption is kept to a minimum, the elite continue to line their pockets, jobs are protected and voters continue to elect weak and visionless politicians - just like the ones we currently have. And of course, the environment pays the price.

For real change to occur there needs to be a trigger, something has to jolt us out of our familiar ways. Something has to alter our expectations about what the future will look like if we follow our current path. That is to say, we perceive a greater level of risk with our old behaviour as compared to trying something new. And that’s where a perfect dose of fear comes into the equation - that’s the activation button for us to collectively realize that it’s time to take the medicine that science tells us is necessary.

Our current approach to fighting for a stable climate isn't working. Our brains just don’t seem to grasp the gravity of this slow motion crisis. We need to engage a more primal response. We need to engage our limbic system so that it feels the urgency, that the danger is imminent and not 20, 50 or 100 years into the future. This is what we’ve been missing all along.

The Dream is Ending

Something has happened in the last two months that changes everything. A tiny virus has landed right in the middle of our green business fantasy - the one where a smooth transition to a sustainable economy is well within our grasp. Where we just need to make more eco-friendly purchases and force companies to meet that “green demand”...along with a few small behavioural changes like carrying a reusable coffee mug, riding a bike to work or going vegan.

We’ll that dream is coming to an end - this virus is about to shed light on a failed strategy that has persisted for far too long. Could this be the trigger that we’ve needed that will finally force us to get our emissions under control? Time will tell but as of now, as tragic as it is, this horrible virus seems to be the best chance we have to avert a climate disaster.

Covid-19 is like nature reasserting itself, turning on a switch that says enough is enough - if you won’t make the economic system more climate friendly then we’ll just shut the whole thing down. And we won’t make the same mistakes you did like trying to use the greed of a predatory banking system to achieve positive results or by encouraging a movement to divest from fossil fuels. Our approach will achieve success by shutting down something even more fundamental to the economy than money or oil - people.

What makes Covid-19 so effective is that it captured our attention using fear. It’s forcing everyone on the planet to rethink and adjust to something that we never really thought about - how we interact with other people and how important those interactions are to the global economy. This is something that the climate movement was never able to achieve - at an individual level, everyone feeling the urgency to change their ways.

Now, if this sounds like a harsh way to address climate change - that’s because it is. It’s tragic that people are dying and it could get much worse. According to Julia Grant an infectious disease epidemiologist, “it’s likely that people you know will die from Covid-19".  But we always knew that climate change was going to be disruptive and take millions of lives - we just thought that it was going to happen at some distant point in the future under someone else’s watch. Our planet’s collective decision to “kick the can down the road” has all but ensured that our response to climate change will not be on our timeline - we're going to let nature decide.

I guess the most important question is - do you believe the science about what will happen to our planet if we continue to let the climate unravel? If you don’t then I’m shocked that you read this far and if you do, then you need to take this model for change seriously and reflect on all of the failures that have led us to this point.

Yes, But The Economy

We’ve tried everything we know on how to reduce emissions while expanding the economy and we have little to show for it. But we won’t likely have to face our failure anytime soon as the consequences of our inaction won’t be felt for many years to come.

An “economy first” approach with Covid-19 is different - the results of this strategy have revealed themselves in near real-time. There were many experts who said at the beginning of the coronavirus outbreak that it was vital to contain the illness and restrict air travel but those warnings were ignored in favour of keeping the economy healthy - and of course now it’s too late. We are in the midst of a pandemic and our economy is showing it’s fragility. The very thing that we tried to protect is now under attack and lives are being lost at an alarming rate.

Whether we're talking about Covid-19 or Climate Change the similarities of an “economy first” approach are striking. We can likely guess that it won’t go well in the case of climate change but we now have a live example of how this strategy works when governments choose the economy over a mass mobilization designed to protect human wellbeing.

The Heart of the Problem

What makes Covid-19 so fascinating is that you don’t need to convince anyone to do things differently - the fear component takes care of that and new behaviours become the norm. And when that happens the rest of the pieces fall into place. Social distancing begins, the economy can’t function properly and emissions drop.

After so many years of playing by the rules of a climate plundering economy - Covid-19 comes on the scene and smashes them all. Trying to befriend and collaborate with those who are causing the harm has got us nowhere and wasted decades. Like a heat seeking missile - Covid-19 get’s directly to the source of the problem - our economic system - and it begins to dismantle it.

We have a big problem and it's not emissions. It's not plastic, it’s not deforestation, it’s not species and biodiversity loss - it’s the way we’ve chosen to run our society, to conduct business and to measure progress. Maybe ignoring biodiversity loss, ecosystem health and general human wellness, in favour of a healthy stock market was the wrong choice. The economic system that we use to run the planet is a disaster. It’s time to put our focus directly where it belongs.

If you believe in science then you need to take this model for change seriously. Nothing else has worked and the clock is ticking.
___________

Brad Zarnett is a Canadian sustainability strategist, writer and blogger. He is the Founder of the Toronto Sustainability Speaker Series (TSSS). Brad writes about why Corporate Sustainability and our attempts to address Climate Change are a massive systemic failure and what to do about it. You can follow Brad on twitter: @bradzarnett, LinkedIn, Medium or via email.