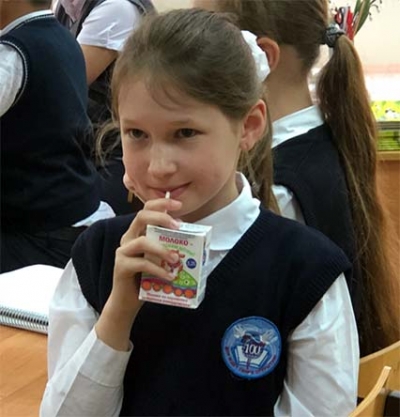 The challenge
In Russia, the milk and dairy products consumption level is decreasing. In 1989, the milk consumption level was 396 kg/capita/year. By 2016 it had decreased to 236 kg. Many children do not get the nutrition that they need. Calcium consumption is only half of the reference intake.  Funding for school feeding is also challenge and, in many cases, parents have to pay for school meals.

The Initiative
To improve child health and promote milk consumption, school milk was launched in 2005. School milk now reach 10% of the Russian school children.  In 2018, 1.3 million children in 18 of the 85 regions of Russia received school milk. New regions are added every year. For 2019, the Republic of Khakassia re-launched the programme and ten other regions are considering starting new programmes.  Most regions supply grades 1-4 but some also supply to children in the higher grades. School milk is always provided free of charge, funded by regional or municipal budgets.

The Russian NGO "The Health of Our Children" promotes the benefits of school nutrition at federal and regional levels. The NGO conducts various types of events including Milk Day, lessons about benefits of milk, contests, and festivals.  Information is shared with stakeholders through the school milk web site www.schoolmilk.info

School milk also contributes to better child health.  In Voronezh region, the cases of diseases of the endocrine system and nutritional and metabolic disorders declined by 29% in the period 2011-2013.  Research conducted at the Voronezh State Medical University in 2016, showed that children receiving hot meals and school milk have a better height index and suffer less from chronic conditions.
In Leningrad region, the number of systemic diseases among children in the school milk programme decreased by 11% between 2005 and 2015.  In Udmurtia region, the number of healthy children increased by 4.5% in 2006-2012.

"The Russian School Milk Programme is supported by the authorities, milk producers and public organizations in Russia. Thanks to these synergies it has been successfully implemented for 13 years.  Last year, the children participating in the programme consumed nearly 50 thousand tons of locally produced milk in school."

Olga Panova, Chief Executive, "The Health of Our Children".

Looking ahead
Efforts are being made to promote sustainability of the programme by adopting legislation that would make school milk compulsory for all regions.  The Agriculture Committee of the State Duma has proposed amendments in the education law meaning that all regions should provide its children with milk in school.  A federal "Child Nutrition Act" is to be introduced in 2019 and a new "Social Catering Act" will include standards for school food and nutrition.
â€‹
More regions introduce school milk as evidence is growing of the positive impacts it has on consumption and child health.  The positive Russian experiences are also shared with many other countries looking at introducing and developing their school feeding programmes.

Tetra Pak is a multinational food packaging and processing company.