Subaru surpasses goal and donates more than $175 million to over 1,170 national and local charity partners over last 12 years 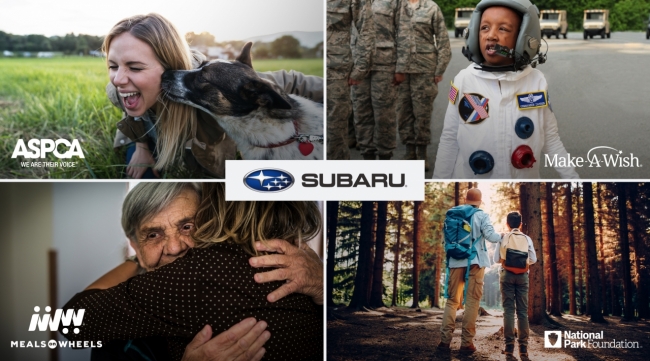 Subaru of America, Inc. today announced its donation of more than $24 million to national and local charities resulting from the 2019 Subaru Share the Love® Event. When combined with participating Subaru retailer donations, the total climbed to $30.4 million in 2019. Over twelve years, the total donated throughout the life of the campaign is more than $175 million. Starting in 2008, the Subaru Share the Love Event is held from mid-November to the end of the calendar year, during which Subaru donates $250 to the customer's choice of charities for every new Subaru vehicle purchased or leased at 632 participating Subaru retailers nationwide.

“Subaru of America, our retailers and our owners all share a common bond that unites us; we are extremely passionate about making a positive impact in local communities nationwide, and nothing aligns with our brand values more than the annual Subaru Share the Love Event,” said Alan Bethke, Senior Vice President of Marketing, Subaru of America, Inc. “We are immensely proud to work together with our retailers to give back and since 2008, we’re honored to have donated more than $175 million to a host of national and local charities.”

The twelfth iteration of the event marks the fourth consecutive year that Subaru did not place a cap on the total contributions to its national Share the Love Event charitable partners; the American Society for the Prevention of Cruelty to Animals® (ASPCA®), Make-A-Wish®, Meals on Wheels America® and the National Park Foundation™.

Additionally, Subaru retailers selected either one or two hometown charities from their local community to support, adding more than 695 local causes to the 2019 Subaru Share the Love Event. Select retailers participated in an additional hometown charity donation by offering their own 'per vehicle sold' contribution which generated nearly $6 million nationwide. Select retailers had the option to add an additional flat donation, which totaled more than $250 thousand. When paired with the $24 million contribution from Subaru of America, donations climbed to $30.4 million in 2019. As a result of Subaru customers' selection, national charity partners received nearly $10 million, while hometown charities received $20.4 million. Additionally, 221 Subaru retailers participated in a Subaru vehicle service donation, resulting in donations from Subaru and Subaru retailers totaling $1.1 million.

For the second consecutive year, the automaker hosted a special kickoff event on November 14, 2019, to celebrate the return of the Subaru Share the Love Event at its U.S. headquarters in Camden, NJ. In partnership with the Food Bank of South Jersey, Subaru employees donated and packed a record-breaking 15,000 'KidzPacks' to supply the food bank's weekend meal program for an entire school year, which is the equivalent of 60,000 meals. The KidzPack program provides four nutritionally balanced meals to more than 750 local Camden, NJ children to sustain them over the weekend, so they won't have to worry as much about where they will get their next meal. In addition to the Subaru HQ event, employees at Subaru regional offices and distribution centers throughout the U.S. partnered with local food banks and pantries to help feed neighbors in their respective communities. Through these events and donations, Subaru of America aims to improve local communities by supporting the environment, health and wellness, community needs, education and animal welfare across the country.

To learn about the Subaru Share the Love Event, please visit www.subaru.com/share.

About Subaru of America, Inc.
Subaru of America, Inc. (SOA) is a wholly owned subsidiary of Subaru Corporation of Japan. Headquartered at a zero-landfill office in Camden, N.J., the company markets and distributes Subaru vehicles, parts and accessories through a network of more than 630 retailers across the United States. All Subaru products are manufactured in zero-landfill production plants and Subaru of Indiana Automotive, Inc. is the only U.S. automobile production plant to be designated a backyard wildlife habitat by the National Wildlife Federation. SOA is guided by the Subaru Love Promise, which is the company’s vision to show love and respect to everyone, and to support its communities and customers nationwide. Over the past 20 years, SOA has donated more than $190 million to causes the Subaru family cares about, and its employees have logged more than 40,000 volunteer hours. As a company, Subaru believes it is important to do its part in making a positive impact in the world because it is the right thing to do.