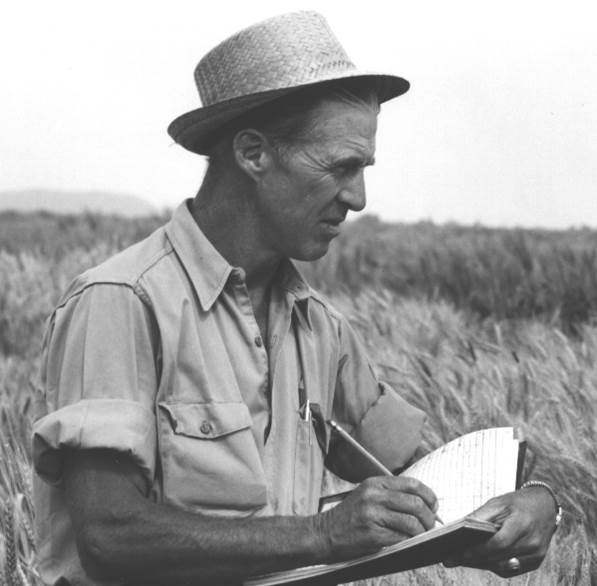 Almost 50 years ago, the Nobel prize committee sent a strong signal to the world, underpinning the social value of agriculture. Norman Borlaug (1914-2009) – the father of the so-called “green revolution”, a scientist who invented disease-resistant wheat and saved millions from starvation – was awarded with the Nobel Peace Prize in 1970.

During the Oslo ceremony, Borlaug held a speech about his work, titled “The Green Revolution, Peace and Humanity”.

“Civilization as it is known today”, he stated, “could not have evolved, nor can it survive, without an adequate food supply. (…) If you desire peace, cultivate justice, but at the same time cultivate the fields to produce more bread.”

Today, half a century after the Nobel Prize, similar questions still prevail more than ever. Food security and water management are increasingly understood as key concerns for global governance and stability. Against this backdrop, it is timely that the 2020 Munich Security Conference (MSC), which just came to an end, dealt with the topic of food security for the first time in its long history.

During the conference, I joined our CEO Werner Baumann as well as the member of our Supervisory Board and former President of the World Food Programme Ertharin Cousin, in some of the food security conversation. We received great feedback, e.g. from David Beasley, Executive Director for the UN World Food Programme.

As a leader in agriculture, we are starting to get our arms around the scale of Bayer’s responsibility. Just to give you one example: Almost half of all fungicides for wheat in Europe, the Middle East and Africa are Bayer products. They are essential for avoiding crop failures with wide-ranging consequences. Wheat is – and has historically been – at the center of agricultural goods when we talk about global crises.

The discussions in Munich have left me thinking about the need for next steps. Here are some of my immediate take-aways:

Climate Change is the most significant threat to food security which will in turn become a major security risk.

My first point is that climate change is by far the biggest threat to food security. That comes with no surprise but with a lot of evidence. 2020, for the first time ever, the top five risks in the annual World Economic Forum’s Global Risks Report were all climate-related. Near-term impacts of climate change add up, as the report says, to a “planetary emergency that will include loss of life and social and geopolitical tensions”.

For example, 93% of the climate security and military experts surveyed in the recent World Climate and Security Report assess that climate-driven water insecurity will pose a significant or higher risk to global security by 2030. Other studies emphasized the impact of climate change on migration or on crop insecurity.

Munich and Davos meetings are setting the agenda—but we need to engage with farmers on the ground. We aim to support 100 million smallholders to lead better lives.

While many discuss the climate-related issues from a 30,000 feet airplane-perspective, farmers can tell from looking at their fields. In 2019 alone, they had to deal with another dry summer in Europe, historic rainfalls in the United States, a massively destructive drought in Australia or parts of Africa, and locust infestations in East-Africa.

Last December, we presented our new sustainability strategy at Bayer. Beginning this year, sustainable business and financial success is equally important to us. Ten years ahead, in 2030, we want to achieve our ambitious sustainability goals in line with the Sustainable Development Goals (SDGs) of the United Nations.

One of the key elements is our focus on smallholder and subsistence farmers, a key group when it comes to strengthening global food security. 550 million smallholder farms exist all over the world and in developing countries, they produce about 80 percent of available food supplies–but in many cases, the producers themselves face hunger and poverty.

By 2030, we strive to provide 100 million smallholder farmers with access to training, tailored agricultural solutions and partnerships to increase their harvests and improve the local food supply. Most of the smallholder farming responsibilities rest on the shoulders of women. 25 years after the first UN Women Conference in Beijing, the world needs to prioritize significant efforts to improve women’s livelihoods in rural areas.

Our work has already begun:

My third take-away: Innovation will be key to feed the world of 10 billion people.

Another take-away is (once more) the importance of innovation: To secure food supply in a world growing to 10 billion and increasingly affluent people whilst we will be hit by an increasing impact of climate change, it will take the brightest minds and the smartest technologies to ensure we feed the world without starving the planet. My colleague Bob Reiter and his team are stewards of the by far largest R&D budget of an agri-business in history.

They are working passionately on future innovation for a more sustainable agriculture. Over the past few days, they have published fascinating insights into our innovation pipeline that are relevant to investors as well as the public. Achievements like hybrid rice or the short stature corn will have tremendous value for global food security. At Bayer, we are committed to make these innovations available for all growers, including access programs for smallholder farmers.

Lastly: Collaboration is the name of the game

As so often, it’s about the right mindset. We must agree that the global environmental, health and nutritional challenges we face today are complex, significant and inter-connected. No one country, multilateral institution or company can solve this challenge alone. As my colleague Ronald Guendel pointed out: “Collaboration is the name of the game when it comes to food security”.

In the run-up for the 2021 UN Food Systems Summit, we need to form new partnerships that enable us to work across existing conflict lines to de-carbonize agriculture, support farmers to better withstand extreme weather events, and tackle the extreme poverty in rural areas.

When it comes to food security, as the Australian author Julian Cribb phrased it in his recently released book “Food or War”:

“Food is one of the greatest, least recognized and most affordable ‘weapons of peace’ available to humanity.”

Or in the famous words of Lord John Boyd Orr (1880-1971), who became the first director-general of the Food and Agriculture Organization of the UN back in 1945:

Engaging in an honest, respectful and constructive debate about the challenges towards a more sustainable development strategy is the type of leadership expected from our generation. And it’s our joint responsibility to achieve the SDGs in 2030. To get there, we have less than #120months – 119 actually, and the clock is ticking.