Phumzile Mlambo-Ngcuka has spent her career expanding opportunities for women, and in 2020 is promoting education and digital literacy as a way to drive gender equality. 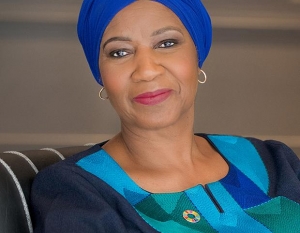 When Phumzile Mlambo-Ngcuka was a young girl in South Africa, she saw firsthand what fearless women could do. “The women in my community were leading in the times of apartheid, in very risky situations,” she recalls. “They were the ones that went out when the police were repressing people, and the men were running to hide.”

The South African politician, activist, and executive director of UN Women, Mlambo-Ngcuka has devoted her career to issues of human rights, equality, and social justice, both in the public and private sectors. She has declared 2020 “a year for women” with her “Generation Equality” initiative. The intent is to focus on the benefits of gender equality, not only for women and girls, “but for everyone whose lives will be changed by a fairer world,” she says.

If governments, humanitarian organizations, and global activists could wave a magic wand and drastically change the fates of millions of women all over the world, they would have to wish for one thing: an education for each of them. It’s the biggest game-changer for women in the developing world, beyond access to basics such as safe housing, clean water, and healthcare.

“When you create opportunity for women, you actually unleash a force for good,” Mlambo-Ngcuka says. “Working with women introduces additional power that makes the world a better place.”

Mlambo-Ngcuka reflected on the recently-opened HP LIFE Centers in the municipality of Huixquilucan in greater Mexico City, and the municipalities of Zapopan and Jocotepec in Jalisco state, the fruition of a key partnership announced last fall between HP and the United Nations. HP provided technology grants to these centers, where women can learn digital literacy and job-building skills through the HP Foundation’s free online learning platform, HP LIFE.

This month, the world marks International Women’s Day on March 8 and brings into the spotlight the disparities in access to education, training, and jobs that billions of women still face.

It’s one of the reasons that HP is also partnering with UN Women under UN Women’s Second Chance Education Initiative, with support from BHP Foundation, to expand digital learning opportunities for women and girls in five African countries: Senegal, South Africa, Nigeria, Democratic Republic of the Congo, and Morocco.

Mlambo-Ngcuka is a committed partner of HP and is helping the company make progress toward its goal of enabling better learning outcomes for 100 million people by 2025.

“When you think of a leader, certain qualities often come to mind: focused, intelligent, and impactful, to name a few,” HP’s Malejki says. “Executive Phumzile embodies all of these and brings purpose-driven, authentic leadership to UN Women. We couldn’t be more proud to partner with her and are excited by what’s to come.”

The Garage caught up with Mlambo-Ngcuka in New York.

You’ve had such an amazing life as an advocate, politician, leader — always advancing equality and opportunity. How did this come to be your passion and purpose?

At a very young age, I was exposed to the power of community work. My mother was a community worker, and she ran literacy classes at home. I was surprised to see that the women, which I had known in my community, could not read or write. Because for me, they were already role models. I wanted to help provide them with additional skills so they could become more impactful people in society.

Growing up in South Africa, what role did women play in the leadership you witnessed?

Women’s leadership was always something to marvel, especially when you see it happen in very risky situations in South Africa. They were the ones that went out when the police were killing and repressing people… The women would just go out there and stand in front of the police fence and face them, and demand for the police to leave their children. That courage was just amazing and it made you feel that, ‘When I grow up, I want to be that woman too.’

Tell us about the organization you lead now, UN Women.

Well, UN Women is the agency of the United Nations that is responsible for advancing gender equality. We work with member states to help them either deal with the laws that discriminate against women or put in place laws that will advance gender equality. We deal with the whole United Nation system in order to ensure that our sister agencies are doing their bits because they also have expertise that we don't have. We pilot programs in the field to check that the policies that we're pushing on member states actually work. We test them and we are then able to promote them because we have seen for ourselves that the policies are working.

What sort of challenges do women face when it comes to being able to pursue the career of their choice?

I have to say, first, that in the last 25 years, especially, girls’ education has advanced a lot. Member states have invested a lot in girls’ education, especially, in the countries that started at the bottom. In most countries, we saw girls enrollment and presence in school reaching parity with boys. In some it even exceeded it.

However, even with all that effort, there are 263 million girls who are out of school. That means that they are likely to marry too early, because if they are not at school, they are likely not just to be at home. There are girls who are unable to take care of their health needs and the health needs of their family who do not have the means to contribute to the economy to support themselves. As a result, they depend on partners who sometimes, and most of the time, actually, abuse them.

How do your programs help?

One of the reasons why we appreciate the partnership that we have with HP is that it brings investment. It provides second chance education for girls who otherwise would have dropped out of school. It provides learning to earn because in some cases, the girls are already young women and not children that can sit in a classroom. We also are able to introduce and expose girls to technology.

What role does technology play?

Well, technology can be an equalizer, but it’s not automatic. Technology also can be a discriminator. Those who have it will advance much further and widen the gap between the technology haves and the technology have-nots. If you just introduce technology without hand holding those who are likely to be left behind, there's always a risk that you’ll make the inequality worse.

How do the HP LIFE Centers help with that?

They provide us with an opportunity to leapfrog women into the 21st Century in a place where we can use content that is already tried and tested. We are seeing that, especially, in the program in Mexico. The women who are participating in the program are really gaining power. And because HP LIFE is also online, it can be accessed by many people all over the world. It gives us the potential to scale much more quickly and creates a community of best practices. Our responsibility is then to organize people, women, and to make them aware of this opportunity, to support and accompany them in their journey.

Why is it important to invest in this work?

There are as many as 500 million women between the ages of 15 and 24 who are illiterate. They are young enough to have a long life ahead of them, so you cannot give up on them. It's important to invest in them. I have seen women who have had a second chance education become community workers, learning to move in their community with newly gained skills that help other mothers to look after their own children. For example, they can teach people in the community about nutrition and the importance of boiling water.