This engineer and dancer is on a mission to empower more black and Latina girls to explore technology through dance. 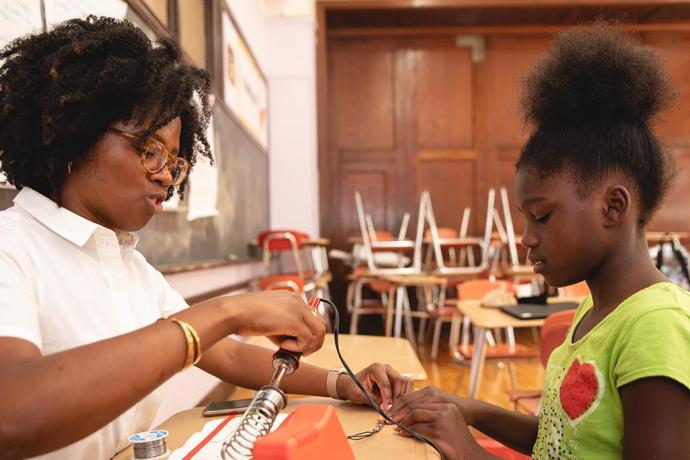 At the STEM from Dance summer camp, called Girls Rise Up, YamilÃ©e Toussaint Beach and other instructors teach software programming and electrical engineering principles along with choreography and dance. IMAGE TAKER STUDIOS

Yamilée Toussaint Beach is easily described as a polymath. Growing up on Long Island, she excelled in math and science in school, and after class dedicated herself to jazz, ballet, and modern dance.

“Pursuing engineering was just as possible for me as becoming a dancer or a writer or anything in the humanities,” she says. “I think a large part is the fact that both my parents have STEM-related (science, technology, engineering, and math) professions.” Now both retired, her father was a mechanical engineer, and her mother was a lab technician.

As she grew older, however, her outlook changed. As one of the few black women in her mechanical engineering courses at MIT, Toussaint Beach came to the stark realization that her experience had been unique. In the United States, black and Latina women are among the least represented groups in STEM occupations. After graduating from MIT, Toussaint Beach taught high school algebra through Teach for America, and witnessed firsthand how few girls of color were engaged in STEM subjects. She didn’t just want to know why. She wanted that to change.

In 2012, Toussaint Beach founded STEM from Dance, a New York-based nonprofit that offers underrepresented, often low-income girls ages 12 through 18 the opportunity to explore their own potential in STEM fields. During the program’s school residencies and summer camps, participants take a hands-on approach to hardware and coding with inspiration from their favorite pop stars. Girls program the light-up costumes and animated light shows for their own dance performances, often choreographed to music by the likes of Rihanna and Beyoncé. During the public recital at the program’s end, they get to go on stage and show off their work. As of 2018, more than 550 girls from 100 New York City schools and community-based programs had participated in STEM from Dance.

“This program is about taking something that’s been out of reach for students of color because of very clear barriers that they face,” Toussaint Beach says. “The lack of representation of girls of color is not due to ability. I do think that programs like STEM from Dance and others that exist all across the country will help us see a shift in the demographics.”

Toussaint Beach is the winner of AnitaB.org’s Educational Innovation Abie Award, which recognizes educators for developing new approaches to attracting female students to computing, engineering, and math in K-12 or undergraduate education. The award was presented at the annual Grace Hopper Celebration in Orlando — the world’s largest gathering of women technologists, held by AnitaB.org and sponsored in part by HP. Toussaint Beach recently spoke with the Garage about the powerful combination of engineering, dance, and opportunity in STEM from Dance.

Congratulations on your recent Abie Award. What does winning this mean for you?

Receiving the award is a tremendous honor. In a line of work that often goes unrecognized, it is a breath of fresh air to see how excited and supportive others are of STEM from Dance. I can't do this work alone, so it means a ton to have over 25,000 women cheering me on and partnering with me to see our vision come to fruition.

What inspired you to found STEM from Dance? What problems were you hoping to address?

The first day that I started studying engineering at MIT, it was very apparent how few women of color there were — it’s noticeable when you’re one or two out of 200. That lack of representation was one thing, and then when I was a teacher, I noticed this lack of coolness, or enjoyment taking place in math and science classes. There’s a sense of trepidation that a lot of people have, like “Oh, I’m not good at math.” To reverse that trend, I believe we have to really put our full effort in the positive direction.

How do you think exposure and representation in high school plays a role in increasing the numbers of black and Latina women in STEM careers?

When you look at the statistics at face value, some people believe that it’s due to a lack of ability, but it’s not. It’s about access. It’s about exposure and overcoming clear barriers. Growing up, I was not aware of girls being underrepresented in STEM fields. Fast forward to high school, I started to see that it was atypical for a girl of color to take AP (Advanced Placement, or college-level) physics. The further I went into these studies, the more I started to question, do I belong? Can I make it? Is this something I want to do? Those feelings have to do with who you see in the classroom around you.

What was the road to actually launching STEM from Dance? Were there any obstacles to getting off the ground?

I pitched the idea to the principal at the high school where I was teaching. It started with 10 or 15 students after school, dancing and working on their math homework, and it didn’t really capture the essence of what could happen when you bring the two together. It took a few years to really land on integration, not just the two side by side. I had a Eureka moment, seeing how in pop culture artists were using tech in their performances — these very elaborate stage designs and projections. That made me wonder how our students could recreate not just the dance aspect of it, but the tech that the artists were using. That's when we really found that spot where dance and STEM support one another.

Some of the images of STEM from Dance show girls installing lights in their shoes, and others dancing to light shows that they animated on the computer. Are these activities that you came up with?

A special part of the girls’ experience with STEM from Dance is being able to come up with the ideas themselves. We just really let them dream and see what matches with our resources. They’ve installed lights in their sneakers and on swing sets that appear on stage. Then they get the behind-the-scenes view of the tech. They make the circuits, solder the wires, add the sensors, and learn how to program it from there.

Very few, if any educational programs seem to include both dance and tech. How does STEM from Dance take a different approach?

When we talk about education, we try to separate these things. We say that STEM and dance come from different parts of the brain, and that different types of people can be good at them. But dance has always been a really, really huge part of my life. I would be in school during the day going to math club, and after school spend the rest of my time in the dance studio. I didn’t see that they were separate; I was just doing the things that I was interested in. Once I became a teacher, I saw that gap.
What happens after girls participate in STEM from Dance? What impact have you seen?

We definitely have one recent alumna who’s declared a major in computer science. Going forward, we plan to ramp up the support that we provide to the students once they've gone through the program. We find that they finish with confidence and belief in their potential to do something in STEM, but because that's a newfound belief, you really have to work hard to maintain it. We might give them one encouraging message, but they might hear 10 more that are discouraging. We're concentrating our efforts on continuing that momentum, to keep encouraging them towards what they’re capable of.