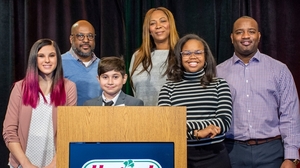 The Hormel African American Resource Group (HAARG) sponsors the annual essay contest to honor the vision and work of the slain civil rights leader. The assignment is the same each year; students must write a brief narrative about what King’s teachings mean for them today. HAARG members read every essay that gets submitted, choosing five finalists from each school, from which one first-place finisher for each school is selected.

“For nine years we have asked students to learn, reflect and personalize the message of Dr. King and what it means to them,” said Tommy Swearingen, HAARG president. “Every year, the essays are an inspiration to our team, and we couldn’t be prouder of the heartfelt writings of everyone who submitted. There are five winning essays chosen from each school, and today, three of our top prize-winning students were able to read their essays to our team members in Austin and throughout the company via live-streaming.”

The competition is intended to bring to light the value and importance of cultural differences and provides a platform for celebrating diversity. The goals of the program are to promote Dr. Martin Luther King’s legacy, encourage children to aim high, give them exposure to minority professionals in corporate America and to create a lasting partnership between Hormel Foods and local schools. Elementary and middle schools across the country are invited to join the competition.