Tour puts spotlight on those who nourish body, mind and soul 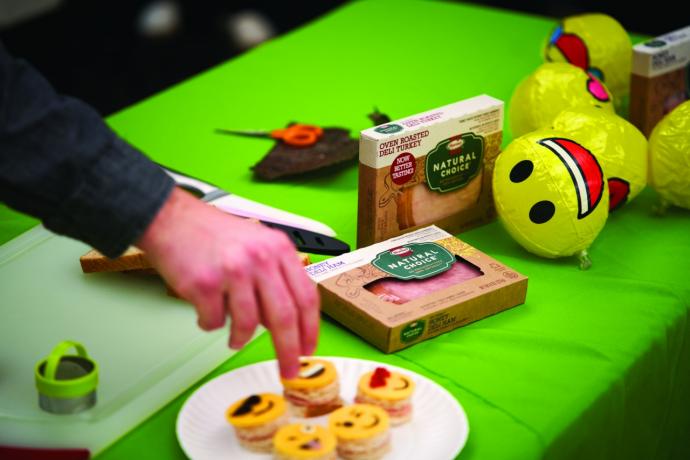 The makers of Hormel® Natural Choice® brand are on the road and in the airways, spotlighting organizations and people throughout the United States who work for the betterment of others. Already the tour has been to Dallas, Texas, and will soon stop in Louisville, Ky., Atlanta, Ga., Detroit, Mich., Minneapolis, Minn., and other cities, as it makes its way across the country.

The Good Feeds Us All Tour is an extension of the brand’s 2019 advertising campaign of the same name. It rolled out with a heartwarming commercial featuring Joey, a young boy who learns American sign language in order to ask his deaf classmate if she would like to share his sandwich. “Good feeds our connections. Good feeds us all,” the voiceover reminds us.

According to Beth Fehrenbacher, senior brand manager for the Hormel® Natural Choice® brand, the idea of the Good Feeds Us All Tour developed organically from a discussion around bringing the advertising campaign to life.

The Good Feeds Us All Tour began at the Minnesota State Academy for the Deaf, an homage to the Joey commercial. From there, the tour made its way to Dallas, Texas, where Hormel Foods team members highlighted and helped the Birthday Party Project, an organization that throws themed birthday parties with all the trimmings for kids who are often forgotten.

“Our mission is to bring joy to children through the magic of birthdays,” said Kimberly Nielsen, director of operations for the Birthday Party Project. “… Not everybody has a home, but everybody has a birthday. To be able to bring that to a child who needs a little extra joy… It just brings communities together.”

The 8-year-old nonprofit began with a party at one agency in Dallas, Texas. Today there are nearly 50 parties each month in 15 U.S. cities. Children in the system, young mothers without partners and homeless children are among the beneficiaries.

In addition to celebrating the work of the Birthday Party Project in other cities, the Good Feeds Us All Tour has the following stops and organizations on schedule:

According to Fehrenbacher, at the heart of the Good Feeds Us All Tour is a desire to show consumers what the brand is stands for, metaphorically speaking. “We want consumers to see that we care,” she said. “The tour is about finding opportunities where sandwiches can connect people and be the catalyst to allow those connections to take place. This isn’t about us coming in to save the day. It’s about giving those who are already doing it a platform to share their stories.”

Hormel Foods Corporation, based in Austin, Minn., is a global branded food company with over $9 billion in annual revenue across more than 80 countries worldwide. Its brands include SKIPPY®, SPAM®, Hormel® Natural Choice®, Applegate®, Justin’s®, Wholly®, Hormel® Black Label®, Columbus® and more than 30 other beloved brands. The company is a member of the S&P 500 Index and the S&P 500 Dividend Aristocrats, was named on the “Global 2000 World’s Best Employers” list by Forbes magazine for three straight years, is one of Fortune magazine’s most admired companies, has appeared on Corporate Responsibility Magazine’s “The 100 Best Corporate Citizens” list for the 11th year in a row, and has received numerous other awards and accolades for its corporate responsibility and community service efforts. The company lives by its purpose statement — Inspired People. Inspired Food.™ — to bring some of the world’s most trusted and iconic brands to tables across the globe. For more information, visit www.hormelfoods.com and http://csr.hormelfoods.com/.