Is Democracy a lost cause when trying to solve the climate crisis? 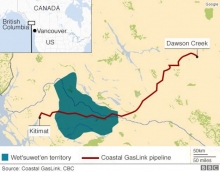 The contested pathway for the Trans Mountain Pipeline.

This article was originally published on Medium. To read the full 5-Part Series please click here.

Liberal Democracy doesn't appear to be able to address climate change or the underlying economic system that’s causing it. Yes, when things are good Democracy works just fine and there’s plenty of time to explore different options but during an emergency, when time is short, and countries need to make hard decisions quickly, the system falters.

Like an army during wartime, the window for discussion has closed. The time has come to execute the plan that will give us the best chance of keeping us within our carbon budget. Compromise which may work in normal times is a luxury that we can no longer afford. Just like on the battlefield - the time for debate is over.

A Perfect Storm of Inaction

The Democratic approach to addressing climate change has always been a juggling act. Politicians are torn between their own selfish desires to keep their jobs and doing what’s best for the country. This requires that the politician holds space for two policy ideas that are incompatible - support for a growing fossil fuel industry and promises to tackle climate change.

Yet somehow on election night this absurd narrative is bought by enough citizens and the politician wins. Now it’s time to pay back the financial support from business interests in the form of regulatory changes or tax reductions - this is to ensure that funding continues to flow for the next election. Simultaneously, politicians must appear to be doing what’s best for the country in terms of climate change which has become a key issue for the majority of voters.

“These two ideas can only co-exist in a world where logic is suspended and unicorns run free.”

The problem is that climate change is an all encompassing energy and systems challenge, and to address it effectively requires shrinking the fossil fuel sector. This is problematic for poll-watching politicians for two reasons. It interferes with their future election funding needs and it would also likely cause major disruptions in how we source and use energy, and that means job disruptions and inconvenience - not exactly a winner on voting day.

The wiggle room for politicians is that because climate change is relatively slow moving, they can pretend that they’re doing something when in fact nothing of consequence is happening. In this way, system disruption is minimal, jobs are protected and politicians can have money spending “photo ops” to further the mirage that they’re making progressive climate investments for the future. This is how you win elections in the era of liberal democracy and climate change.

To watch this dance in action, just watch my Prime Minister, Justin Trudeau, explain how he plans to expand pipelines while continuing to make promises about tackling climate change. These two ideas can only co-exist in a world where logic is suspended and unicorns run free.

If it’s not clear by now, (see Parts 1-3) corporations and the super rich control most of our liberal democracies and they've been interfering with progressive climate legislation for decades. The time for talk has passed and the battle lines are clear. On one hand we have a majority of people who are supported by science and who are deeply concerned about the future, and on the other hand we have the corporate elite and billionaires who are ignoring science and fighting for the status quo.

A successful citizen climate strategy must be simple, it must speak with one voice and it must have a clear message. The effort might seem like it’s directed at politicians but it’s actually the voting public that’s the primary audience - they need to be won over. If the public connects with the message then government will respond - if they don’t, then government will feel justified in ignoring the movement or using force to shut it down.

Stop stonewalling on progressive climate legislation at the behest of the corporate elite and billionaires. We demand three things from our politicians:

I think we all want to believe that our vote makes a difference but I’m not so sure anymore. I think we can elect good people like AOC, Elizabeth May (Canadian Green Party Leader) and Jacinda Arden (Prime Minister of New Zealand) who can raise good ideas in parliament/congress and the media, and sometimes when given the chance, they can even legislate progessive policy. But without a massive shift in voter behaviour, these individuals are often just a lone voice or part of a tenuous coalition in a sea of corporate backed legislation.

I don’t suggest that we give up on voting for candidates who will protect the climate, in fact, to the contrary, I think we need to fight harder than ever but I also think we also have to be realistic about the democratic process these days. I’m not hopeful that it will deliver the necessary political changes to protect our biosphere but I do think that it’s an important ingredient in the quest for change.

Something changed when Greta Thunberg entered the world stage. She was able to call out the lies and hypocrisy of our leaders like only a child could. It felt good to have someone in the room telling the so called leaders, what we’ve been thinking for so long, but as Greta would admit, it hasn’t changed policy in a meaningful way.

Global governments continue to subsidize the oil industry by trillions every year, and since the 2015 Paris agreement, 33 major global banks have collectively poured $1.9tn into fossil fuels, according to Rainforest Action’s report. Apparently corporate and political promises mean nothing.

Next came Extinction Rebellion. They tried to shock people to get their attention while also testing different ideas of how to interfere with the capitalist system. There was arguably some success but the demonstrations also caused many busy people to be inconvenienced and this was a serious misstep. As I stated earlier, the voting public is an essential ally that needs to be won over for any changes to occur. But none of it mattered to the government - their response was the same as with Greta - nothing. What did change however, was that the government pulled a new tool out of their toolbox by using the police to arrest demonstrators .

Justin Trudeau’s government, (that campaigned as champions of indiginous reconciliation) is currently in a heated dispute over the expansion route of the Trans Mountain Pipeline through Wet'suwet'en First Nation territory. (There are a lot of details to this story but I’m going to just try and hit the highlights -  if you’d like to read more about the dispute, please click here)

After the project was approved in 2019, the Wet’suwet’en First Nation put up a road blockade that stopped vehicles from entering the pipeline construction work site. What followed were a series of chess moves that continue to this day.

Next came an eviction notice by the Wet’suwet’en First Nation, telling the pipeline company that workers were “trespassing” on their unceded territory. This was followed by a Government issued court order calling for the removal of any Wet'suwet'en camps or obstructions blocking the road.

Next British Columbia’s RCMP was mobilized and sent to the site, where they awaited further orders to use force. And with that action, in solidarity with the Wet’suwet’en First nation, other indiginous groups across the country established rail blockades. This caused CN Rail to shut down its eastern network, which effectively stopped all cross-country freight trains. This has been going on for approximately 3 weeks and in that time the RCMP and the Ontario Provincial Police have also been mobilized, often within view of the blockades as a show of force, as they await Justin Trudeau’s order to move in.

The inevitable economy and jobs spin

The government claims that the blockades are hurting Canadians. There are disruptions to supply chains and now both CN and Via Rail have announced 450 and “nearly 1000” temporary layoffs. Nice timing for the narrative that will allow the government to say that it’s fighting for Canadian jobs.

Clearly the indiginous action got the attention of the government and that’s a good thing but  Trudueau is being attacked for being weak and for allowing the economy to be hijacked and finally 5 days ago the pressure reached a boiling point. At a press conference Justin Trudeau said that patience has run out and that “the barricades must come down.” https://www.youtube.com/watch?v=5ZAXQlzzvcQ

So far it has been peaceful but his challenge isn’t going away. Some barricades have been voluntarily disbanded, others have been disbanded peacefully through arrests but some are still standing and others are still popping up. How far will this go? How much force will the government use? Only time will tell.

Negotiate at the barrel of a gun.

It’s important to note that during the standoff the government said that they want to solve this through dialogue, and there has been some, but the Hereditary Chiefs of the Wet'suwet'en First Nation said that they won’t negotiate at the barrel of a gun. And that brings up the question as to whether this is really a negotiation or is the Government just looking to strong arm the Wet'suwet'en First Nation into allowing the construction to continue. It’s not like the government will take no for an answer. So what kind of negotiation is it if the outcome is already predetermined?

And incidentally, have you ever noticed that those with the power cling to the rule of law as a reason to force their might onto the less powerful? Laws don’t magically mean that something is right. After all, slavery was legal in the United States until 1865 and women weren’t allowed to vote in Canada until 1922 and not until 1940 in Quebec.

Is civil disobedience that interferes with the capitalist system a viable way to drive change in climate policy? We’re watching a real time example unfold here in Canada. Here are some points to consider.

Can Democracy, with all of its flaws, be used to address the climate crisis? Is civil disobedience the best chance we have? It seems like a wild card at best - no government wants to look weak or foolish.

In many ways it’s a game of chicken - who will blink first? How far will the government go in its use of force? How hard will the resistance fight? How many people have to be arrested or lives lost for the government to feel pressure and reverse its policy?

The corporate elite and billionaires will never give up their power without a fight - and they fight dirty. The government has access to the police, the military and the corporate media who they can call on anytime to pitch their narrative and/or to shut down the demonstrations with force. It’s happening right now to our indiginous people - stay tuned because we're about to learn a valuable lesson about the viability of civil disobedience.

In the final part of this series (Part 5) I will look at what our choices are if government doesn’t respond. What other options do we have?

To read the full series, “Surviving Climate Change: Where Should We Place Our Hope? Business, Government or Ourselves.” Please click here for Part 1