The New Car-free Commute: How You’ll Get Around in the Megacity of the Near Future

A new generation of lighter, more efficient, 3D-manufactured vehicles could be the next small thing in sustainable transportation. 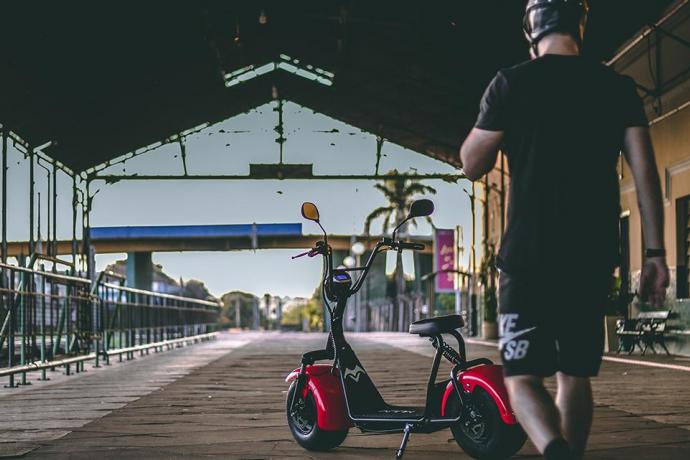 As urban centers become more dense, micromobility holds out the promise of getting around in a more efficient way that's better for the environment.

Contrary to science-fiction visions of the 21st century, the skies over today’s cities aren’t abuzz with flying cars. This may not be a bad thing, considering that nearly 70% of the world’s population is expected to live in cities by 2050 — it would be an air traffic control nightmare, to say the least.

Currently, there are 33 megacities in the world — cities with populations of 10 million or more. By 2030, six more cities are expected to achieve that status. As urban centers become more dense, the threat of pollution increases, particularly in places where poor air quality is already affecting public health.

Even in cities with well-developed public transportation networks, traffic congestion has increased or shown no signs of improving. McKinsey & Company reports that between 2010 and 2016, congestion rose by 30% in New York, 14% in London, and 9% in Paris. Nearly 75% of the cities included in the Traffic Index report by GPS developer TomTom had increased or stable congestion levels between 2017 and 2018. Out of all the car trips taken in the most congested urban areas in the US, nearly half are less than three miles.

This has led to a new era of short-distance transportation, or “micromobility” — a proliferation of bicycle-sharing schemes, electric bikes, and scooters, as well as the rise (and sometimes fall) of new inventions, such as electric skateboards, hoverboards, Segways and even electric unicycles. “The reason electric micromobility has become more popular is convenience — particularly considering the traffic, parking charges, congestion charges, and the lack of parking spaces,” says Christopher Minasians, editor-in-chief of WhichEV, a website focused on news and reviews related to electric vehicles.

New innovations in micromobility could also make the vehicles far more sustainable than cars, meeting consumer demand for convenience and sustainability. “Consumers are definitely looking for more sustainable solutions,” says Camille Caron, director of education and sustainability for 3D Print at HP.  She says consumers’ growing desire for transparency and responsible sourcing has led to a focus on sustainable materials and manufacturing, including the use of 3D printing to reduce waste and increase efficiency in the production of vehicles. Volkswagen, for example, the world's largest auto group, is integrating HP Metal Jet parts into its designs.

The rise of electric micromobility

In the US, the EU, and China, the micromobility market is estimated to be worth a combined $300 billion to $500 billion by 2030. Already, $5.7 billion has been invested in micromobility start-ups since 2015. Uber and Lyft, companies that have made their fortunes through the use of cars, are now also headed for this market.

“A lot of car manufacturers are now developing e-motorbikes, or very small pod-shaped vehicles,” explains Minasians. “Initially, they were seen as uncool in the industry, but they’ve become a lot chicer and more stylish, and you can get 60-odd miles on a single charge.”

A surge of innovation has led to new forms of electric vehicles that could make micromobility more appealing to the car-loving public, including Seat’s electric, four-wheeled two-seater Minimo, marketed as “the best of a car and a motorcycle.” With a rounded, pod-like roof and asymmetrical doors that slide up rather than open to the side, the Minimo is nimble and narrow with a driver’s seat at the front and a passenger seat at the back.

UK-based EAV’s rickshaw-like electric bikes for cargo delivery have a covered bike seat for the driver at the front and an enclosed cargo space at the back. “They get from point A to B very quickly and don’t need to worry about parking, and they don’t have the repair and maintenance costs of a traditional engine,” says Minasians.

While the rapid growth of the micromobility market hasn’t been without its challenges, including problems with city regulators, vandalism, as well as questions about its true environmental impact, the total number of overall micromobility trips in the US reached 84 million in 2018, up from 35 million in 2017, according to National Association of City Transportation Officials.

“Our main target is to reduce the need for cars for short distances,” says Pitkänen. “Research shows that 70% of the daily journeys made in Finland are less than 10 km [six miles]. And when we look at cities and resorts, the percentage of those short-distance journeys is even higher.”

Finland is setting an example in terms of reducing pollution from cars: A recent survey suggested that nearly 20% of Finns plan to give up their cars over the next five years, with 40% of car owners reporting they have already reduced their car use and increased bicycle or public transportation use. While in the US, the total number of cars and the mileage traveled has continued to increase, a survey of car owners from different age groups found that 21% of people age 18 to 34 would rather bike, walk, or skate to work. Only 31% say they always expect to own a car, in contrast to 52% of 45 to 64-year-olds.

Scouter Mobility’s focus on sustainability is rooted in 3D printing, which makes a vehicle lifecycle more sustainable, from creating opportunities to use recycled materials to experimenting with innovative design.

Working with Pekka Ketola, CEO of 3DStep, a 3D printing-based manufacturing services company, the company developed it first micromobility product, the Scouter, a two-seater electric quadricycle with a battery that lasts for more than 15 miles and can be topped up by pedaling.

“We are trying to get car users to use their own body to move by pedaling, so that they can be zero-emission and healthy,” says Pitkänen. “This is very important for us, not only for protecting the planet, but also in order to do something that avoids using pollutive energy sources.”

With a 550-pound weight limit, the Scouter is not just a way of getting around, but also suitable for transporting goods, while being able to make use of bike lanes and accessible to anyone without a driver’s license.

The quadricycle’s frame is made of steel from SSAB, a Sweden-based steel manufacturer, and then cut, bent, and welded together in Finland. The HP Jet Fusion 4200 3D printer is used to create parts such as the steering wheel and mud covers.

HP’s Jet Fusion printers melt powder particles to build up a part layer by layer. They selectively use a fusing agent that deploys thermal energy from infrared lamps and a detailing agent for forming crisp edges and smooth surfaces. The powder-based technology specifically helps to reduce material waste. “HP printers are highly efficient in terms of material: They are able to reuse 80% of the powder,” says Caron. “And when we start thinking about combining parts in using complex geometries that achieve the same functions with less structure and lower material consumption, that’s when 3D printing can really help a great deal.”

Pitkänen says 3D printing was critical during the prototyping stage for the Scouter, for elements such as the display frame, the handbrake, and parts of pedals. 3D printing also makes it easy to provide customizable options for commercial uses of the Scouter, such as decking it out in a particular brand’s colors and logos, as well as modifying its build to turn it into a mobile restaurant or pizza delivery vehicle, for example. In 2016, the Scouter received an electric vehicle innovation award from the Finnish city of Tampere, where the initial prototypes were created.

Scouter Mobility is currently taking reservations for vehicles available this summer. Scouters cost about 8,500 euros and are only available in Finland for now, but Pitkänen and Ketola hope to expand to the Asia-Pacific region. “Our main target is countries where the pollution problems are the biggest and where the need is highest,” says Pitkänen, highlighting that for warmer climates, the Scouter can come with a solar panel, which doubles as a sunroof that could make the vehicle self-charging.

Along with reduced emissions from the vehicles themselves, Pitkänen notes that another sustainability benefit is that 3D printing Scouters allows for the possibility of “microfactories” that produce vehicles locally, versus shipping them around the world — a practice that could become more common as 3D printing gains traction.

“When we think about manufacturing locally, not only does that create economic development for the region itself, it also reduces the energy consumption and the cost of shipping,” Caron says. “We’re entering a new era of in-time and on-demand manufacturing.”

Find out how automation in manufacturing could change the game for women in historically male-dominated fields.