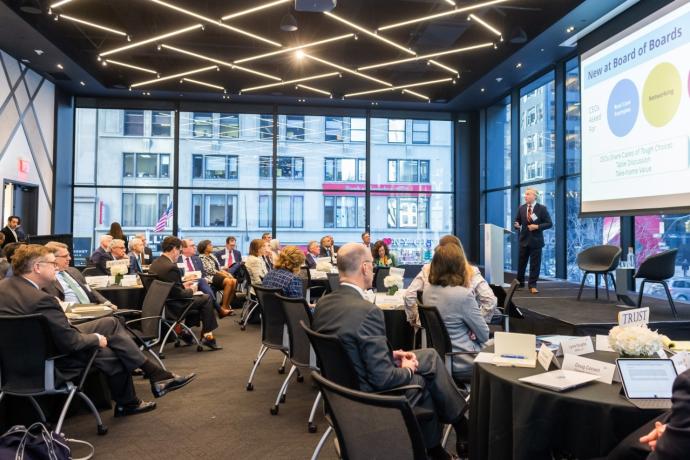 Fifty CEOs who are a part of Chief Executives for Corporate Purpose (CECP)—a coalition of over 200 of the world’s largest companies that represent more than $6.6 trillion in revenues, $21.2 billion in social investment, 23 million hours of employee volunteerism, and $15 trillion in assets under management—met at CECP’s Board of Boards to examine the tough choices CEOs have to make when deciding between integrity, action, and the bottom line. A benefit of being a CECP CEO, the event provides the opportunity for peers to discuss the business imperative for infusing stakeholder needs into core business strategy.

For the first time, CEO signatories of the 2019 Business Roundtable Statement on the Purpose of a Corporation discussed their motivations for signing, reactions it has generated among stakeholders, and how the CEOs are putting the tenets of the statement into action at their companies. See video, here. Speakers included:

“This year’s Board of Boards presented a vital learning opportunity grounded in a new ecosystem of business expectations and practices,” said Daryl Brewster, CEO, CECP. “The cases discussed will equip leaders of the world’s largest companies with lessons from their peers for addressing tough decisions through the lens of stakeholder capitalism. We know from CEO feedback that they go back to their offices with questions to ask and steps to take.”

The three-hour event featured a series of conversations presented as case studies by leading CEOs including:

During a series of conversations, CEOs debated the tough decisions that need to be made during pivotal points in a company’s timeline, including the cultural impacts of business decisions, risk management, the role of personal values in corporate strategy, and adapting to current consumer expectations.  See photos from the event.

Carly Fiorina, former HP CEO, was presented with the Lawrence A. Wien Legacy Force for Good Award the evening before at the Chairman’s Dinner, hosted by Doug Conant, Founder and CEO, ConantLeadership; former CEO, Campbell Soup Company; former Chairman, Avon Products; and Chairman, CECP. Fiorina was honored for her commitment to inspire, equip, and connect individuals and teams to seize opportunities, face challenges, and accelerate impact in their communities and places of work.

Following the Board of Boards, CECP hosted the 8thCEO Investor Forum, convening in the same venue. CEOs of Aptiv PLC, Henry Schein, Inc., Philip Morris International, Verisk Analytics, and Welltower presented to more than 250 investors focused on the long-term. Presentations were live-streamed and can be watched anytime. See photos from the event. Email Nandika Madgavkar to sign a CEO up to make a long-term presentation.

About CECP: The CEO Force for Good

Chief Executives for Corporate Purpose (CECP) is a CEO-led coalition that believes that a company’s social strategy — how it engages with key stakeholders including employees, communities, investors, and customers —determines company success. Founded in 1999 by actor and philanthropist Paul Newman and other business leaders to create a better world through business, CECP has grown to a movement of more than 200 of the world’s largest companies that represent $6.6 trillion in revenues, $21.2 billion in societal investment, 14 million employees, and $15 trillion in assets under management. CECP helps companies transform their social strategy by providing customized connections and networking, counsel and support, benchmarking and trends, and awareness building and recognition. For more information, visit http://cecp.co.

The Committee Encouraging Corporate Philanthropy (CECP) is the only international forum of business leaders focused on increasing the level and quality of corporate philanthropy. Membership includes more than 180 global CEOs and chairpersons of companies that collectively account for more than 40% of reported corporate giving in the United States. Membership is by invitation and is renewed annually.

Founded in 1999 by actor and philanthropist Paul Newman, together with John Whitehead, Peter Malkin, and other business leaders, CECP continues to inspire and challenge leaders in the private sector to find innovative ways to fulfill unmet social needs and to lead the way towards better alignment of business and social strategies.