Agreement is first of its kind globally for the automaker; Home of the Union and Union II to become Subaru Park 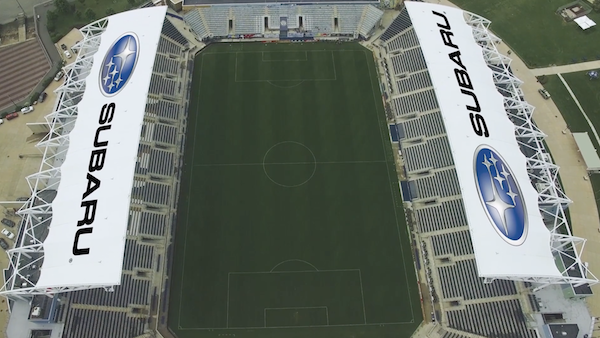 Subaru of America and the Philadelphia Union announce a multi-year stadium naming rights agreement with the core of the partnership geared toward the development of community programs that enhance the greater Philadelphia community.

Philadelphia Union and Subaru of America, Inc. today announced a multi-year stadium naming rights partnership in a global first for the automaker. As a part of the partnership, the home of the Union will be named Subaru Park, an 18,500-seat sports and events destination in the greater Philadelphia area. Subaru will become the official and exclusive automotive partner of the Philadelphia Union. Additionally, the two companies have jointly made a commitment to the greater Philadelphia community that will produce a series of charitable programs as an extension of the Subaru Love Promise vision.

The agreement between the Union and Subaru marks the first time the leading automaker has entered into a partnership with a major league sports team, domestically and globally. Extending beyond a naming rights agreement, the core of the partnership is the development of community programs that enhance the greater Philadelphia community where both organizations are headquartered. The programs will benefit causes centered around youth soccer, pediatric cancer, pet adoption, and environmental sustainability.

“Today is the start of a historic new chapter for the Philadelphia Union, both with the inauguration of our 2020 season at Subaru Park and in the official beginning of our relationship with Subaru of America, a partner that shares in our vision for a better future for our fans and surrounding community,” said Tim McDermott, Philadelphia Union President. “Subaru of America has consistently exemplified a passionate commitment to the community and bringing people together, which is a core value upon which our club was founded. We are committed to working hand-in-hand to give back and create a better world for our fans and the people of the Greater  Philadelphia area.”

“When organizations unite for the greater good, everyone wins, which is why we at Subaru of America are excited to come together with our local professional soccer team, the Philadelphia Union, under a shared goal to do good and strive for the betterment of our local communities,” said Thomas J. Doll, President and CEO, Subaru of America, Inc. “This partnership extends the reach of our commitments to improve the lives of people in our community. Subaru of America, along with our retailers and the Philadelphia Union, will develop community programs that will directly tie to our Subaru Love Promise initiatives.”

At the center of the agreement is a commitment to the community through outreach programs as a part of the Subaru Love Promise company vision. Those initiatives include:

In addition to becoming Subaru Park and adding new dynamic signage, the Union’s home will receive numerous additional improvements ahead of the 2020 season, including:

OVG Global Partnerships served as the naming rights agency for the Philadelphia Union and was instrumental in the creation of this partnership.  For more information, please visit www.philadelphiaunion.com.

ABOUT SUBARU LOVE PROMISE
The Subaru Love Promise is just that. A promise. It is a promise to do right by our community by partnering with nonprofit education, health, community, environment, and animal organizations - to set Subaru apart through our deeds and the deeds of our partners. To be unlike any other car company by doing what is right and good, just for the sake of doing it.

ABOUT SUBARU OF AMERICA, INC.
Subaru of America, Inc. (SOA) is a wholly owned subsidiary of Subaru Corporation of Japan. Headquartered at a zero-landfill office in Camden, N.J., the company markets and distributes Subaru vehicles, parts and accessories through a network of more than 630 retailers across the United States. All Subaru products are manufactured in zero-landfill production plants and Subaru of Indiana Automotive, Inc. is the only U.S. automobile production plant to be designated a backyard wildlife habitat by the National Wildlife Federation. SOA is guided by the Subaru Love Promise, which is the company’s vision to show love and respect to everyone, and to support its communities and customers nationwide. Over the past 20 years, SOA has donated more than $165 million to causes the Subaru family cares about, and its employees have logged more than 40,000 volunteer hours. As a company, Subaru believes it is important to do its part in making a positive impact in the world because it is the right thing to do.

ABOUT PHILADELPHIA UNION
The Philadelphia Union is an innovative, forward-thinking professional soccer club competing in Major League Soccer (MLS) and one of Philadelphia’s five major league sports teams. Driven by unprecedented fan support, MLS awarded the Philadelphia expansion franchise rights to Jay Sugarman in 2008 and the Union kicked off its inaugural season in 2010. The club has reached the finals of the Lamar Hunt U.S. Open Cup in 2014, 2015 and 2018, and has appeared in the MLS Cup Playoffs in 2011, 2016, 2018 and 2019.

The Union play at Subaru Park in Chester, PA on the banks of the Delaware River. The custom-built stadium is part of the Union’s unique waterfront campus, featuring an historic power plant rebuilt into a 500,000 sq. ft. creative office building, a state-of-the-art Training Complex, over 7 acres of professional grade practice pitches and multiple onsite parking fields. For more information about the Philadelphia Union, visit www.philadelphiaunion.com and follow @PhilaUnion on Twitter or Instagram.