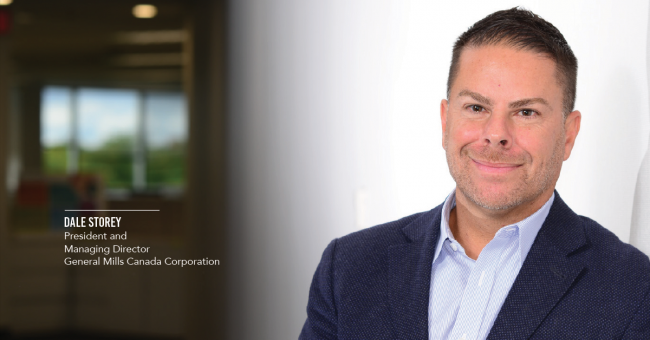 This article originally appeared in United Way’s 2019 Local Leader List in the Globe and Mail on November 9, 2019.

Most weekday mornings, Dale Storey goes to the gym at 5 a.m., has a protein shake afterwards and enjoys a bowl of cereal when he arrives at his desk. It’s a breakfast routine that’s become ingrained for the President and Managing Director of General Mills Canada Corporation.

But as a leader of one of the world’s largest food companies, Storey also knows that far too many kids—and their families—don’t always get to look forward to a nourishing breakfast. In fact, hunger is an #UNIGNORABLE issue around the world—and closer to home in Mississauga, where the company is headquartered.

In Peel Region alone, there are more than 60,000 households that experience food insecurity. In seven years alone, the average price of food for a family of four has also skyrocketed, jumping by more than 25 per cent. “I was astounded when I heard that nearly a million kids go to school without breakfast every day across Canada,” says Storey.

Food, he adds, is about so much more than feeding hunger. Without it, kids can’t concentrate in school, and adults are forced to make difficult choices—like choosing between buying groceries and paying the rent. Hunger is also much less visible in Peel. “Poverty manifests itself differently here. You might see a family of four at the grocery store and they're buying groceries, but when they get back to their apartment, they can't take their winter jackets off because they needed to make a trade-off between heat and food,” says Storey.

That’s why General Mills is investing $1 million to increase access to nutritious, culturally-appropriate and affordable food in Peel, supporting a number of local programs and initiatives. “We wanted something that was going to be more holistic, thoughtfully developed and could have a sustainable impact. United Way has the breadth and the depth in the community to really know where the best places are to invest,” says Storey.

And the best part? General Mills employees are proud to be part of cooking up change in the places they live, work and raise their families. “Being a force for good has been in the DNA of this company for 150 years. If there’s one value that hasn’t changed, it’s doing the right thing—all the time,” says Storey.