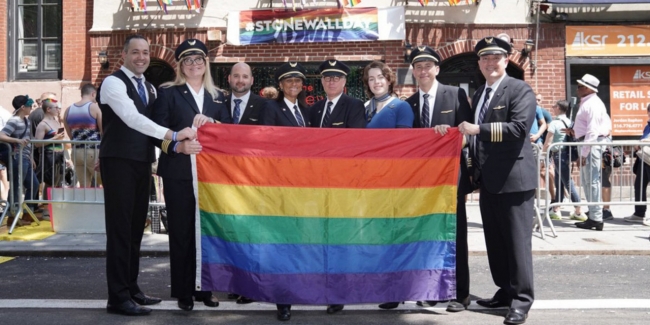 United Airlines today announced it has received a perfect score of 100% on the 2020 Corporate Equality Index (CEI), a premier benchmarking survey and report on corporate policies and practices related to LGBTQ+ workplace equality, administered by the Human Rights Campaign (HRC) Foundation. This is the ninth consecutive year the airline received a 100% score.

"United is proud to receive this recognition as it speaks to our commitment to not only promoting an LGBTQ+-friendly workplace but LGBTQ+-friendly skies," said Kate Gebo, United's Executive Vice President of Human Resources and Labor Relations. "We will continue working with organizations like the Human Rights Campaign to help champion LGBTQ+ inclusion because United believes in breaking down barriers to create a more welcoming world for all who explore it."

"The impact of the Human Rights Campaign's Corporate Equality Index over its 18-year history is profound. In this time, the corporate community has worked with us to adopt LGBTQ+-inclusive policies, practices and benefits, establishing the Corporate Equality Index as a primary driving force for LGBTQ+ workplace inclusion in America and across the globe," said HRC President Alphonso David. "These companies know that protecting their LGBTQ+ employees and customers from discrimination is not just the right thing to do -- it is also the best business decision."

United has partnered with the Human Rights Campaign on training initiatives including educating employees about preferred pronouns and the persistence of gender norms and other steps to make United an inclusive space for both customers and employees. The airline's latest efforts include developing comprehensive training modules and exercises to continue employee education on how to be a better ally in both the workplace and to customers. Over the past year, United has also opened more LGBTQ+ Business Resource Groups across the country, reaching more employees.

Alongside partner organizations, customers and employees, United will continue working to build the world's most inclusive airline. For more information on United's commitment to diversity and inclusion, visit https://hub.united.com/diversity-inclusion-fact-sheet/.

United continues to strengthen its commitment to its customers, looking at every aspect of its business to ensure that the carrier keeps customers' best interests at the heart of its service. In addition to today's announcement, United recently:

United's shared purpose is "Connecting People. Uniting the World." We are more focused than ever on our commitment to customers through a series of innovations and improvements designed to help build a great experience: Every customer. Every flight. Every day. Together, United and United Express operate approximately 4,900 flights a day to 362 airports across six continents. In 2019, United and United Express operated more than 1.7 million flights carrying more than 162 million customers. United is proud to have the world's most comprehensive route network, including U.S. mainland hubs in Chicago, Denver, Houston, Los Angeles, New York/Newark, San Francisco and Washington, D.C. United operates 791 mainline aircraft and the airline's United Express partners operate 581 regional aircraft. United is a founding member of Star Alliance, which provides service to 195 countries via 26 member airlines. For more information, visit united.com, follow @United on Twitter and Instagram or connect on Facebook. The common stock of United's parent, United Airlines Holdings, Inc., is traded on the Nasdaq under the symbol "UAL".