PepsiCo to Achieve 100% Renewable Electricity in the U.S. 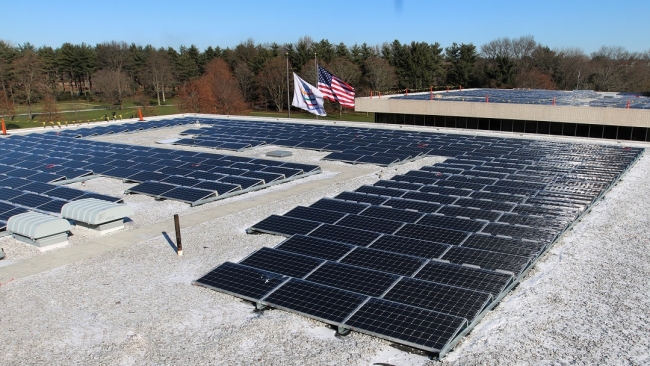 Some of America’s favorite snacks and beverages – from Lay’s and SunChips to bubly, Gatorade and Pepsi – will soon be made using electricity from renewable sources, such as wind and solar. PepsiCo, Inc. (NASDAQ:PEP) today announced plans to achieve 100% renewable electricity for its U.S. direct operations this year. The U.S. is the food and beverage company’s largest market and accounts for nearly half of its total global electricity consumption.

PepsiCo’s efforts in the U.S. build upon its global progress in switching to renewable electricity around the world. For example, nine countries in PepsiCo's European direct operations already meet 100% of their electricity demand from renewable sources. Additionally, in 2018, 76% of the electricity needs of the PepsiCo Mexico Foods business were delivered via wind energy.

“We have entered a decade that will be critical for the future of our planet’s health,” said Ramon Laguarta, Chairman and Chief Executive Officer, PepsiCo. “PepsiCo is pursuing 100% renewable electricity in the U.S. because the severe threat that climate change poses to the world demands faster and bolder action from all of us.”

PepsiCo’s shift to renewable electricity in the U.S. this year is expected to deliver a 20% reduction in company-wide direct operations (Scopes 1 and 2) greenhouse gas (GHG) emissions relative to a 2015 baseline. This represents a significant contribution to the company’s goal of reducing absolute GHG emissions across its global value chain by 20% by 2030 against a 2015 baseline.

“As an industry leader, we have a responsibility to help spur the use of renewable energy in the U.S., while encouraging the kind of systemic change that can build a more sustainable food system. This is another step forward in that journey,” said Simon Lowden, Chief Sustainability Officer, PepsiCo.

To achieve 100% renewable electricity, PepsiCo plans to target a diversified portfolio of solutions. These include Power Purchase Agreements (PPAs) and Virtual Power Purchase Agreements (VPPAs), which finance the development of new renewable electricity projects such as solar and wind farms, as well as renewable energy certificates (RECs), which are credits certified by independent third parties that support existing green electricity generation from renewable sources. In 2020, PepsiCo’s portfolio will feature more RECs, then will gradually move toward PPAs and VPPAs by 2025.

Alongside these measures, PepsiCo continues to expand its onsite renewable electricity. The company recently installed new solar panels at its global headquarters in Purchase, N.Y., complementing other solar energy installations throughout the country. These include Frito-Lay facilities in Modesto, CA and Casa Grande, AZ, as well as PepsiCo beverage facilities in Fresno, CA and Tolleson, AZ, among others.

PepsiCo products are enjoyed by consumers more than one billion times a day in more than 200 countries and territories around the world. PepsiCo generated more than $64 billion in net revenue in 2018, driven by a complementary food and beverage portfolio that includes Frito-Lay, Gatorade, Pepsi-Cola, Quaker, and Tropicana. PepsiCo's product portfolio includes a wide range of enjoyable foods and beverages, including 22 brands that generate more than $1 billion each in estimated annual retail sales.

Guiding PepsiCo is our vision to Be the Global Leader in Convenient Foods and Beverages by Winning with Purpose. "Winning with Purpose" reflects our ambition to win sustainably in the marketplace and embed purpose into all aspects of the business. For more information, visit www.pepsico.com.

This release contains statements reflecting our views about our future performance that constitute "forward-looking statements" within the meaning of the Private Securities Litigation Reform Act of 1995. Forward-looking statements are generally identified through the inclusion of words such as "aim," "anticipate," "believe," "drive," "estimate," "expect," "goal," "intend," "may," "plan," "project," "strategy," "target" and "will" or similar statements or variations of such terms and other similar expressions. Forward-looking statements inherently involve risks and uncertainties that could cause actual results to differ materially from those predicted in such statements, including changes in demand for PepsiCo's products, as a result of changes in consumer preferences or otherwise; changes in laws related to the use or disposal of plastics or other packaging of PepsiCo's products; changes in, or failure to comply with, applicable laws and regulations; imposition or proposed imposition of new or increased taxes aimed at PepsiCo's products; imposition of labeling or warning requirements on PepsiCo's products; PepsiCo's ability to compete effectively; political conditions, civil unrest or other developments and risks in the markets where PepsiCo's products are made, manufactured, distributed or sold; the ability to protect information systems against, or effectively respond to, a cybersecurity incident or other disruption; increased costs, disruption of supply or shortages of raw materials and other supplies; business disruptions; damage to PepsiCo's reputation or brand image; loss of, or a significant reduction in sales to, any key customer; disruption to the retail landscape, including rapid growth in hard discounters and the e-commerce channel; climate change or water scarcity, or legal, regulatory or market measures to address climate change or water scarcity; and other factors that may adversely affect the price of PepsiCo's publicly traded securities and financial performance. For additional information on these and other factors that could cause PepsiCo's actual results to materially differ from those set forth herein, please see PepsiCo's filings with the Securities and Exchange Commission, including its most recent annual report on Form 10-K and subsequent reports on Forms 10-Q and 8-K. Investors are cautioned not to place undue reliance on any such forward-looking statements, which speak only as of the date they are made. PepsiCo undertakes no obligation to update any forward-looking statements, whether as a result of new information, future events or otherwise.

PepsiCo products are enjoyed by consumers one billion times a day in more than 200 countries and territories around the world. PepsiCo generated more than $66 billion in net revenue in 2014, driven by a complementary food and beverage portfolio that includes Frito-Lay, Gatorade, Pepsi-Cola, Quaker and Tropicana. PepsiCo's product portfolio includes a wide range of enjoyable foods and beverages, including 22 brands that generate more than $1 billion each in estimated annual retail sales.

At the heart of PepsiCo is Performance with Purpose - our vision to deliver financial performance over the long term by integrating sustainability into its business strategy, leaving a positive imprint on society and the environment. We do this in part by offering a wide range of products; increasing the number of our nutritious foods and beverages; reducing our environmental impacts; and supporting our employees and the communities where we do business; all of which will help position the company for long-term sustainable growth. For more information, visit www.pepsico.com.