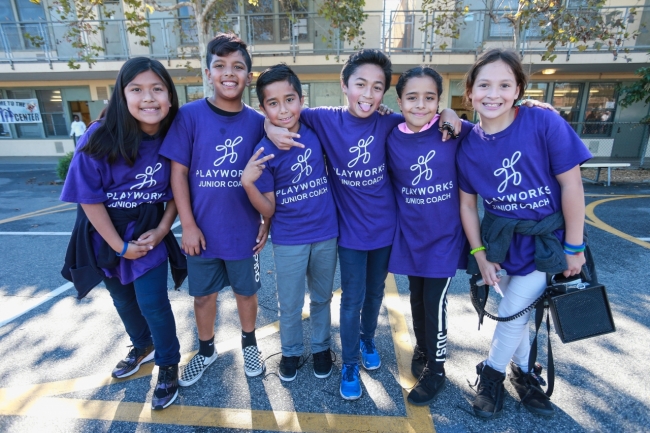 The AEG Community Foundation awards Playworks $25,000 as winners of its 2019 #SpreadCheer Challenge.

AEG, the world’s leading sports and live entertainment company, today announced that Playworks, a national nonprofit that supports learning and physical health by providing safe and inclusive play to low-income students in urban schools, has been awarded $25,000 from the AEG Community Foundation as the winner of the 2019 #SpreadCheer Challenge.

The AEG Community Foundation launched the 2019 #SpreadCheer Challenge on November 18, 2019, which allowed three participating non-profit organizations -- Boys & Girls Clubs of America,  Playworks and Special Olympics USA – to engage their communities to complete a digital puzzle which generated points that users then awarded to one of the three charities; the winner being the organization with the most points.

“We are thrilled to be the winners of this year’s #SpreadCheer Challenge and to receive $25,000 from our invaluable partner and community collaborator, the AEG Community Foundation,” said Celeste Soto, Director of Development, Playworks. “AEG’s #SpreadCheer Challenge enabled us to engage Playworkers throughout the country and our local school communities to celebrate this special time of year through the power of play, just as our organization leverages play to develop safe, inclusive and meaningful play environments at more than 200 schools every day.”

“The AEG Community Foundation's contribution and continued support of Playworks will allow our organization to continue to develop a place for every child on the playground to feel included, be active, and build valuable social and emotional skills throughout Southern California," said Soto.

Over the past three years, AEG has partnered with Playworks in schools in the Los Angeles area through activations with the LA Galaxy and Dignity Health Sports Park as well as serving as the official partner for AEG’s annual Service Day for the past two years, during which AEG brought more than 300 employees to two elementary schools in the greater Los Angeles area to beautify the campus and engage with students during recess.

“Playworks has been a fantastic community partner and we’ve enjoyed growing our relationship with them over the years to advance the important work they do for children and communities throughout the country,” said Martha Saucedo, Executive Vice President, External Affairs, AEG. “AEG is committed to giving back to the communities where we do business and we are proud to partner with all three participating #SpreadCheer Challenge organizations.”

Over the past 10 years, AEG has contributed more than $120 million in direct financial and in-kind support to community and civic programs with a focus on children and youth in the areas of education, the arts and health and wellness.  To find out more about AEG 1Community and the AEG Community Foundation, click here.

ABOUT AEG
Headquartered in Los Angeles, California, AEG is the world's leading sports and live entertainment company. The company operates in the following business segments: Facilities, which through its affiliation with ASM Global, owns, manages or consults with more than 300 preeminent arenas, stadiums, convention centers and performing arts venues around the world; Music through AEG Presents, which is dedicated to all aspects of live contemporary music performances, including producing and promoting global and regional concert tours, music and special events and world-renowned festivals such as the Coachella Valley Music and Arts Festival; Real Estate, which develops world-class venues, as well as major sports and entertainment districts like STAPLES Center and L.A. LIVE, Mercedes Platz in Berlin and The O2 in London; Sports, as the world's largest operator of high-profile sporting events and sports franchises including the LA Kings, LA Galaxy and Eisbären Berlin; and Global Partnerships, which oversees worldwide sales and servicing of sponsorships including naming rights, premium seating and other strategic partnerships. Through its worldwide network of venues, portfolio of powerful sports and music brands and its integrated entertainment districts, AEG entertains more than 160 million guests annually. More information about AEG can be found at www.aegworldwide.com.