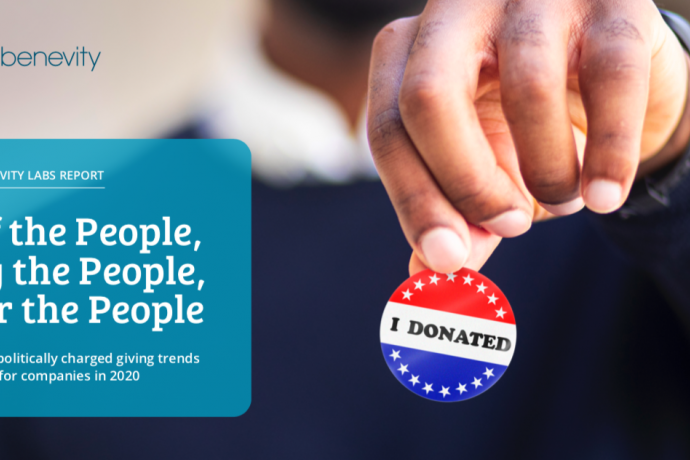 Benevity, Inc., the global leader in corporate social responsibility (CSR) and employee engagement software, today released a report analyzing how current hot button political and social issues are impacting the charitable giving patterns of today’s top corporations. The report, which analyzes more than three years of data on workplace giving from 350 Benevity clients and more than 1 million of their people, shows that while traditional charities continue to dominate the list of top ten causes receiving donations annually overall, spikes in donations to politically charged causes are indicative of which social issues are likely to ignite people’s passions during the 2020 U.S. presidential election.

Focusing on donations made through the Benevity platform from January 2016 through September 15, 2019, the Benevity report looked at activity related to key themes appearing in the ten biggest news stories of 2018 according to Google Trends: income inequality, immigration, women’s rights, climate change and gun safety. Surprisingly, while these issues are dominating the news cycle and already shaping the 2020 U.S. elections, they only account for less than 10 percent of action, measured by donation volume to related causes. These five cause categories do, however, represent the largest momentary spikes in giving activity, suggesting an ongoing shift in how people are responding to real-time events—through purpose-driven, in-the-moment action.

In its 2017 Cause Rank Shift report, Benevity found that the 2016 election cycle kicked off a major shift in corporate giving trends, as more politically active organizations like the ACLU and immigrants rights groups like Islamic Relief Worldwide saw an increase in attention, appearing in the top ten list of causes for the first time ever. (For example, in the months following the 2016 election, donations to the ACLU jumped 330 percent). The 2019 report shows spikes in reactionary giving following politically charged events continuing to the tune of $332 million in total donations, even as the top causes have stabilized, with fewer shifts in the rankings.

Following are key findings of the report across each of the issues analyzed:

“This data highlights a critical opportunity for companies to go further in authentically addressing the underlying drivers behind some of society’s biggest issues while meeting the deep need for people to be part of something bigger than themselves,” said Bryan de Lottinville, Benevity Founder and CEO. “As we’ve seen by the recent push for a broader definition of corporate purpose, the time has come for companies to leverage the trust invested in them to create change, improve the state of the world, and in the process, win loyalty of their employees, customers and communities. ”

Download the full Benevity Labs report: Of the people, by the people, for the people: What politically charged giving trends mean for companies in 2020.

Benevity, Inc., a certified B Corporation, is the global leader in corporate social responsibility and employee engagement software, including online giving, matching, volunteering, community investment and purpose driven actions. Many of the world’s most iconic brands rely on Benevity’s award-winning cloud solutions to power corporate “Goodness” programs that attract, retain and engage today’s diverse workforce by connecting people to the causes that matter to them. With software that is available in 17 languages, to an employee base of 12 million users around the world, Benevity has processed almost 4 billion dollars in donations and 23 million hours of volunteering time to almost 200,000 charities worldwide.